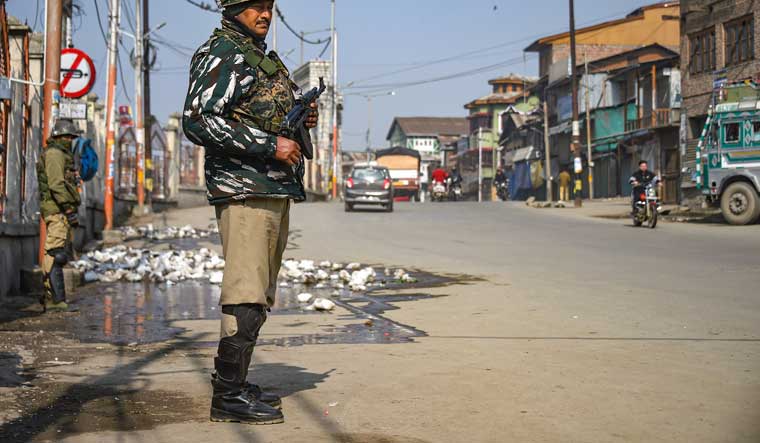 Protests were held across Jammu on Saturday against the recent killing of civilians by terrorists with some Kashmiri Pandit families, returning from the Valley, demanding stern action against the culprits and adequate security for the minorities.

At least seven people were killed by terrorists in Kashmir Valley in five days. Of those killed, four belonged to minority communities. Six of the deaths were reported in Srinagar.

"I have been working as a teacher for the last 20 years and returned to the Valley after a promotion a few years ago. The situation suddenly turned worse due to the selective killings and we came back," a Kashmiri pandit said.

He claimed that during the last three years of his posting in the Kashmir region, he did not face any problem.

"We lived like brothers with my Muslims colleagues and neighbours," he said and claimed that many Kashmiri Pandits families, including those who were provided jobs under the Prime Minister's package, have returned to Jammu now.

Sanjay Bhat, who also reached his Jagti accommodation on Saturday, said the minorities in the Valley were being haunted by fear following the recent killings.

"There is fear among the minorities in the Valley like that we saw in 2016 (in the wake of the killing of Hizbul Mujahideen terrorist Burhan Wani which triggered widespread protests across Kashmir). We are back in Jammu despite abrogation of Article 370 provisions," he said.

Another Kashmiri Pandit migrant said he did not want to go back to the Valley.

He said the government should take steps to restore faith among the minorities before asking them to return to Kashmir Valley.

Another teacher said they were asked to report to the Kheer Bhawani temple by the zonal education officer Ganderbal through an official order.

"In another order, we were exempted from reporting for our duty... there was no mention of food. We feel it is better to leave rather than die of starvation," he said.

Another person claimed that nothing has changed in Kashmir Valley over the years.

"The situation today is same as what we faced when we left en mass in 1990. My two sons working in the Kupwara district in the Kashmir region are returning and are likely to reach within the next few hours," he said, heaving a sigh of relief.

A group of migrant Pandits affiliated with Panun Kashmir took out a candlelight march at the exhibition ground in the heart of Jammu city on Saturday evening to pay homage to the community members slain by terrorists.

"The government must review the security apparatus and create a conducive atmosphere for the minorities living in the Valley," a spokesperson of Panun Kashmir said.

He asked the government to have a relook at the resettlement package for the community and talk to their representatives before finalizing the draft.

Activists of the Bajrang Dal and Dogra Front also staged protests against the killings at separate places in Jammu city.

Supinder Kaur, a Srinagar-based Sikh, and Chand, a Hindu from Jammu, were killed two days after The Resistance Force, a shadow outfit of the banned Lashkar-e-Taiba, claimed responsibility for the deaths of three people on Tuesday.

Makhan Lal Bindroo, a prominent Kashmiri Pandit and owner of Srinagar's most famous pharmacy, was shot dead at his shop that evening. Minutes later, a 'chaat' vendor, Virendra Paswan from Bihar, was gunned elsewhere in the city. Almost simultaneously, another civilian, Mohammad Shafi Lone, was killed at Naidkhai in Bandipora.