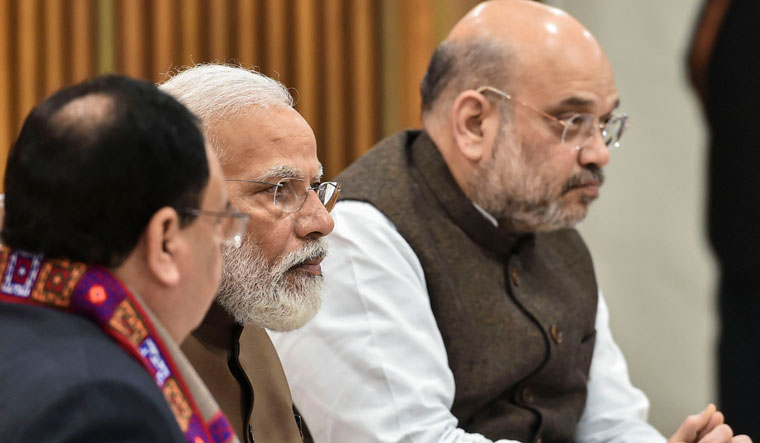 Congress questioned the silence of the Narendra Modi-led Union government over the massive haul of drugs (heroin) at the Adani port in Gujarat and sought a detailed probe into the case by a sitting judge of the Supreme Court to "unmask" the "real perpetrators" of the crime.

Addressing a press conference in Bengaluru on Monday, spokesperson Supriya Shrinate said the drug haul was a matter of "grave concern" as it impacted every individual and was a threat to the national security, too. "It is a huge drug syndicate operating in the country. Seventeen days back, around 3,000 kg of heroin worth Rs 21,000 crore was seized in Gujarat's Adani Mundra seaport. The heroin classified as semi-cut talcum powder was imported from Afghanistan by Visakhapatnam-based Aashi Trading Company.  The owners of the company - Sudhakar Machavaram and Govindaraj Vaishali, who paid a meagre Rs 4 lakh for the consignment - have been arrested. But the real owners of the consignment are still unknown. It is impossible to believe such a small company has imported such huge quantity of heroin," Shrinate said, adding that it was not the first time that the Adani port had reported import of drugs.

"On June 9, 2021, the same company was involved in importing 25,000 kg of heroin into Gujarat from Afghanistan which was sent by M/s Hassan Hussain limited. The entire consignment of drugs has been distributed in India now. The Modi government had promised 14 crore jobs to our youth. But what they have been given is the white powder."

Shrinate, who posed 10 questions to the Modi government, said, "Where is the outrage by the government or the media. Last year, there was massive outrage in the mainstream media and rightly so after two grams of drugs was found in Bollywood. All A-listers of Bollywood were put in the dock, named, shamed and brazenly accused without proof of being drug peddlers. And today, 3,000kg of heroin is seized and there is not a word about it.”

Expressing suspicion over the drug haul, the Congress leader asked, "Do you believe such a small trading company in Andhra Pradesh can bring in such huge consignment of drugs without official patronage at the highest office? You will be surprised to know that the Narcotics Control Bureau, the apex agency to clamp down on the drug cartels has not had a director-general for the last 18 months. Even the consignment in question was seized during a routine check by the department of revenue intelligence and not by any strategic search operation. So, at no level of the government, has there been a concerted effort to know who is bringing these drug consignments, where it is going or the fact that it is coming from Afghanistan which is now in the hands of the Taliban."

Noting that the special court dealing with cases related to Narcotic Drugs and Psychotropic Substances in Bhuj had directed the DRI to investigate if the Adani port has profiteered from import of the consignment, Shrinate sought to know what the premier agencies like NCB, DRI, ED or the CBI were doing. "Will these agencies be used only to settle petty political scores and for toppling democratically elected governments? Isn't this a matter of concern as the national security is threatened? Why is the government conspicuously silent over this issue? Why is there no probe against the Adani port despite the Bhuj court directions? Why has Gujarat become the preferred drug inroad into India? Why is the full-time position of an NCB director general lying vacant for so long? Why shouldn't there be a probe by a sitting judge of the Supreme Court in a matter that could put the future of an entire generation in jeopardy?" she asked.