Govt calls the bill historic, says 671 castes will benefit from it 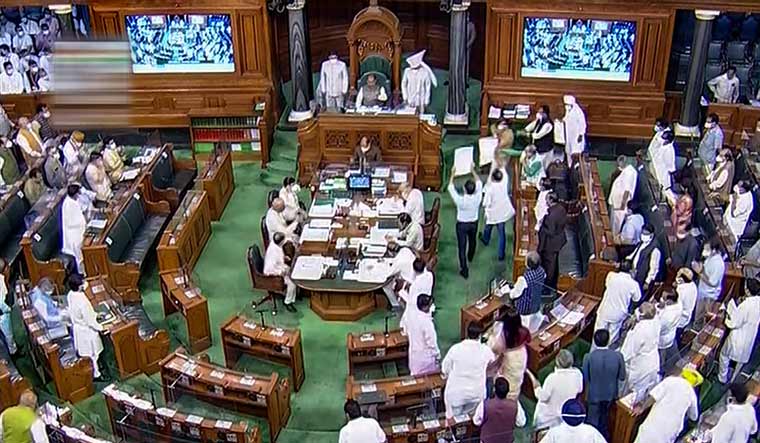 Lok Sabha on Tuesday passed a Constitution amendment bill to restore the power of states to make their own OBC lists after a thaw in the logjam as Opposition parties backed the legislation but demanded the removal of the 50 per cent cap on reservation and many of them also called for a caste-based census.

With the Opposition seeking to corner the ruling BJP over the sensitive issue of quota, Social Justice and Empowerment Minister Virendra Kumar said there is a need for careful examination of the demand made by several Lok Sabha members for increasing the cap of reservation beyond 50 per cent as constitutional issues are involved.

For the first time since the Monsoon session of Parliament began on July 19, Lok Sabha witnessed a debate in an orderly manner as the Opposition put its protests demanding a debate over the Pegasus snooping allegations on hold for The Constitution (One Hundred and Twenty-Seventh Amendment) Bill, 2021 which was passed with 385 members voting in support and no member opposing it.

The bill was passed as the 105th Constitution Amendment bill after being renumbered. Due to Covid protocols, some members of the House were seated in visitors galleries and therefore the division on amendments and the passage of the bill was conducted manually using slips.

Moving the bill for consideration and passage, Kumar described the  bill as a historic legislation as 671 castes in the country would benefit from it.

The 102nd Constitution Amendment Act of 2018 inserted articles 338B, which deals with the structure, duties and powers of the National Commission for Backward Classes, and 342A that deals with the powers of the president to notify a particular caste as Socially and Educationally Backward Communities (SEBCs) and the power of Parliament to change the list. Article 366 (26C) defines SEBCs.

The Supreme Court had dismissed the Centre's plea seeking a review of its May 5 majority verdict that held that the 102nd Constitution amendment took away the states' power to notify SEBCs for the grant of quota in jobs and admissions.

Many leaders such as BJP ally JD(U)'s Lalan Singh, Samajwadi Party's Akhilesh Yadav, BSP's Ritesh Pandey and DMK's T R Baalu pitched for a caste-based census be conducted throughout the country.        Several Opposition parties, including the Congress, demanded a removal of the 50 per cent cap on reservations, while the government underlined its commitment to social justice.

Initiating the debate, Congress leader in Lok Sabha Adhir Ranjan Chowdhury extended his party's wholehearted support to the bill but criticised the government for the 2018 amendment, saying had the government inserted the suggestion proposed by the Opposition, today's situation would not have arisen.

"You tweaked the Constitution by bringing the 102 Constitution Amendment Bill in 2018 which gave people opportunity to go to the court and finally the Supreme Court removed the states' power," he said.

Chowdhury also slammed the government for allegedly running away from debate on the issue of "snooping" through the Pegasus spyware, saying the country after country like Hungary, the US and Israel have ordered probe into the controversial issue.

Replying to the debate, Kumar said there is a need for careful examination of the demand made by several Lok Sabha members for increasing the cap of reservation beyond 50 per cent as constitutional issues are involved.

The government is aware of the wishes of the members, he said.

It has been repeatedly emphasised (by courts) that the reservation cap should be retained at 50 per cent. "Therefore, it is necessary to carefully examine all constitutional and legal aspects in this regard," the minister said.

He stated that in the Indra Sawhney case, the court has observed that the limit can be increased beyond 50 per cent only in certain special circumstances.

Intervening in the debate, Labour and Employment Minister Bhupender Yadav asserted that maximum measures to have been taken at a fast pace to ensure justice for Dalits, OBCs and the poor by the Modi government.

"When for the first time a non-Congress government came to power, the Janata Party, the Mandal Commission was created. It had submitted its report in 1980 and you (the Congress) ran the government after that but did not implement it and did not give reservation to backward classes," Yadav said.

Hitting out at the UPA, Yadav said that it was in power from 2004-14 but did not give constitutional status to the commission for backward classes which was also done by the Modi government.

"This bill seeks to fulfil the basic aim and spirit of our constitution makers to build a country in which people get social, economic and political justice on the basis of equality," he said.

Participating in the discussion, Supriya Sure (NCP) said the credit should for this amendment bill should be given to the Maharashtra government which requested the Centre to do address the issue of OBC reservation.

Sule said another important issue along with this legislation is to address the 50 per cent ceiling on reservation without which the amendment will not fully resolve the issue. YSR Congress Party and Shiv Sena also voiced support for the bill.

All India Majlis-e-Ittehad-ul-Muslimeen Asaduddin Owaisi accused the government of using OBCs as a vote bank, saying little has been done to uplift the community in actual terms. He also turned to the Treasury benches and used the Hindi song line -- "jab pyaar kiya toh darna kya" while exhorting the government to remove the 50 per cent cap on reservation.

Harsimrat Kaur Badal (SAD) wanted the House to discuss the issue of farmers who have been sitting on the roads for months. She said although the government had promised income of farmers but it has ended up increasing prices causing more hardship to the poor.

The Constitution amendment bill requires that there should be a majority of the total membership of the House and by a majority of not less than two-thirds of the members of that House present and voting.