It extends the life of existing medical Oxygen cylinders 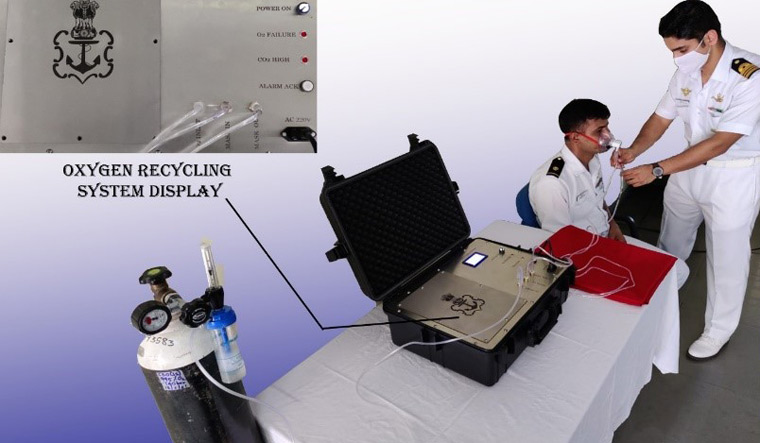 The Diving School of the Southern Naval Command of the Indian Navy has conceptualised and designed an 'oxygen recycling system' (ORS) to to help reduce the Oxygen crisis in the wake of the second wave of COVID-19.

The ORS, configured with the help of some of the the concepts used in the diving sets in the school, is designed to extend the life of the existing medical Oxygen cylinders by two to four times. The concept behind the design is that only a small percentage of Oxygen inhaled by a patient is actually absorbed by the lungs, while the rest being exhaled into the atmosphere along with Carbon dioxide produced by the body. This exhaled Oxygen can be re-used, provided the exhaled Carbon dioxide is removed.

The ORS adds a second pipe to the patient’s existing Oxygen mask, which sucks out the air exhaled by the patient using a low-pressure motor. Both the mask inlet pipe for Oxygen and the mask outlet pipe for exhaled air are fitted with non-return valves to maintain a positive pressure and unidirectional flow of gases at all times to ensure the patient's safety against dilution hypoxia. The exhaled gases, mainly Carbon dioxide and Oxygen, are then fed into a bacterial viral filter and heat and moisture exchanger filter (BVF-HME filter) to absorb any viral contaminants. After this viral filtration, the gases pass through a high-grade Carbon dioxide scrubber with a high efficiency particulate air (HEPA) filter, which absorbs Carbon dioxide and other particulates, allowing enriched Oxygen to pass through unaffected. The Oxygen from the scrubber is then pumped back into the inhalation pipe of the patient’s face mask, thereby increasing the flow rate of Oxygen to the patient, and reducing the use of the gas from the cylinder.

The air flow in the ORS is maintained by a medical-grade pump fitted before the Carbon dioxide scrubber, which ensures a positive flow, facilitating comfortable breathing by the patient. Digital flow meters monitor the flow rate of Oxygen, and the ORS also incorporates inline Oxygen and Carbon dioxide sensors with automatic cut-offs, which stop the ORS in case Oxygen levels drop below the normal limits, or the Carbon dioxide percentage exceeds normal limits. However, this cut-off does not affect the normal in-flow of Oxygen from the cylinder, thereby allowing the patient to continue breathing easily, even if the ORS stops due to the cut-offs or for any other reason.

The first fully operational prototype of the ORS was produced on April 22, and underwent a series of in-house trials and design improvements at the Southern Naval Command, with third-party observers from ISO certified firms. Thereafter, on the directives of NITI Aayog, the system underwent detailed analysis and assessment by a team of specialists at Sree Chitra Tirunal Institute for Medical Sciences and Technology (SCTIMST) at Thiruvananthapuram. The team of specialists at SCTIMST found the concept and design of the oxygen recycling system feasible, and also suggested a few additional modifications.

An 'initial evaluation certificate’ was accorded to the ORS on May 18 by the director, SCTIMST. The system is now being progressed for clinical trials in accordance with existing guidelines, which are expected to be completed soon, after which the design will be freely available for mass production in the country. All components used in the ORS are indigenous and freely available in the country.

The overall cost of the ORS prototype has been capped at Rs. 10,000, against an envisaged saving of Rs 3,000 per day due to the recycling of Oxygen. Besides substantially enhancing the existing Oxyegn capacity in the country, the ORS can also be used to extend the life of Oxygen cylinders used by mountaineers and soldiers at high altitudes, for humanitarian assistance and disaster relief (HADR) operations and onboard naval ships and submarines.

The ORS has been designed by Lieutenant Commander Mayank Sharma of the Diving School. The system's design has been patented, and an application to this effect has been filed by the Indian Navy on May 13.