Stalin expected to take oath on May 7; Udhayanidhi unlikely in 'younger' cabinet 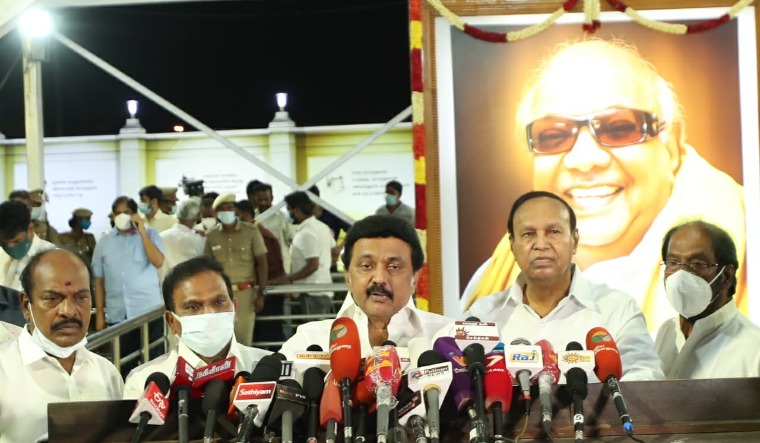 Following the DMK-led alliance’s convincing victory in the Tamil Nadu Assembly elections, party chief M.K. Stalin will take oath as the next chief minister on May 7, DMK sources said. The sources emphasised Stalin would be sworn in in a ‘low profile’ ceremony, given the COVID-19 situation. Stalin had asked supporters to avoid celebrations on Sunday, given the pandemic situation.

Stalin had told reporters on Sunday night, that the ceremony, likely in Raj Bhavan, would be simple.

DMK sources indicated Stalin’s proposed cabinet would have more younger faces, unlike the governments headed by his father M. Karunanidhi. However, Stalin’s son, Udhayanidhi Stalin, is unlikely to be part of the cabinet soon. Udhayanidhi Stalin, who made his poll debut in the recent election, won from Chepauk constituency. The DMK sources said Udhayanidhi could be ‘minister in waiting’ for at least an year.

As of Monday morning, Election Commission data showed the DMK alliance had won or was leading in 159 seats, while the AIADMK’s alliance was ahead in 75.

(With inputs from Lakshmi Subramanian)