Kerala goes to polls on April 6 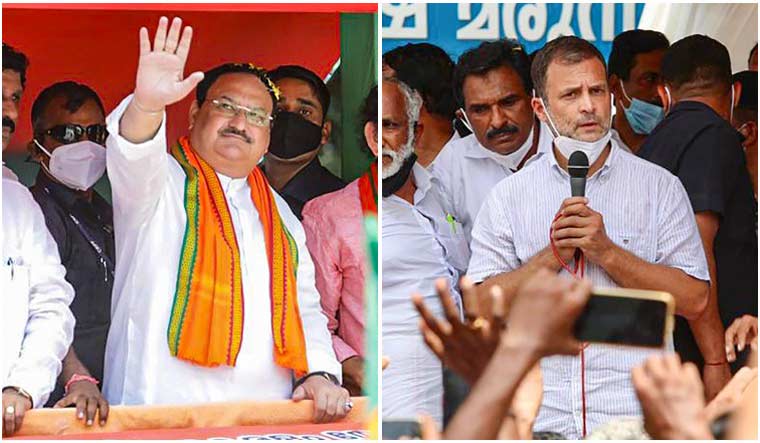 The Congress and the BJP seem to be in no mood to let go the issue of women's entry to Sabarimala shrine in poll-bound Kerala, as both the parties adopted different strategies to attack the ruling LDF on the issue.

While BJP national chief J.P. Nadda openly criticised the LDF government for "crushing" the sentiments of devotees in the whole of south India, Congress leader Rahul Gandhi chose to put across the message subtly, by offering prayers at a temple of Lord Ayyappa and a Muslim shrine dedicated to Vavarswami at Erumeli, an important centre connected to Sabarimala pilgrimage, while campaigning in Pathanamthitta, Kottayam and Idukki districts.

The two parties also attacked each other, with Nadda accusing the Congress of only paying "lip service" to the stir in the Sabarimala issue, while Rahul Gandhi hit out at Prime Minister Narendra Modi and the RSS, accusing them of dividing people on the lines of religion.

Nadda assured that the saffron party would safeguard the traditions of the hilltop shrine and that the political involvement in temple administration would go for ever.

Kerala had witnessed violent protests by a section of devotees and right-wing outfits after the Left government decided to implement the September 28, 2018 Supreme Court verdict, allowing women of all ages to enter the Sabarimala temple. As per temple tradition,women in the 10-50 age group are barred from trekking to the shrine of Lord Ayyappa, a celibate.

He attacked the CPI(M)-led LDF and Congress led UDF, saying they are "ideologically confused"as they were fighting each other in Kerala and were "bhai-bhai" (brothers) in West Bengal.

Taking on Rahul Gandhi, who is also in Kerala to campaign for the April 6 assembly polls, he demanded to know what he was doing in the southern state while Bengal was voting, with the commencementof the first phase of elections in the eastern state on Saturday.

Attacking the LDF, Nadda said it is known for the gold smuggling case in which he alleged that even ministers were involved, and the UDF, for the solar scam.

"The chief minister's office is involved in the gold scam. The investigation is going on. He (Vijayan) asked for the probe by the central agencies. When the investigation reached his office, they are saying the Centre is attacking the state government," he said.

The solar scam, which surfaced during the tenure of then chief minister Oommen Chandy in June 2013, pertains to involvementof some of his staff in allegedly cheating several people of crores of rupees by main accused Saritha Nair and her husband by offering solar panel solutions.

Meanwhile, speaking at an election rally organised in front of the two places of worship situated on two sides of the road at Erumeli in Kottayam district, Rahul Gandhi hailed the practice of people visiting the Vavar mosque and the Ayyappa temple at Erumeli before heading to the Sabarimala temple.

"To live happily and peacefully and protect each other's interests—this idea is the biggest gift you can give to this country today," he said.

Wearing the traditional black dress and bead-chain and smearing 'bhasmam', the holy ash, on forehead, chest and arms, Hindu pilgrims visit the mosque and offer prayers, reviving the local myth of Lord Ayyappa's friendship with Vavar, a Muslim saint, during the two-month long annual pilgrimage to Sabarimala.

Gandhi accused Modi and the RSS of dividing people on the lines of religion.

"This is the idea that is under attack in India. Our prime minister and the RSS spend their whole time and whole life trying to dig up this road (the road to religious harmony). They create hatred and anger so that people who believe in one idea fight with people who believe in the other idea," Gandhi alleged, speaking from the top of a roofless campaign vehicle.

He claimed India's inherent pluralism is under attack from the RSS-BJP which Later, addressing an election meeting at Puttady in Idukki district, Gandhi urged the people not to support an ideology "that divides the country, that spreads hatred, anger."

"Support an ideology that's affectionate, that believes in brotherhood and in bringing people together. That is why you should support the UDF and the Congress."