Sabotage cannot be ruled out; DRDO team to study site 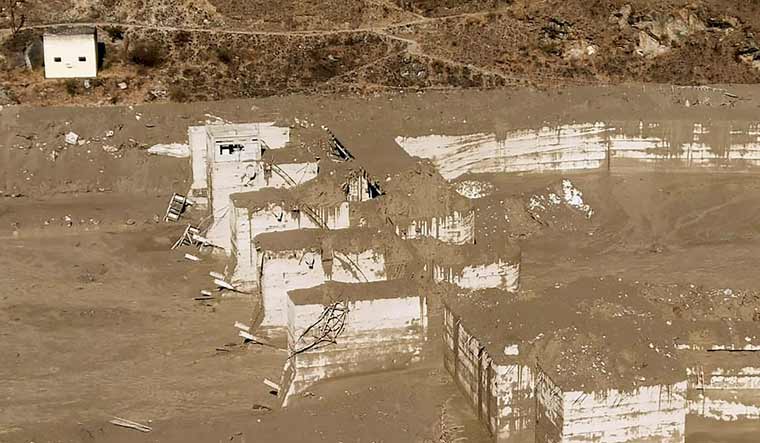 Chamoli: Damaged Dhauliganga hydropower project at Reni village, after a glacier broke off in Joshimath causing a massive flood in the Dhauli Ganga river, in Chamoli district of Uttarakhand, Sunday, Feb. 7, 2021 | PTI

A team of DRDO'S Defence Geoinformatics Research Establishment (DGRE) is heading for Joshimath to study the exact cause of the glacier burst that triggered flash floods in Uttarakhand on Sunday.

The floods, which took place after a portion of the Nanda Devi glacier broke off in the Tapovan area, near the Indo-China border, have left up to 150 feared dead and damaged multiple locations including a hydropower plant in the region. Rescue efforts are underway as many are feared trapped under the Tapovan tunnel.

But, scientists monitoring glaciers and avalanches in the region are surprised as they say glacier bursts do not take place in winters.

Defence scientists say that a glacial lake outburst flood (GLOF), a type of outburst flood that occurs when the dam containing a glacial lake fails, is a near impossibility under present climatic conditions: The area is surrounded by snow-capped mountains with temperatures of minus 20 degrees Celsius.

"During winters, glaciers are formed as snow doesn't melt due to the negative temperature. To my understanding, glacier burst in this season is next to impossible. I haven't studied such an incident in the last 50 years," said a defence scientist, who added that the exact cause can be established after studying satellite images.

Without ruling out the possibility of sabotage, defence scientists indicate that several militaries in the world use mountain resources as a weapon to hit enemy territory.

The Rishiganga hydropower project near Raini village in Uttarakhand was damaged, as was NTPC’s under-construction project on the river Dhauli Ganga near Tapovan, according to an official.

And, according to a source in the defence establishment, it could an attempt to hit the key power project—as a blast in the glacier can be triggered from a distance as well.

DRDO'S Chandigarh-based Snow and Avalanche Study Establishment (SASE) works in avalanche forecasting, artificial triggering and structural control in snowbound mountainous regions. After the recent restructuring of DRDO, it was merged with the Defence Terrain Research Laboratory in and is now called the Defence Geoinformatics Research Establishment.

A DGRE team will be moved to the accident side by IAF helicopters to study the event.