Handles of leftist figures such as Mohammed Salim, Sanjukta Basu were being withheld 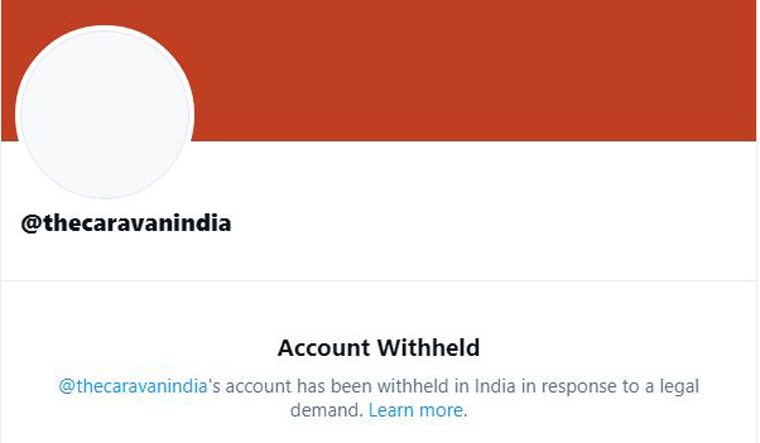 The message on the Twitter handle of The Caravan

Vinod K. Jose, the executive editor of The Caravan, a news magazine, on Monday afternoon tweeted the official handle of the publication was being withheld in India.

Opening the Twitter handle of The Caravan shows a message "Account Withheld: @thecaravanindia 's account has been withheld in India in response to a legal demand".

The Caravan has frequently carried articles critical of the Narendra Modi government, the BJP and the larger Sangh Parivar.

These include the Kisan Ekta Morcha handle—which, according to screenshots, had around 169,000 followers—and Tractor2twitr. Both these handles provided frequent updates on the farmers' agitations and also posted statements from the farmers' groups.

In addition to groups associated with the farmers' protests, Twitter handles of leftist figures such as former CPI(M) MP Mohammed Salim and activist-writer Sanjukta Basu were also being withheld.

Last month, Twitter was extensively criticised for suspending and removing accounts of thousands of rightwing users, including Donald Trump, following the riot on Capitol Hill on January 6.