The media must stem rumours about the vaccine: Yogi Adityanath 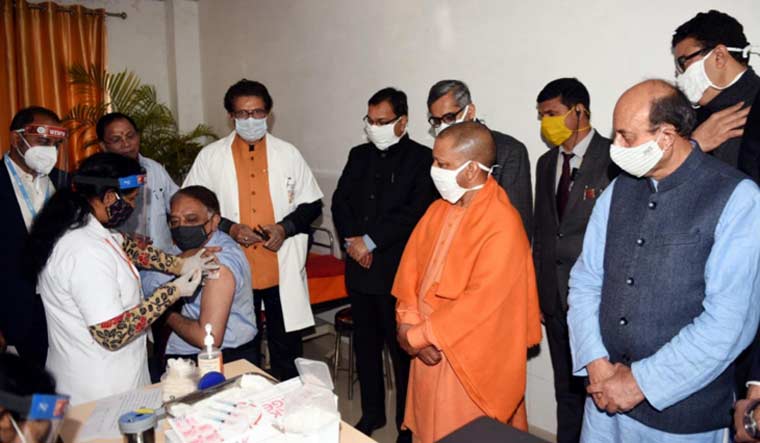 As the country rolled out the covid vaccination drive, Uttar Pradesh chief minister called upon the media to dispel misinformation about the jab. The state’s former chief minister Akhilesh Yadav, however, chose the opportunity to yet again cast doubts on the vaccine, urging people to be careful while getting it.

The CM monitored the start of the vaccination drive at Balrampur Hospital in Lucknow. “This is a new beginning. We will go in a new direction now”, he said.

He said that the state was fully prepared to administer the vaccine. “People must wait for their turn for the vaccine”, he added.

The CM has already made it clear that he will not be vaccinated out of turn but will wait for his place on the list before he takes the jab.

He said that the time had come when the coronavirus would be brought under complete control. “The efforts of the centre and the states have contributed to this success”, he said.

The chief minister also commended the media for playing a positive role during the pandemic—including highlighting laxities and gaps in the government’s efforts. “The media must stem rumours about the vaccine”, he said.

Samajwadi Party chief Yadav, who has faced flak for calling the vaccine "of the BJP" and has declared his intention not to take it, meanwhile, took to questioning the vaccine once again. He cited the example of Norway where 23 elderly people, reportedly in frail condition, have been reported dead soon after taking vaccines by Pfizer.

“A developed country which is far ahead of us has had deaths because of the vaccine”, Yadav said. “All BJP people should first get the vaccine”, he added.

Yet, he also reiterated that if his party were to come to power everyone would get a free vaccine—without clarifying which vaccine he was talking of.

Meanwhile, the SP sent out a release claiming that hundreds of disgruntled members from the BSP, the BJP and the Congress had joined the party. The photos attached to it showed a hall full of people with no social distancing being observed and hardly any masks in sight.

The state’s CM has repeatedly said that a vaccine does not mean that the basic protocols of distancing, masking and hand washing can be done away with.