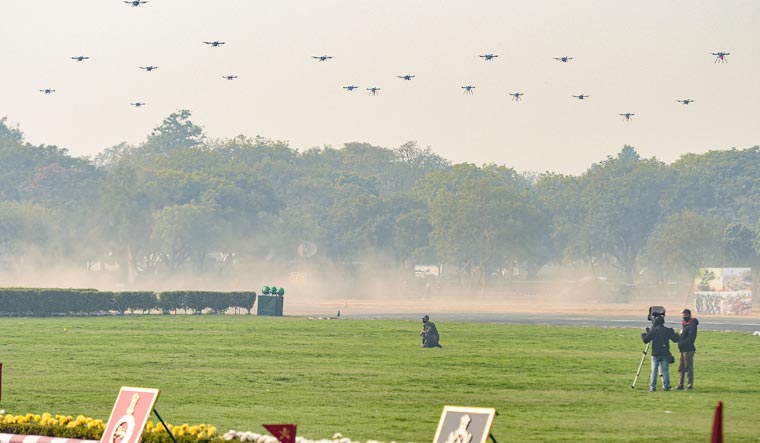 Among the many systems showcased at the Army Day parade on Friday, a display by a large number of drones created a buzz, literally.

Around 75 drones of the Indian Army carried out multiple mock operations, including kamikaze attacks, first-aid delivery and parachute payload delivery exercises, at the event.

These were more than ordinary rotary drones (that take off like helicopters)—they were part of a 'drone swarm'. A commentary in US journal War on The Rocks defined drone swarms as "multiple unmanned platforms and/or weapons deployed to accomplish a shared objective, with the platforms and/or weapons autonomously altering their behaviour based on communication with one another”.

A. Bharat Bhushan Babu, the principal spokesperson of the ministry of defence, tweeted that the demonstration of the 75-unit drone swarm was a milestone in "disruption in warfare". Babu tweeted the drone swarm could "enter 50 km inside enemy territory & carry out independent military tasks & destroy targets".

Babu added, "Each drone is autonomous and independent to carry out missions by leveraging power of AI (artificial intelligence)".

Economic Times reported the Indian Army is working with NewSpace Research and Technologies, a start-up, to develop swarm drones. The Army and NewSpace plan to fly up to 1,000 rotary drones at once. These drones can destroy targets ranging from tanks and terror camps to fuel dumps.

Why drone swarms are deadly

Drones capable of destroying targets—using either missiles or by going Kamikaze (detonating themselves)—have existed for at least two decades. But where drone swarms differ is their capability to 'saturate' radars and air defences, complicating an enemy's capability to respond. Moreover, the relatively small size of the drones and their simple construction make them cheaper to build and customise.

US defence website The Drive noted in 2018, "Future swarms of small drones might also be able to carry electronic warfare jammers, emitters that mimic the signals of larger aircraft, equipment capable of conducting cyber attacks, or other systems to confuse or overwhelm an opponent’s defences ahead of or during a more complex operation."

Drone swarms have already seen combat. In January 2018, two Russian bases in Syria—Hmeimim air base and a naval facility in Tartus—were attacked by drone swarms, launched by Islamist rebels.

In September 2019, Yemeni Houthi rebels used drone swarms and cruise missiles to target two major oil facilities in Saudi Arabia. The facilities in Saudi Arabia were defended by US and European surface-to-air missiles and anti-aircraft guns. The failure to detect and defeat the attack was attributed to the fact that the Saudi military was focussed on countering high-flying threats rather than low-flying cruise missiles and drones.