Swarm threat: Why China's use of drones for food delivery is no laughing matter

In June 2017, Chinese researchers conducted tests with a swarm of 117 drones 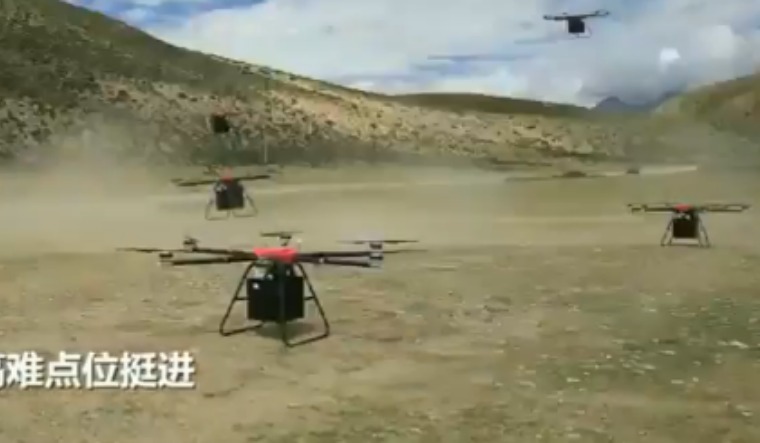 On Friday, Chinese state media, arguably, replaced its 'war-like' approach on reporting about the country’s military capabilities on the border with India.

Instead of showing artillery, rocket launchers or bombers on exercise in Tibet as it had done in the past four months, Chinese state media outlets showed something 'innocuous' and innovative: Delivery of food to troops by drones.

Global Times reported "PLA logistics soldiers were seen transporting hot food with ground vehicles. In locations where the road was blocked, however, they packed the food, water and medicine, before putting them into several unmanned aerial vehicles (UAVs) that automatically delivered the ‘care packages’ to front-line soldiers."

Global Times and other Chinese outlets showed a number of small 'quadcopter' drones, which take off and land vertically, carry containers of food that were dropped from a low height and handed over to soldiers. Not surprisingly, many on social media were amused by the sight of the drone delivery.

But, was the whole exercise just as innocuous' as it was portrayed to be? For starters, it testifies to the progress China has made in development of drones of all sizes and all shapes. In fact, China has become a major supplier of large armed UAVs, with Pakistan becoming a notable client. But one drone threat that, literally, slips off the radar is that of the 'drone swarm', a field in which China has undertaken considerable research.

A commentary in US journal War on The Rocks defined drone swarms as "multiple unmanned platforms and/or weapons deployed to accomplish a shared objective, with the platforms and/or weapons autonomously altering their behaviour based on communication with one another.” It noted the capability of drones to communicate with one another differentiates a drone swarm from a group of individual UAVs.

In fact, on Thursday, Global Times reported that China had tested a "combat system" that integrates drone swarms with armoured vehicles. The screengrab of the report showed drones similar in layout to the UAVs used to deliver food to soldiers in Tibet.

In June 2017, Chinese researchers conducted tests with a swarm of 117 drones. In May 2018, a Chinese company flew 1,374 quadcopter drones over Xian for 13 minutes, which was billed as a world record.

Most of the drone swarms exhibited by China till date have been small craft that have limited range and endurance.

However, their potential for military use is significant. In addition to traditional roles of surveillance, drone swarms could be used to attack troops or overwhelm air defence systems and render airfields or strategic targets vulnerable to attack.

US defence website The Drive noted in 2018, "Future swarms of small drones might also be able to carry electronic warfare jammers, emitters that mimic the signals of larger aircraft, equipment capable of conducting cyber attacks, or other systems to confuse or overwhelm an opponent’s defences ahead of or during a more complex operation."

Drone swarms have already seen combat. In January 2018, two Russian bases in Syria—Hmeimim air base and a naval facility in Tartus—were attacked by drone swarms, launched by Islamist rebels.