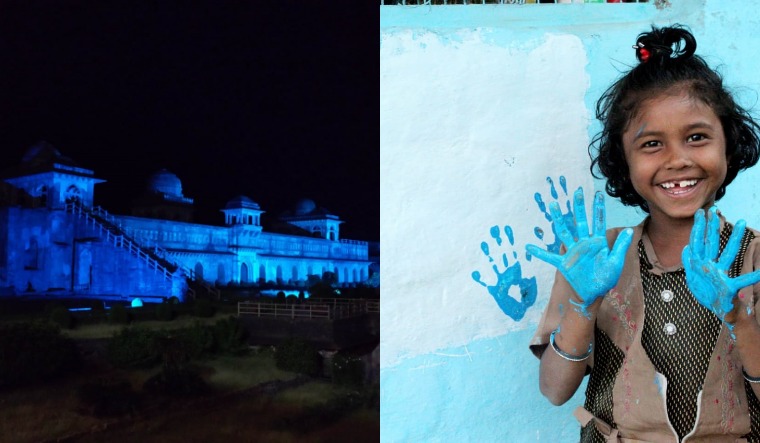 They have painted the state blue, literally. From the iconic Jahaz Mahal in historic Mandu town to parts of the Gwalior Fort and from the district hospital in Dhar to little-known tribal villages in the same district, blue has become the colour to be in many parts of Madhya Pradesh.

The initiative of illuminating the monuments and landmarks/government buildings of the state in blue lights and additionally painting the houses in tribal villages in Dhar and Jhabua districts in blue colour are part of the ‘Go Blue’ campaign of the UNICEF, the UN agency that supports children. 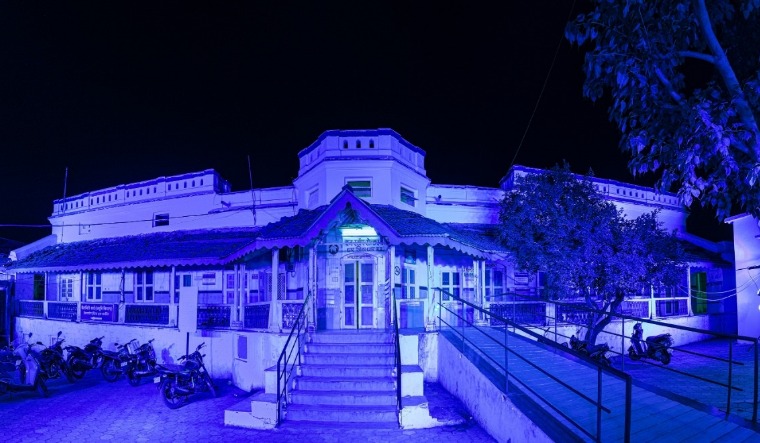 The district hospital in Dhar | Supplied

The global campaign aims at raising awareness on children’s issues—like health, safety, education and nutrition—ahead of the World Children’s Day on November 20.

‘Go Blue’ is an overreaching theme of the UNICEF for the Children’s Day, but this year, the specific themes are on climate change and impact of COVID-19 pandemic on the children, the UNICEF has said.

In Madhya Pradesh, one of the major supporters for the initiative was the MP Tourism Development Corporation as it decided to illuminate all its 68 properties (hotels, lodges and others) across the state in blue colour to support children’s issues.

“The UNICEF approached us with the idea and we were only too happy to go with it to support the children and their issues,” Sheo Shekhar Shukla, principal secretary of tourism department of MP and managing director of MP Tourism Development Board, told THE WEEK.

The Archaeological Survey of India (ASI), Bhopal Circle, decided to light up monuments like Jahaz Mahal and Gwalior Fort for the campaign. The deputy superintendent archaeologist of ASI, Bhopal, Piyush Bhatt said that they found the idea to illuminate monuments in blue to support children’s causes quite appealing and decided to go for it. “There are some technical issues, but we are also trying to light up the world heritage Sanchi Stupa in Raisen district in blue for the occasion,” Bhatt said

Meanwhile, the Bhopal Municipal Corporation will illuminate the Bhopal Gate, Raja Bhoj Setu and Lake Road in blue as part of their commitment to the cause.

A more interesting form of support to the initiative has come from the ground, as a village each in Dhar (Kanedipura in Nalchha block) and Jhabua (Gopalpura in Meghnagar block) have decided to ‘Go Blue’ too.

The community members, especially children, painted the houses in the villages with blue paint and decorated the newly painted walls using different designs as well as slogans on new-born care, immunisation, saying no to child marriage and climate change.

The historic building of the district hospital of Dhar was also illuminated for the occasion. District collector of Dhar Alok Singh told THE WEEK that issues like child safety, health, nutrition, education and medical care were very important and making people as well as government officials and medical personnel aware about the issue was equally important.

“The idea of illuminating the landmarks (Mandu is in Dhar district too) and village homes is our way to spread awareness and attract attention on children’s issues at all levels. This illumination after Diwali will certainly make people think and raise questions and then we can talk to them in detail about the issues,” the collector said.

He added that while painting the village houses in blue is a temporary initiative as of now, it can also be made a permanent thing as such actions create unity and commitment among people.

UNICEF communication specialist Anil Gulati said that the campaign is aimed at spreading information on key issues of child rights and climate change and overall advocacy for child rights.