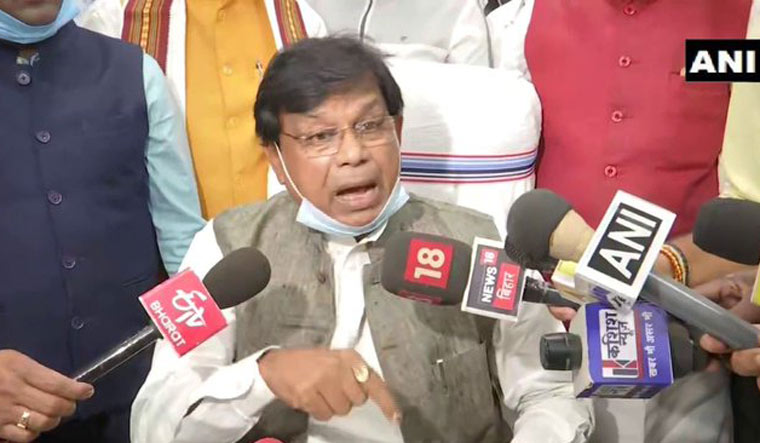 The fourth straight term of Nitish Kumar as Bihar chief minister has started off on the wrong foot with one of his cabinet colleagues resigning over corruption allegations barely three days after taking oath.

Education Minister Mewa Lal Chaudhary tendered his resignation after a meeting with Kumar on Thursday. Governor Phagu Chauhan accepted his resignation on the recommendation of the chief minister. A statement issued by Raj Bhavan said building construction minister Ashok Chaudhary, also of the JD(U), has been given additional charge of the education ministry.

Chaudhary, who belongs to Kumar's JD(U), had been named an accused in a five-year-old case relating to alleged irregularities in appointment of teachers and technicians at Bihar Agricultural University, Bhagalpur, where he was the vice chancellor.

Chaudhary's induction into the cabinet had sparked off a controversy with opposition RJD and its allies attacking the chief minister and demanding that he be sacked. RJD leader Tejashwi Yadav said Choudhary faces serious charges under the Indian Penal Code including cheating and dishonestly (section 420), and criminal conspiracy (120B).

Interestingly, Chaudhary had been suspended from his party in 2017 after an FIR was registered against him in connection with the case. The probe has brought to light alleged irregularities in the appointment of 161 assistant professors and junior scientists in 2012.

The BJP which was in the opposition during the Grand Alliance government then had strongly raised the issue against Choudhary.

Chaudhary had left the job to contest the 2015 Bihar polls on a JD(U) ticket and was elected from Tarapur Assembly seat in Munger district. He retained his seat in the just-concluded state polls and has been made the education minister.

Chaudhary's resignation has come as a major setback to the BJP-NDA coalition which had taken corruption as a key poll plank and targetted the RJD over the graft allegations against the government of Lalu Prasad Yadav.

A 14-member council of ministers was sworn in by the governor on Monday and the BJP bagged seven berths. Five ministers were from the JD(U) while one each was from two smaller allies—the Hindustani Awam Morcha and the Vikassheel Insaan Party.