This is the first phase of the 'non-contact, at sea only' exercise 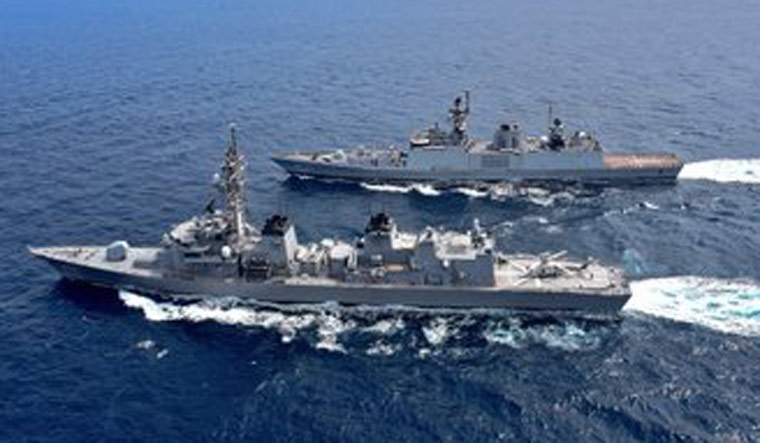 Naval ships, aircraft and personnel from India, United States, Australia and Japan began Malabar Naval Exercise 2020 in the Bay of Bengal from Tuesday. This is the first phase of the 'non-contact, at sea only' exercise due to COVID-19 safety measures. The second phase is scheduled to be conducted in the Arabian Sea in mid-November.

Equipped with the Brahmos missile, guided missile destroyers Ranvijay is one of the most heavily armed warships of the Indian Navy. INS Shivalik, first stealth frigates built in India, is equipped with a mix of Russian, Indian and Western weapon systems. These include Oto-Breda naval gun, Klub and BrahMos supersonic anti-ship missiles, Shtil-1 anti-aircraft missiles, anti-submarine rocket launchers and torpedo launchers.

Off-shore patrol vessel Sukanya is lightly armed since its primarily role off-shore patrol of India's exclusive economic zone. However, they are capable of being heavily armed and upgraded to light frigates, should the need arise.

Fleet Support Ship INS Shakti is a fleet tanker, while INS Sindhuraj is a Sindhughosh-class diesel-electric submarine of the Indian Navy.

USS John S. McCain is an Arleigh Burke-class destroyer of the United States Navy. It is part of the Destroyer Squadron 15 within the Seventh Fleet of US Navy, and has her home port at the Yokosuka Naval Base in Yokosuka, Japan. The guided-missile destroyer is designed to launch anti-aircraft guided missiles, and has over 90 missiles in addition to the guns in its weaponry. A guided-missile destroyer is usually equipped with two large missile magazines, usually in vertical-launch cells.

The destroyer was involved in a collision with the tanker ship in August 2017 off the coast of Singapore, in which ten of her crew were dead and five injured. The ship underwent more than two years of repairs before becoming mission-ready in June.

As per a statement by the US Navy said Malabar provides an opportunity for like-minded navies who share a common vision of a more stable, open, and prosperous Indo-Pacific, to operate and train alongside one another. “A collaborative approach toward regional security and stability is important now more than ever, to deter all who challenge a free and open Indo-Pacific," Cmdr. Ryan T. Easterday, commanding officer, USS John S. McCain, said in the statement.

Naval officers maintained that embarkation of a helicopter also provides the ship with the capability to deliver air-launched missiles and torpedoes. Commanding Officer of HMAS Ballarat, Commander Antony Pisani, said the multinational maritime exercise was an opportunity to build interoperability with key regional partners, India, Japan and the United States.

Japan Maritime Self Defence Force (JMSDF) Onami Destroyer participated in the Malabar 2007 together with the destroyer Yudachi. On June 2012, Ōnami participated in JIMEX 12, the first naval exercise between the JMSDF and the Indian Navy, held in Sagami Bay, which commemorated 60 years of diplomatic relations between India and Japan. Its armament includes a wide range of missiles, anti- ship rockets and torpedoes. It has flight deck and hangar for 1 helicopter / SH-60J(K) Seahawk.

Cmdr. Ishidera Takahikoo, commanding officer, JS Onami says, "We, the JMSDF, have been striving to strengthen partnership among the navies of friendly nations through maritime exercises such as Malabar to achieve a Free and Open Indo-Pacific.”

Naval war games gain significance amidst growing aggression by the Chinese military in the region. Indian Army and Chinese People's Liberation Army is engaged in a standoff in Eastern Ladakh for over five months and multiple rounds of military and diplomatic negotiations have failed to defuse the tension on the Himalayan frontiers.