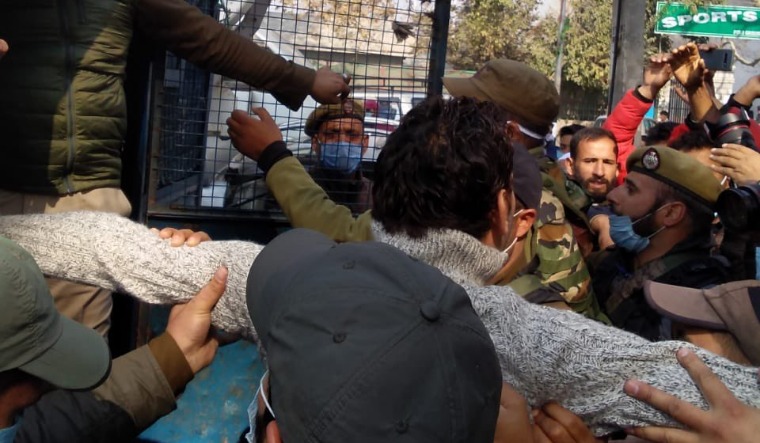 A PDP activist being detained | Twitter handle of Mohsin Qayoom

Several leaders of the Peoples Democratic Party (PDP) on Thursday were detained by police after they tried to stage a protest against the new land laws announced by the Centre that paved the way for any Indian citizen to buy land in Jammu and Kashmir. The new laws have come into effect immediately and were announced more than a year after the revocation of Article 370 on August 5, 2019.

The police swung into action after PDP leaders, including party spokesman Suhail Bukhari, assembled at the party headquarters at MA Road in Srinagar to march to Press Enclave. Bukhari Khursheed Alam, Rouf Bhat, Waheed Parra, Mohit Bhan and others shouted slogans against the new land laws when the police prevented them from marching to Press Enclave and whisked them away in police vehicles. The party staged a similar protest on Wednesday in Jammu against the new land laws.

In a series of tweets, PDP president Mehbooba Mufti condemned the arrests and said the party office has been sealed and workers detained by the police for staging a peaceful protest.

“PDP office in Srinagar sealed by J&K admin & workers arrested for organising a peaceful protest. A similar protest was allowed in Jammu so why was it thwarted here? Is this your definition of ‘normalcy’ that’s being showcased in the world?” Mufti tweeted.

“PDP’s @parawahid, Khurshid Alam, Rouf Bhat, @MohsinQayoom_& @buttkout were arrested by J&K police for protesting against the settler colonial land laws thrusted upon people of J&K. We will continue to raise our voice collectively & wont tolerate attempts to change demographics.”

The new laws have sparked fears in Jammu and Kashmir about demographic change in the Union territory.

The laws have come in for criticism in Jammu also. Panthers Party chief Bhim Singh on Wednesday said he will challenge the new laws in the Supreme Court and, if needed, move to the International Court of Justice (ICJ) if the apex court didn’t overrule the new laws.

The news laws were announced by the Centre on October 27 by repealing and amending more than 11 laws that were in vogue when Jammu and Kashmir was a state.

The new laws also empower an Army commander, no less than the rank of corps commander, to declare any area as strategic for use by the Army for training and operations.

Thursday’s protest is the first reaction by the political parties in Kashmir against the new laws. The separatist Hurriyat Conference, led by Mirwaiz Umar Farooq, has also condemned the laws and called for a strike on October 31 against attempts to change the demography of Kashmir.