In Bihar polls, trials by fire for an array of political dynasts

The first phase of the elections will commence on October 28 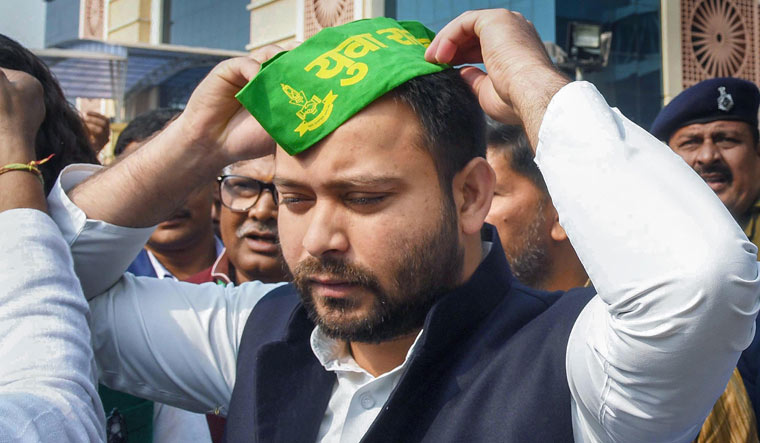 Even though the spotlight has been stolen by LJP chief Chirag Paswan and RJD's Tejashwi Yadav—both of whom hogged the headlines in the run-up to the polls—there are a lot of high-profile battles featuring political dynasts.

In the cauldron of caste alliances and political brinkmanship, how will they fare? Here is a look at some of the most prominent match-ups, featuring political scions.

Chirag Paswan: It is literally a do-or-die election for the sitting Lok Sabha MP from Jamui, who decided to brave his own path through the political wilderness amid the death of his father Ram Vilas Paswan—the most prominent dalit leader in Bihar. He turned completely against NDA ally JD(U), traded barbs with Chief Minister Nitish Kumar and announced that a coalition of the LJP and the BJP would come to power post-polls. At the same time, he openly stated his loyalty to the BJP and called himself PM Narendra Modi's 'Hanuman'. By contesting in over 140 seats, a majority of them in direct competition against the JD(U), Chirag's plan will be to cut into Nitish Kumar's votes and emerge a kingmaker in case the NDA falls short of majority. However, the BJP has literally disowned Chirag—top leaders including Union ministers called him a 'vote eater' and accusing him of creating confusion in the minds of the electorate by claiming close proximity to senior BJP leadership, including Prime Minister Narendra Modi. He is now virtually friendless in the thick of the jungle, but there have been sympathetic noises from RJ(D)'s Tejashwi Yadav, and further developments leading to a possible political realignment cannot be discounted for. Even after Ram Vilas Paswan’s death, LJP and Chirag will still have a huge draw among the over 14 per cent dalits in the state, especially the close-knit Paswan community.

Tejashwi Yadav: The Yadav scion will contest in high-profile Raghopur, and this fight will be watched closely for more reasons than one. Tejashwi is now the chief ministerial candidate for the opposition grand alliance, and he is contesting in a Yadav-dominated seat which Lalu Prasad represented in the assembly twice since 1995. Tejashwi won the seat in his maiden electoral politics outing in 2015, but now he will have to face rival Satish Kumar of the BJP, who had emerged as giant killer after defeating his mother Rabri Devi from the same seat in the 2010 polls. Satish Kumar had lost to Tejashwi last time. But, at that time BJP was fighting alone and Tejashwi was a nominee of the grand alliance which then comprised of RJD, JD(U) and the Congress. In this seat, the Rajputs, who usually vote BJP could be the deciding factor. Chirag’s LJP has fielded a Rajput, Rakesh Roshan, in the seat, which could hurt the hopes of the BJP and draw votes away from it.

Tej Pratap Yadav: Tejashwi's elder brother Tej Pratap, a sitting MLA from Mahua, has shifted to Hasanpur in Samastipur district. In this massively Yadav-dominated seat, the older scion will face Janata Dal (United) sitting MLA Raj Kumar Ray. When questioned as to why he left Mahua, Tej Pratap told The Quint: “This is Lalu’s bastion. Lalu [Prasad Yadav] loves this place and for many days, there hasn’t been any development here. So, I thought I will work and try to give employment to the youth here.” In all fairness, both Yadav siblings have no choice but to succeed in these elections at the risk of a huge political embarrassment for their father, and Hasanpur is the closest to what a sure shot can be for Tej Pratap.

Shreyasi Singh: The daughter of former Union minister Digvijay Singh, and the Commonwealth Games shooting champion in 2018, the 29-year-old who joined the BJP early this month has her work cut out in the constituency of Jamui. Her opponent is a strongman in RJD's Vijay Prakash, and she has to negotiate a complex caste matrix. Rajputs and Yadavs are almost equal in numbers in the constituency. While Shreyasi is a Rajput, her opponent is a Yadav. Her father Digvijay Singh is is held in high esteem by the Rajputs of the area. A former confidante of Nitish Kumar and George Fernandes, Singh had parted ways with the chief minister in 2009 when he fought the Lok Sabha polls as an independent from Nitish’s pocket borough Banka and pulled off a stunning victory. He died a year later and his wife Putul Kumari won the seat as an independent in the ensuing by-election.

The constituency also has a significant population of Muslims and dalits—including Paswans, the support base of the LJP. Dalit mushars (literally translates as rat-eaters) could also vote for her as their leader Jitan Ram Manjhi is a partner in the NDA. In this case, Chirag Paswan's support has come as a major boost for Shreyasi. Chirag has not fielded his nominee on the seat and has expressed good wishes to his "younger sister" and appealed to the party workers to support her.

Luv Sinha: Actor-politician Shatrughan Sinha's son Luv Sinha is in the fray from Patna's Bankipur on a Congress ticket. Bankipur is a part of the Patna Sahib Lok Sabha constituency and is considered a BJP stronghold. The parliamentary seat had twice elected Shatrughan in 2009 and 2014, but as a BJP member. In the 2019 elections, Shatrughan, 74, contested as a Congress candidate and lost the seat to BJP's Ravi Shankar Prasad. Luv said he was not there to avenge his father's defeat, but to fight an "uphill battle" on his political debut by challenging the BJP in its bastion in order to prove his mettle. At the same time, however, Luv said he feels there is an anti-incumbency factor against the sitting MLA Nitin Nabin, alleging that the BJP candidate had got the seat as an inheritance from his father was also an MLA from Bankipur. Dismissing speculation that he too got a ticket due to his father, Luv said if it was about nepotism, he would have chosen the Lok Sabha polls instead of the assembly elections.

Subhashini Raj: Daughter of former Union minister Sharad Yadav, one of the most prominent JP movement socialist graduates, Subhashini will contest on a Congress ticket from Bihariganj seat. She told The Hindu that the 2017 break of the mahagathbandhan, with the JD(U) reverting to the NDA and dumping the RJD, was a betrayal of the mandate of 2015. “It is among the people and in public service that we can take forward these ideas,” she said.