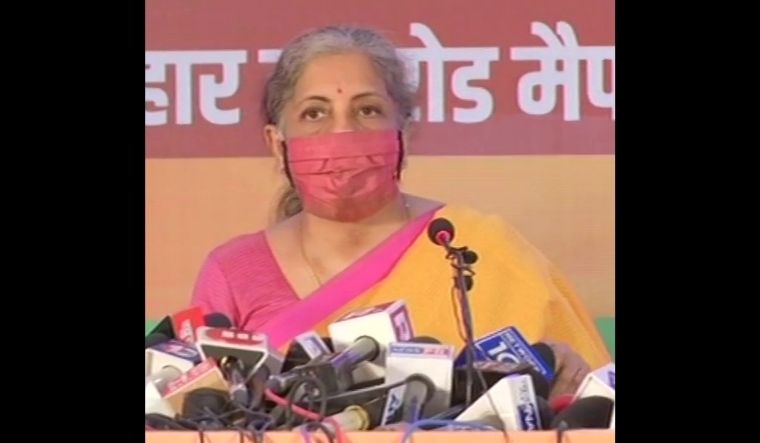 The ruling BJP on Thursday promised free coronavirus vaccination for all in Bihar as it released its manifesto for the state ahead of the assembly elections starting next week. "As soon as COVID-19 vaccine will be available for production at a mass scale, every person in Bihar will get free vaccination. This is the first promise mentioned in our poll manifesto," Union Finance Minister Nirmala Sitharaman said, releasing the manifesto on Thursday.

However, the saffron party's promise of free of cost vaccination against the coronavirus is now being criticised in unison by various political parties and social media users. Many, including the Congress and the AAP, have criticised Sitharaman's poll promise saying the BJP government is politicising a necessity like COVID vaccination at the time of a pandemic.

"Is the FM suggesting that citizens from other states will have to pay for the vaccine? Is the BJP government going to make Indian citizens pay to save their lives? Every major vaccination programme from polio to smallpox has been free for our citizens, does BJP intend to reverse that?" asked Congress. “In the migrant workers crisis, Bihar CM and Deputy CM said they won't let Biharis enter. The PM said vaccines can't possibly be made before a year. 1000 Biharis died due to COVID. Do the central ministers care? They're deriding Biharis,” said Congress’s Randeep Surjewala on BJP's vaccine poll promise.

"What about non-BJP ruled states? Indians who didn't vote BJP will not get a free Covid vaccine?" questioned Aam Aadmi Party.

Congress party leader and Lok Sabha MP Shashi Tharoor wondered if the Election Commission was taking note of such promises. "You give me vote, I'll give you vaccine. What appalling cynicism! Will the ElectionCommission rap her and her shameless government on the knuckles?" Tharoor tweeted.

Not just the opposition, but social media users, too, criticised the manifesto promise.

So only people in States going for elections will be blessed with #COVID19 vaccine whenever it comes.
The rest of States in #India need to wait for elections to come & for Politicians to show meharbaani. Of course, in return they will be expected to vote for these politicians. https://t.co/APxCBfbTb7

First the Covid vaccine will reach citizens of Bihar, then some places in Madhya Pradesh. After that it will go to West Bengal, Assam and Tamil Nadu. And then it will come to Uttar Pradesh.#BiharElections2020 #bjpmanifesto https://t.co/05tFTG4BAB

Classic case of desperation & uncouth public administration. Who does she even think she is? https://t.co/Aq7RLGThD9

Apart from the vaccination promise, other key highlights of the BJP manifesto include a promise of 19 lakh jobs in the next five years, assurance of bringing lentils under the MSP regime and recruitment of three lakh teachers in primary, secondary and higher educational institutions.

The manifesto also said a large number of people will be provided employment in the health sector which is in for a major facelift through projects like the AIIMS at Darbhanga. Other attractive promises include self-reliance for one crore women through micro finance, pucca houses for 30 lakh people, and a boost to fisheries making Bihar number one in the sector.

It also promised a fresh impetus to the dairy sector with the setting up of 15 milk processing units.