Bypolls to be held in two constituencies on Nov 3; counting is on Nov 10 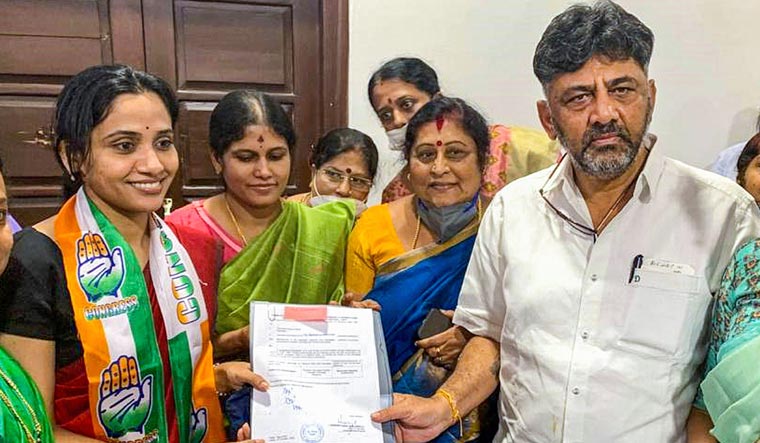 Karnataka is bracing for two crucial bypolls—Sira (Tumkur) and Rajarajeshwari Nagar (Bengaluru)—on November 3. The bypolls promise to be a triangular fight between the two national parties and a regional party.

The BJP on Tuesday announced its candidates for the bypolls which will be fought in the Old Mysuru region, a strong bastion of the Congress and the JD(S). The saffron party has chosen Dr C.M. Rajesh Gowda, son of former Congress MP from Chitradurga C.P. Mudalagiriyappa, to contest the Sira bypolls.

The bypoll in Sira was necessitated by the demise of JD(S) MLA B. Satyanarayana in August. Gowda, a radiologist who joined the BJP recently, will be fighting Congress veteran and former minister T. B. Jayachandra and widow of late Satyanarayana, Ammajamma.

Interestingly, Gowda is the founder-director of Matrix Imaging Solutions, a diagnostic lab where former chief minister Siddaramaiah's MLA son Dr Yathindra was one of the directors. But Yathindra was forced to step down as director in 2016, after the BJP objected to the company bagging the government (hospital) tender during the Siddaramaiah government.

The Congress has fielded Jayachandra, who won the Sira seat in 2008 and 2013 by defeating Sathyanarayana, who in turn snatched the seat in 2018. The JD(S) is hoping to cash in on the voter sympathy by fielding the deceased MLA's wife, who is currently undergoing treatment for COVID-19. 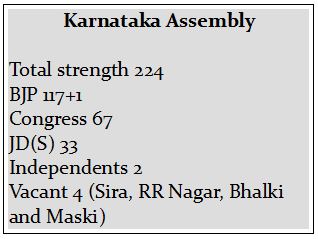 In Rajarajeshwari Nagar, the BJP is fielding R. Munirathna, who held the seat previously. The bypoll was necessitated after Munirathna was disqualified under the anti-defection law by then speaker Ramesh Kumar.

Munirathna, who started his political stint as a municipal corporator from Yeshvantpur, is a well-known Kannada film producer and a two-time Congress legislator from the RR Nagar. He was among the 14 rebel Congress MLAs who toppled the JD(S)-Congress coalition paving the way for installing the BJP government in July last year.

After his disqualification, he joined the BJP hoping to get re-elected in the bypolls held on December 5 last year. But the bypolls to his constituency was put on hold as a case of electoral malpractice (fake voter identity cards) was pending before the Karnataka High Court. The case was filed by defeated BJP candidate Tulasi Muniraju Gowda soon after the 2018 assembly polls. The case that eventually landed in the Supreme Court was dismissed by the apex court on Tuesday, clearing the path for Munirathna's contest.

Meanwhile, the Congress has handpicked Kusuma H. (31), the wife of late IAS officer D.K. Ravi who had died in 2015. The Congress government had been blamed for the death of the upright officer. Kusuma, an engineering graduate with a masters from the University of Massachusetts, US, is the daughter of former JD(S) leader Hanumantharayappa, a popular Vokkaliga face in RR Nagar, who joined the Congress this month to contest the bypolls.

JD(S) is fielding Krishnamurthy, a party loyalist. The party is keen on winning RR Nagar with sizeable Vokkaliga votes and is desperate to retain the Sira seat for its own political survival as the party, which won 37 seats in the 2018 polls, drew a blank in the December 2019 bypolls. It now holds only 33 seats in the 224-member Assembly.

The Congress party, which is currently headed by another strong Vokkaliga leader D.K. Shivakumar, wants to retain the RR Nagar seat at any cost as it would strengthen its position in the city and dislodging its arch rival JD(S) from the Vokkaliga heartland would be politically rewarding for both Shivakumar and the party.

For the BJP, which has been steadily making inroads into the Old Mysuru region, cannot afford to lose the two seats as the ruling party surely needs to boost its image amid the pandemic gloom.

The counting of votes will be on November 10.