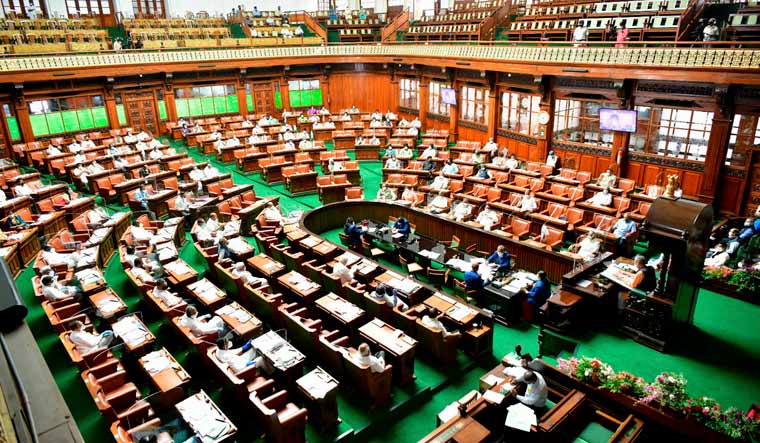 The Karnataka Assembly witnessed stormy scenes on Saturday after the Leader of the Opposition Siddaramaiah demanded an investigation by a sitting judge of the Supreme Court into the alleged bribery case involving Chief Minister B. S. Yediyurappa's family in a government housing project.

Siddaramaiah made the allegation during the debate on the no-confidence motion introduced by him. However, the motion against Yediyurappa-led government was defeated by voice vote.

Earlier, Siddaramaiah demanded an inquiry into the charges of corruption and urged the chief minister to resign to pave the way for a fair investigation. "If the charges are not proven, I will resign," said Siddaramaiah.

The ruling BJP and the Congress engaged in a war of words after Siddaramaiah named the chief minister's son repeatedly.

A furious Yediyurappa asked Siddaramaiah to prove the charges. "Why are you talking irresponsibly in the House? Have you lost your mind? Why are you dragging the names of non-members of the House? I will retire from politics even if a single charge you have made is proved. Since you have made the allegation against my family,  you have to prove it. "

Law Minister J.C. Madhuswamy reminded Siddaramaiah that the House rules barred any member from naming non-members of the House and also from making any defamatory or incriminatory charge against any individual without providing enough evidence to facilitate the probe by the minister (government).

"The evidences like audio recording of the alleged conversation and WhatsApp chats, which are part of a sting operation by a private channel, is not admissible by the court under the Evidence Act," said Madhuswamy.

Earlier Siddaramaiah said the BJP government-led by Yediyurappa had lost the people's trust owing to the "administrative failure" in the handling of the flood situation and in maintaining law and order situation.  KPCC chief and Kanakapura MLA D.K. Shivakumar raised the issue of "poor" Covid response and "discrimination" against his party MLAs in giving development funds.

Siddaramaiah alleged that the flood situation was not managed well by the BJP government. He also stated that the D.J. Halli violence was triggered due to Naveen Kumar's derogatory Facebook post on Prophet Muhammad. "The delay in registering FIR against Naveen, the failure of police to control the situation, the intelligence failure and the government's inefficiency were responsible for the ugly incident. It is not a communal incident as no one other than the MLA and his relatives were attacked. Now, why is the government invoking UAPA or handing over the probe to NIA? Does the government not trust the state police?" he asked.