Ram Temple 'bhoomi pujan' need not be deferred: UP minister

A priest and 15 cops on duty at the temple site, tested positive for COVID-19 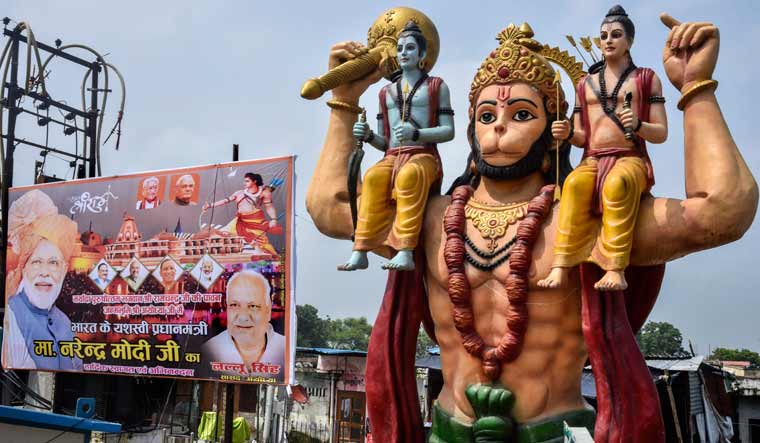 A hoarding of PM Narendra Modi and other leaders put up beside a statue of Lord Hanuman, ahead of the 'bhoomi pujan' of Ram Temple, in Ayodhya | PTI

There is no question of postponing the 'bhoomi pujan' for the construction of the Ram Temple in Ayodhya on August 5, said Uttar Pradesh cabinet minister Sidharth Nath Singh. This, after a priest and 16 policemen on duty at the temple site, tested positive for COVID-19.

"Just because 16 policemen have tested positive for COVID-19, we cannot defer a grand event of this nature. There are other policemen who will take care of the security. Likewise, the priest who has been tested positive is not the main priest, or the only priest, at the temple. There is nothing to worry. The place is being regularly sanitised. The stage is set, and the all necessary protocols will be followed on that day," said Singh to THE WEEK.

At 12.30pm, on August 5, in a hour-long programme, Prime Minister Narendra Modi, along with priests of the temple and other dignitaries, will perform the ground-breaking ceremony for the construction of the temple.

Also, the Ram Janmabhoomi Teerth Kshetra, set up for the construction and management of the Ram Temple in Ayodhya, has placed orders for around four lakh packets of Bikaneri laddoos, which will be delivered to all foreign embassies in Delhi on August 5.

Earlier, some opposition parties had opposed the live telecast of the 'bhoomi pujan' for the Ram Temple, calling it antithetical to the accepted norms of national integrity.

Asaduddin Owaisi, Lok Sabha MP and president of the All India Majlis-e-Ittehadul Muslimeen (AIMIM) said Modi’s presence at the ceremony will amount to violation of the constitutional oath taken when he had assumed office.

CPI’s general secretary D. Raja said the prime minister’s presence at the event is definitely a violation of secular principles.

Said Raja to THE WEEK, “Look at the date the government has chosen—August 5. It looks suspicious to me. This was the date when Article 370 was removed in Jammu and Kashmir last year. The Union government should be neutral towards all religions. Modi cannot identify himself with one religion in this manner. Leaders like [Atal Bihari] Vajpayee would not have approved of this. This government is working diametrically opposite to the secular politics practised and preached by their own leaders like Vajpayee.”

Faizabad MP of the BJP Lallu Singh said opposition leaders should refrain from creating controversies around the event. “The entire area around the temple is being beautified even as we speak. August 5 is an important day for all of us, and let us hope and pray that the COVID-19 crisis in the country will end soon," said Singh to THE WEEK.