It was accompanied by a social media offensive titled #SpeakUpAgainstFuelHike 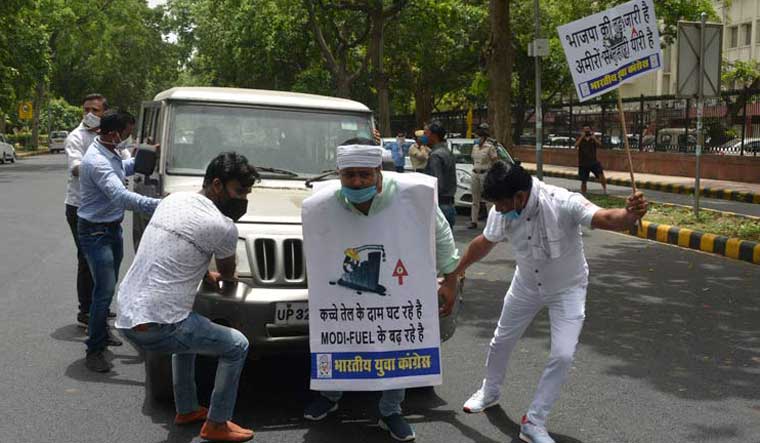 The Congress today carried out nationwide protests against the increase in prices of diesel and petrol, with party chief Sonia Gandhi and ex-party president Rahul Gandhi leading the principal opposition party's campaign against the Narendra Modi government by attacking it for engaging in “extortion from the people” and “profiteering” at a time of crisis.

The party's on-ground agitation in different parts of the country saw partymen holding sit-ins, handing of representations to local authorities to be forwarded to President Ram Nath Kovind and also taking to innovative methods of protests such as riding bicycles or taking out cycle-rickshaw rallies.

This was accompanied by a social media offensive titled #SpeakUpAgainstFuelHike, which involved party leaders and workers expressing their views on the fuel price hike. Vox populi from all over the country on the impact of the increase in prices of petrol and diesel on the common man were also aired as part of the campaign.

Taking part in the social media campaign, the Congress president said the Modi government was extorting from the people and indulging in profiteering at a time when the common man was already hit hard economically due to the COVID-19 pandemic. She said it had come as a big blow to the people who were already suffering from loss of livelihoods.

“It is the duty of the government to come to the aid of the people at a time of crisis and not make profits out of their hard-earned money,” Gandhi said.

Rahul Gandhi said in a video message aired as part of the campaign that the Modi government had directly hit the poor and the vulnerable by raising the fuel prices 22 times. “The fuel price hike will affect all of you in two different ways—one where you will know that it has hurt you directly, when you pay more from your pockets for petrol, and a second indirect manner in which it will lead to inflation,” he said.

“At a time when the crude prices are at an all-time low, the prices of petrol and diesel in India are at their highest,” he said.

AICC General Secretary Priyanka Gandhi Vadra urged people to join the Congress's campaign by airing their views on the fuel price hike and demanding from the government a roll-back of the increase in prices.

Congress leaders in various states cycled to symbolically highlight the problems faced by the people as a result of increase in prices of petrol and diesel. AICC General Secretary in charge of Organisation K.C. Venugopal and party colleagues Rajiv Satav and Manick Tagore rode cycles from their residences to Parliament and back.

Party workers took out a cycle-rickshaw rally in Varanasi, which is Modi's Lok Sabha constituency.