No intrusion into our territory, no post captured, says Modi at all-party meet

Modi denied any incursion by China, said India would uphold its sovereignty 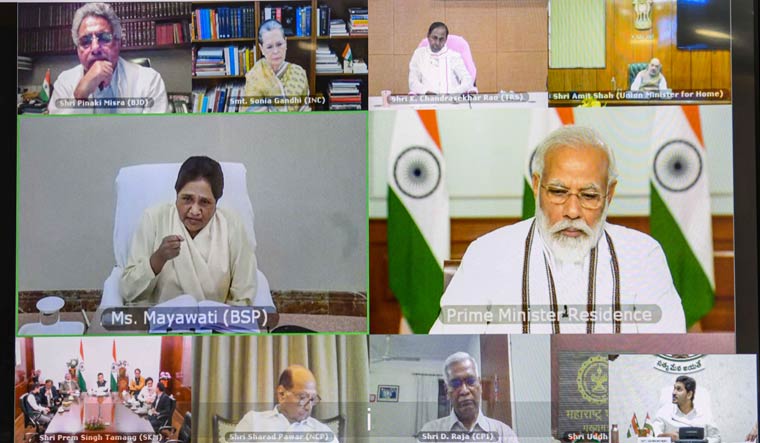 Prime Minister Narendra Modi, Home Minister Amit Shah and leaders from other political parties at the all-party videoconference held to discuss the clashes with China along the border in Ladakh | PTI

The Chinese incursion inside Indian territory and the killing of 20 Indian soldiers in Ladakh has stunned the nation. As the chorus demanding strong action—military and economic—against China grew, Prime Minister Narendra Modi called an all-party meeting to discuss the situation.

While most parties supported the government in formulating an appropriate response, the Congress questioned the government's handling of the situation and asked if the incident was an intelligence failure.

Modi told the leaders that neither was anybody inside India's territory, nor was any Indian post captured.

“Twenty of our brave soldiers made the supreme sacrifice for the nation in Ladakh but also taught a lesson to those who had dared to look towards our motherland. The nation will forever remember their valour and sacrifice,” he said.

Addressing the leaders of Opposition parties through the video conference, Modi hit out at China, saying the entire country was hurt and angry. He assured the leaders that the Indian Armed Forces were capable of answering any threat.

“Our country today has such capability that no one can even dare look towards an inch of our land. Indian forces are capable of moving together across sectors. While on the one hand, the army has been given the freedom to take necessary steps, India has also conveyed its position clearly to China through diplomatic means.”

Modi's message to the leaders was that though India wanted peace and friendship, upholding sovereignty was of foremost concern. He added that the government had been developing its border infrastructure, with provisions made for fighter planes, modern helicopters, missile defence systems and other such needs of our forces.

“Through the recently-developed infrastructure, patrolling capacity at LAC has also increased. We are now better informed about the developments at LAC and consequently are able to monitor and respond better. The movement of those which used to take place without any disruption earlier is now checked by our jawans, which at times leads to a build-up of tension. Through better infrastructure, the supply of material and essentials to jawans in the difficult terrain has become comparatively easier.”

Present at the meeting, Congress interim chief Sonia Gandhi posed several questions to the government, while from outside, Rahul Gandhi accused the Centre of being asleep when China attacked. The Congress' strategy was to question the government in the same manner with which Modi had questioned the UPA's handling of relations with India’s neighbours when they were in power.

Sonia Gandhi said the country was still in dark over most of the details of the incident, and even said that the all-party meeting had been called late, pointing out that the government had been informed about Chinese intrusions on May 5.

“We in the Congress party believe that valuable time was lost between May 5 and June 6, the date on which the Corps Commanders meeting took place. Even after the June 6 meeting, efforts should have been made to talk directly, at the political and diplomatic levels, to the leadership of China. We failed to use all avenues, and the result is the loss of 20 lives as well as dozens injured,” Gandhi said, in a strong message to the government.

The Congress posed several questions: On which date did the Chinese troops intrude? When did the government find out? Did the government not receive satellite pictures of the borders? Did our external intelligence agencies not report any unusual activity along the LAC? Did the military intelligence not alert the government about the intrusion and the massive build-up by Chinese forces? Was there a failure of intelligence?

Defence Minister Rajnath Singh, who was also part of the meeting, said that there was no intelligence failure. External Affairs Minister Dr S. Jaishankar gave an overview of agreements between India and China on border management, informed about the directions given by the Prime Minister in 2014 to give the highest priority to the development of infrastructure in border areas in the regions identified and approved by the Cabinet in 1999, and also shared details of recent developments.

As Sonia Gandhi posed several harsh questions to the government, many BJP leaders attacked the grand old party of striking a different note in the meeting when everyone should have supported the government on the crucial issue. The matter is set to escalate in the coming days as both sides are likely to continue questioning each others’ motives.

NCP supremo Sharad Pawar, who had also served as the defence minister, shared his experience of dealing with the Chinese. He recounted the peace agreement signed during his tenure, and offered his view on what China's aim was with the current incursion was.

Pawar said that the goal of the Chinese Army occupying the higher ground in Galwan Valley was to dominate the Dubruk-DBO Road on the Indian side. This road is important as it provides a landing ground and is a link to both the Karakoram Pass and the Siachen Glacier. Chinese troops can at any time decide to force the closure of this road—which would come at a heavy military cost to India.

“The People's Liberation Army (PLA) must be evacuated from occupying high ground in Galwan Valley on the Indian side. If we want PLA to evacuate from Galwan, compulsory measures are required. It would be advisable to strategise using diplomatic channels to defuse tension on the border and make China see reason,” Pawar said.

CPIM general secretary Sitaram Yechury said his party had supported the approach of the government which was articulated after the meeting between the Minister of External Affairs and the Foreign Minister of China, where it was decided to handle the situation in a responsible manner and implement disengagement, so the matter would not be escalated any further.

He reminded the government about the Kargil Review Committee chaired by K. Subrahmanyam and set up by the Vajpayee government after the Kargil war, with the goal of examining lapses and suggesting measures to modernise the Armed forces.

“Government must think similarly. India gave the world Panchsheel and pursued an independent foreign policy. This must be strictly adhered to,” he said.

The Left party demanded that the government initiate high-level talks so that steps are taken, including the clear demarcation of the LAC, to maintain peace and tranquillity on the border.

West Bengal CM Mamata Bannerjee said that her party stands strongly in solidarity with the government. Bihar Nitish Kumar said that there should be no difference amongst the leaders and parties should not allow any disunity which could be exploited by other nations. Maharashtra CM Uddhav Thackeray lauded the Prime Minister and said that the entire country is one and with the Prime Minister.

AAP and RJD were not invited to the meeting. In its statement, AAP said that though it was disappointed at not being invited, it was committed to the outcome of the meeting.