'This is not 1962': Ladakh becomes a 'BJP vs Congress' battleground

"The Chinese have walked in and taken our territory in Ladakh," said Rahul Gandhi 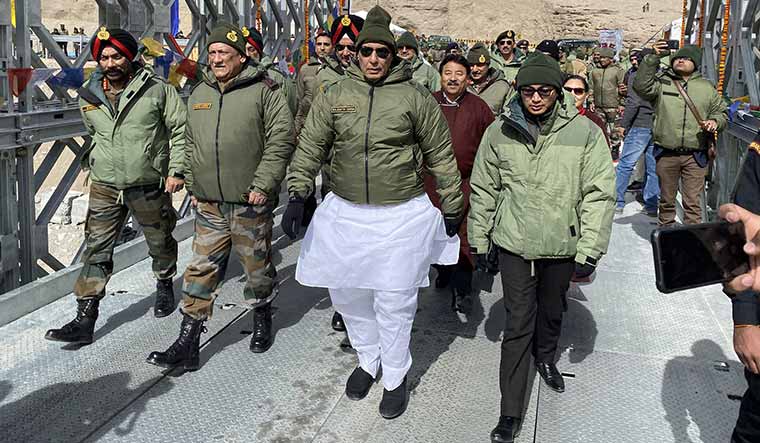 The initial heat over the Ladakh military stand-off seems to be subsiding a bit as Indian and Chinese military commanders announced that "productive" talks were held, a day after initiating a limited disengagement of troops from a number of friction points (Galwan Valley and Hot Spring) in the high-altitude arid desert. However, reports claimed that both armies are still engaged eye-to-eye in Pangong Tso, Daulat Beg Oldie and Demchok.

The trigger for the face-off was China's stiff opposition to India laying a key road in the Finger area around the Pangong Tso Lake, besides the construction of another road connecting the Darbuk-Shayok-Daulat Beg Oldie road in Galwan Valley. The road in the Finger area in Pangong Tso is considered crucial for India to carry out patrol. India has already decided not to stall any border infrastructure projects in eastern Ladakh in view of Chinese protests.

The situation in the area deteriorated after around 250 Chinese and Indian soldiers were engaged in a violent face-off on May 5 and 6. The incident in Pangong Tso was followed by a similar incident in north Sikkim on May 9.

China has also hinted at reaching a "positive consensus". Chinese foreign ministry spokesperson told reporters in Beijing that Indian and Chinese troops have started implementing the "positive consensus" reached by the senior military officials of the two countries on June 6. "Recently the diplomatic and military channels of China and India held effective communication on the situation along the border and reached positive consensus," the spokesperson, Hua Chunying, said.

At the same time, the Congress-led opposition and the Centre are locked in a political war of words over the incursions in Ladakh. Congress leader Rahul Gandhi had said that "everyone knows the situation at the Ladakh border", and repeatedly queried the defence minister on "whether China has occupied Indian territory". The BJP had hit back, saying this was not 1962 (referring to the 1962 Sino-Indian war). China had defeated India in the 1962 war. The Congress was in power then.

Rahul Gandhi on Wednesday alleged that China has taken away India's territory in Ladakh and questioned the prime minister's silence, as the opposition party stepped up its attack on the issue demanding that the government fix accountability. It accused the government of taking an "ostrich-like" approach to the issue and demanded that it tell the country what steps it intends to take to push back the Chinese army.

"The Chinese have walked in and taken our territory in Ladakh. Meanwhile, the PM is absolutely silent and has vanished from the scene," Gandhi said on Twitter. He tagged a news article claiming that China has taken a hard line during military-level talks and has claimed all of Galwan Valley and parts of Pangong Tso.

Congress spokesperson Manish Tewari said the prime minister should tell the country what he is doing to remove the Chinese from the Indian territory and who was responsible. He said patriotism and nationalism are not the exclusive monopolies of the NDA-BJP. Tewari said former Army generals and defence experts feared that around 40-60 square kilometres of Indian territory had been "illegally occupied" by China. "We would officially like to ask the NDA-BJP Government as the principle opposition party of the country, is it a fact that the Chinese have illegally occupied 40-60 square kilometers of our territory?"

"We also want to ask the prime minister about the Chinese intrusion. How did the Chinese soldiers enter India? Will the government decide its accountability? The country wants to know this," Tewari said at an online press conference.

The Congress leader said Modi should tell the country that from May 5 till now, how much of India's land had been occupied by the Chinese army. "We want to ask the prime minister what the government is doing to remove the Chinese army from the Pangong Tso Lake in Galwan Valley, where China is sitting with its soldiers and tents," he asked.

He accused the Centre of trying to push the issue into cold storage. "After the first round of military to military talks between the Indian Army and the People Liberation Army,  has there been a pull back by the PLA? If there has been a pull back, what is the extent of the pull back," he asked. Tewari also questioned whether the Chinese have withdrawn beyond the perception line, or have they withdrawn beyond what the Line of Actual Control (LAC) is according to India.

"What is the government doing to restore status quo ante as on April 1, 2020 in Galwan Valley, in Pangong Tso lake because these are extremely strategic areas,"he asked. "The names of Pangong Tso Lake, Galwan Valley, Naku La were never heard of by Indians," he said, "but today even children know about it because these are all the places where Chinese soldiers have encroached on Indian land".

BJP's Ladakh MP MP Jamyang Tsering Namgyal hit back at the Congress, saying that the Chinese did intrude into Indian territory, but it was during the Congress regime. He then listed areas that were "lost under the UPA":

3. Zorawar Fort in Demjok was destroyed by PLA in 2008 and setup PLA's Observing Point in 2012 during UPA regime and also created Chinese/new Demchok/Colony with 13 cemented houses.

The saffron party asserted that "it was no longer the India of 1962, and the country is led by a courageous leader like Prime Minister Narendra Modi, not by the Congress".

Union Minister Ravi Shankar Prasad criticised Congress leader Rahul Gandhi for raising questions about the border situation, saying he should have at least this much understanding as to not raise queries on Twitter about strategic issues involving China. He is the same leader, Prasad said in a statement, who had raised "questions" on Indian surgical and air strikes inside Pakistan, and is now raising questions over the issue involving China.

Speaking at a 'virtual rally' for Himachal Pradesh, Prasad said when India works to become self-reliant, it will also do so in matters of security, and referred to the surgical and air strikes targeting terrorists inside Pakistan during the first term of the Modi government. "We [India] want disputes to be resolved peacefully. We will say one thing very humbly that today's India is the India of 2020 and not 1962. Today's India is of a courageous leader like Narendra Modi and not of Congress leaders. This must be understood," he said, without making any direct comment on the standoff.

Taking potshots at Rahul Gandhi, the BJP leader said that how much the Congress leader understands the country's economic policy or strategic affairs is a matter of debate. Prasad asked if it is proper for Gandhi to raise such questions openly about crucial matters related to external affairs. Targeting the Congress, he said when the matter involving China is discussed, then the party's handling of the country, a reference to 1962, will also be debated.

What other opposition parties say

TMC leader and Chief Minister Mamata Banerjee's nephew Abhishek Banerjee sought to know why Amit Shah remained silent on the India-China border standoff. "As usual, the speech of Amit Shah Ji was all rhetoric and no substance. Nonetheless, since he has talked about his dream of seeing 'EXIT' of TMC, I would like to ask him one more time - 'When are the Chinese EXITING our territory'," the TMC leader tweeted with hashtag #BengalrejectsAmitShah.

Opposition Samajwadi Party and Bahujan Samaj Party on Tuesday said the "encroachment" of Indian territory by China is unacceptable and that they are with the government but other parties should rise above politics on the issue of national interest.

"In East Ladakh, the encroachment of Chinese forces for past one month is unacceptable to the country. The government should initiate strict steps to raise the morale of our forces. As BJP takes decisions by itself, it's feeling itself weak even though the people and opposition are with them on this issue," SP national president Akhilesh Yadav said in a tweet in Hindi.

BSP chief Mayawati attacked the BJP and the Congress on playing "dirty politics" on this issue when the people are facing hardships due to coronavirus pandemic.

"It's unfortunate that at time when people are facing difficult times due to the pandemic, the BJP and Congress are playing dirty politics and allegations and counter allegations on the border dispute with China. This is not in the nation interest," she said in a tweet in Hindi.

"The dispute with China and also Nepal is becoming very serious. In such a situation all parties should rise above party politics and think in nation interest. In such a matter, it would be better if the Centre takes all in confidence," she said in another tweet.