Kashmir faces new threat in form of TRF: A new group or Lashkar in disguise

The TRF draws support from Lashkar-e-Taiba and Hizbul Mujahideen 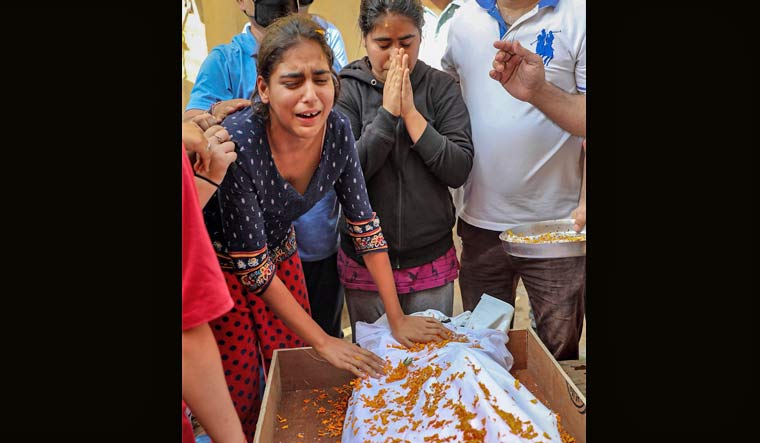 Wife and other family members of Kashmiri Pandit sarpanch Ajay Pandita mourn near his mortal remains, at their residence in Jammu | PTI

Last year, when Article 370 was revoked and Jammu and Kashmir were placed under a lockdown and communication blockade, anti-militancy operations were suspended for more than two months. According to informed sources, the priority, then, had shifted from neutralising militants to preventing a public backlash against the scrapping of Article 370 that granted limited autonomy to Jammu and Kashmir under the Constitution. A few months after the operation against militants were resumed, a new militant outfit, The Resistance Front (TRF) appeared on the scene.

It was for the first time after the JKLF, a militant group was using a non-religious name in Kashmir.

The security forces were quick to point out that the TRF was Lashkar-e-Taiba (LeT) in disguise after investigating a grenade attack at Lal Chowk on February 2 that was owned by the TRF. Four civilians and two CRPF men were injured in the attack.

An investigation into the attack led police to believe that the TRF has been created to heighten attacks in Kashmir in response to the revocation of Article 370.

Security experts believed the religion-neutral name adopted by the group is aimed at creating an impression that the group’s actions were a reaction to the Article 370 move by New Delhi and provide cover to Pakistan which has been warned of blacklisting by the Financial Action Task Force (FATF) for supporting non-state actors.

Security experts in Kashmir believe the formation of the TRF has also been necessitated because the Centre imposed one of the most stringent lockdowns and communication blockade ever to prevent a backlash to its Article 370 move.

For the separatists and Pakistan, an agitation would have been the best response to the removal of the autonomy to Kashmir, which would have mobilised world opinion against New Delhi.

Since that didn’t happen, the only option left was to up the militancy.

The TRF grabbed a lot of attention after claiming responsibility for the killing of five soldiers including four Special Forces men (Paras) in a four-day-long encounter at Dongri Behak near the line of control at Keran in Kupwara between April 1 to 4.

Five TRF men were also killed in one of the most difficult operations carried by the army in thick snow and difficult terrain.

Though the identities of the killed militants were not revealed, a family from Daamdora village in Shopian in south Kashmir claimed that one of the killed militants was their son Sajad Ahmed Hurra who was missing since 2018. The family said they recognised Sajad from pictures of the slain militants that went viral on social media. On May 3, the TRF also claimed responsibility for the killing of five security forces personnel including an army colonel and major in an encounter at Handwara in Kupwara in which two militants were also killed. According to police, the militants belonged to Lashkar-e-Taiba and one then Haider was the group's chief commander in Kashmir and was active since 2015. His associate was a resident of Pakistan occupied Kashmir (PoK).

Two days later, three CRPF men were killed when the TRF attacked a CRPF party at Handwara in Kupwara. One mentally disabled boy was also killed in the crossfire.

On May 23, J&K police arrested four persons for delivering arms and ammunition at a hospital in Sopore in Baramulla. Investigations revealed that the arrested men were working with a Pakistan-based person involved with the TRF.

According to IGP Kashmir Vijay Kumar, the TRF draws support from Lashkar-e-Taiba and Hizbul Mujahideen.

Kumar believes due to international pressure after August 5, 2019 abrogation of Article 370, Pakistan created TRF to give a local face to militancy and indicate that it has no hand in it

The TRF also used to post messages on the Telegram but after Hizbul Mujahideen chief operations commander Riyaz Naikoo’s killing, the platform has been blocked.

According to some media reports the TRF also claimed the killing of sarpanch Ajay Pandita in Anantnag. The killing of Pandita suggests that apart from the security forces, the group has planned to target civilians who it deems are part of the state apparatus or government