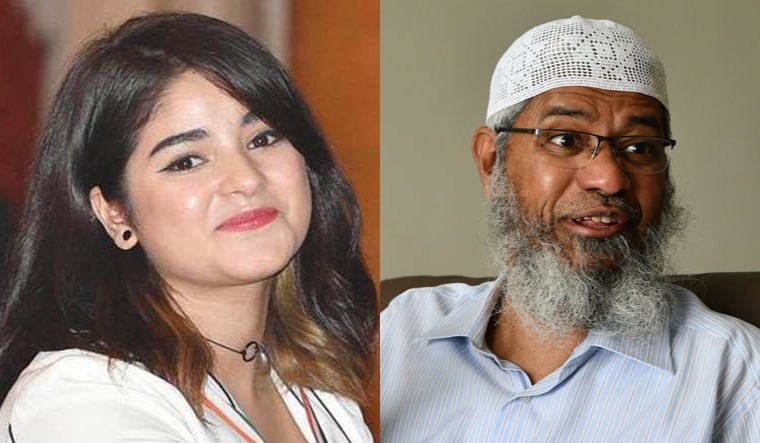 Zaira Wasim, star of the Bollywood movie Dangal, was in the news last weekend for a post on social media. Zaira had posted a verse from the Quran, which many social media users interpreted as being a justification of the locust attacks in various parts of the country.

Amid heavy trolling, Zaira briefly deactivated her Twitter and Instagram handles. "So We sent upon them the flood and locusts and lice and frogs and blood: Signs openly self-explained: but they were steeped in arrogance—a people given to sin -Qur'an 7:133 (sic)," Zaira had said in the now deleted post.

Zaira had caused a stir last year, when she announced that she was ending her career in Bollywood as it threatened her "relationship" with Islam.

On Sunday, Zaira received support from a controversial figure, Islamic scholar Zakir Naik, for both her decision to disassociate herself with Bollywood and her social media post on locust attacks. Naik, who has been based in Malaysia since 2016 and is wanted in India on charges of money-laundering and ties to Islamic extremists, uploaded a video on Zaira Wasim on his Facebook handle on Sunday.

The video is titled We Support Zaira Wasim’s Decision to Quit Bollywood and Spread the Message of Islam on Social Media—Dr Zakir Naik. Naik talks about Zaira Wasim in response to a question from a viewer.

Naik states he "congratulates" Zaira Wasim for taking the decision to leave Bollywood. Naik argues that "most of the part of Bollywood is not appropriate for a practising Muslim" and adds "It takes a lot of courage and sacrifice for a person famous in Bollywood to quit Bollywood." Referring to Islamic teachings, Naik claims Allah will reward Zaira multiple times more than "the sin she was doing".

Referring to Zaira Wasim's post on locusts, Zakir Naik alleged the "rightwing" media, which mainly supports the "present unjust government, the BJP and RSS" had taken a quote and added their own information. Naik claimed that the media had insinuated Zaira Wasim was talking about India, but declared her tweet did not mention the country.

Naik further alleged the media had done the same thing with him, referring to the 2016 Dhaka cafe terror attack. One of the attackers involved in the incident was a follower of Naik. Naik claimed the media reported the attacker was "inspired by Zakir Naik, when he was just a fan on Facebook". Naik claimed he had over 22 million followers on Facebook and asked whether he was responsible for their deeds.

Emphasising Zaira Wasim's post was "very much relevant", Naik claimed she should "continue studying the Quran, continue mentioning verses of Quran on Twitter and social media".

Interestingly, most of Zaira Wasim’s recent posts on Twitter are based on religion.