FAO expects locust swarms to reach as far as Bihar, Odisha but not south India

The swarm movements are linked to the winds 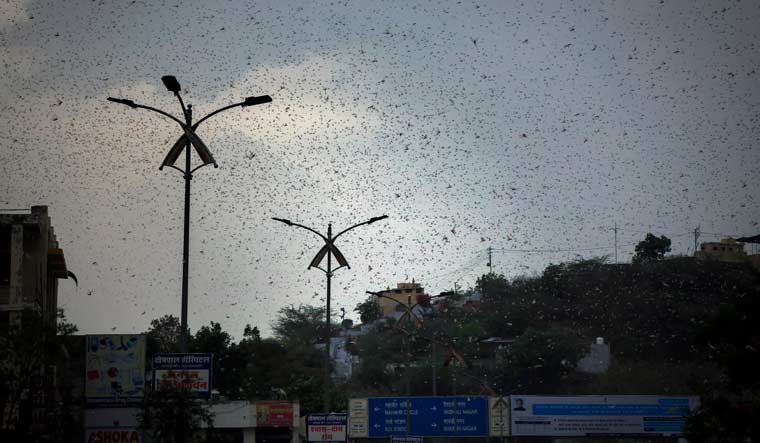 This May 10, 2020 photo shows locusts swarming over the city and nearby area in Ajmer, Rajasthan, India | AP

Swarms of locusts are expected to reach as far as Bihar and Odisha in July but there are less chances of migratory pests reaching south India, according to the Food and Agriculture Organisation (FAO).

In the past few days, there have been movements of adult groups of locusts in India, Oman, the UAE, and Uganda. Swarms are forming in the spring breeding areas and migrating east to the Indo-Pakistan border ahead of the monsoon rains, it said.

In its latest update, the FAO said locust swarms have moved into northern India.

Spring-bred immature adult groups of locust and swarms that arrived in Rajasthan from the west continued to move east in the eastern portion of the state and to the central states of Madhya Pradesh and Maharashtra.

Much of these movements were associated with strong westerly winds from Cyclone Amphan in the Bay of Bengal, the FAO said and added the control operations are underway.

The FAO warned that "several successive waves of invasions can be expected until July in Rajasthan with eastward surges across northern India as far as Bihar and Orissa followed by westward movements and a return to Rajasthan on the changing winds associated with the monsoon,"

These movements will cease as swarms begin to breed and become less mobile, it said.

"Swarms are less likely to reach south India" and also to Nepal and Bangladesh, the FAO said.

The crop-eating pests have entered India through Pakistan. Besides Rajasthan, Punjab, Gujarat and Madhya Pradesh, swarms have entered Uttar Pradesh's Jhansi district and also Maharashtra's Ramtek city, according to the Indian government's data.

FAO Director-General Qu Dongyu had on May 22 warned that efforts to control Desert Locusts will take time.

"Our gains have been significant, but the battle is long and is spreading to new areas. It is clear that we cannot declare victory yet. Upsurges of this magnitude are rarely defeated in a few months," Qu said.

In the coming months, desert locusts will continue breeding in Ethiopia, Kenya and Somalia. New swarms will form in June and migrate to Sudan through South Sudan and pose a risk to the Sahel in West Africa.

There is also an increased risk along both sides of the Indo-Pakistan border, where outbreaks in Iran, and Pakistan are still ongoing.

"The locusts, combined with the impacts of COVID-19, could have catastrophic consequences on livelihoods and food security," Qu emphasized.

According to estimates, about 720,000 tonnes of cereal have been saved so far -- by preventing the locusts' spread and damage to many more hectares - enough to feed five million people for a year. The livelihoods of an additional 350,000 pastoral households were also spared, the FAO added.