Explainer: India's 'worst' locust plague, and why it needs to be controlled before monsoon

Drones are now being issued to tackle the alarming situation 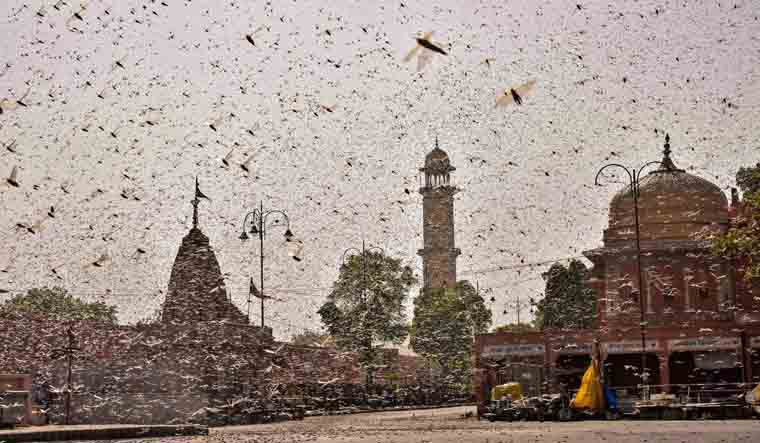 India is currently reeling under the worst plague of locusts, a crop-damaging migratory pest, in decades; the government has stepped up efforts to control swarms in Rajasthan, Gujarat, Punjab and Madhya Pradesh. Most recently, the locusts have entered Katol and Parseoni in Nagpur district of Maharashtra, with eyes set on neighbouring Bhandara district.

What are locusts and what causes this plague?

A locust is a large, mainly tropical, grasshopper with powers of flight and it migrates in vast swarms which cause extensive damage to vegetation. The desert locust is considered the most destructive migratory pest in the world and a single swarm covering one square kilometre can contain up to 80 million locusts. Such an invasion poses a significant threat to the livelihoods and food security.

Soumitra Dasgupta, Inspector General, Wildlife, Ministry of Environment, had told media that it was the desert locust which has attacked India in huge numbers and may lead to crop losses. "Locusts are a regular feature in the country but this attack is huge. It is a once-in-a-three-decade situation and timed very badly for us as we are already dealing with the coronavirus."

Roxy Mathew Koll, senior scientist, Indian Institute of Tropical Meteorology and Lead Author, IPCC Oceans and Cryosphere, had noted that the outbreak started after warm waters in the western Indian Ocean in late 2019 fuelled heavy amounts of rains over east Africa and the Arabian Peninsula.

"These warm waters were caused by the phenomenon called the Indian Ocean Dipole—with warmer than usual waters to its west, and cooler waters to its east. Rising temperatures due to global warming amplified the dipole and made the western Indian Ocean particularly warm. Heavy rain triggers the growth of vegetation in arid areas where desert locusts can then grow and breed. These locusts which migrated to India early this year might have found greener pastures, as the pre-monsoon rains during March-May were in excess over north India this year," Koll noted.

Why the locust swarms need to be controlled before monsoon?

Indian Council of Agricultural Research (ICAR) Director General Trilochan Mohapatra told media that the insects have attacked about 40,000 to 42,000 hectares of land. There is no impact on rabi (winter) crops like wheat, pulses and oilseeds as most of them are harvested by now. Swarms have already attacked crops in Rajasthan and Madhya Pradesh, and affected orange cultivation in Nagpur.

"The focus now is to stop the outbreak prior to arrival of monsoon rainfall in June-July when locusts will mature and breed. If infestation is not controlled, it will pose a threat to kharif crops," he said.

Food and Agriculture Organisation (FAO's) Senior Locust Forecasting Officer Keith Cressman had earlier said in a virtual briefing that, currently, the locust invasion is the most serious in Kenya, Somalia, Ethiopia, southern Iran and in parts of Pakistan. Starting June, infestations in India and Pakistan could be supplemented by other swarms coming from East Africa, northern Somalia, he said.

What is making the plague so hard to control?

Usually, the locust swarms enter the scheduled desert area of India through Pakistan for summer breeding in the month of June/July with the advent of monsoon. This year, however, incursions of locust hoppers and pink swarms have been reported much earlier because of presence of residual population of locust in Pakistan which they couldn't control last season, the ministry of agriculture said in a statement.

Pink immature adults (the lifecycle of a locust goes from eggs, to hoppers, to very active pink immature adults, to yellow mature adults which lay eggs) fly high and cover long distances during day hours along with the westerly winds coming from the Pakistan side. Most of these pink immature adults settle on trees during night, and mostly fly during the day. There are active swarms of immature locusts in 8 districts in Rajasthan (Barmer, Jodhpur, Nagaur, Bikaner, Ganganagar, Hanumangarh, Sikar and Jaipur) and 7 districts in Madhya Pradesh (Satna, Gwalior, Seedhi, Rajgarh, Baitul, Devas, Agar Malwa).

"The immature locust is very active and their mobility makes it difficult to control the swarm at one location and it takes four to five days of control at different locations to control a particular locust swarm," the ministry said in the statement.

What are the government measures to control the plague?

The nodal authority for dealing with locusts is the Locust Warning Organisation (LWO) under the agriculture ministry. The government has placed an order for buying 60 spraying machines from UK-based company Micron, and two firms have been finalised for supply of drones for aerial spraying of insecticides for effective control over tall trees and inaccessible areas. At present, 89 fire brigades for pesticide spray, 120 survey vehicles, 47 control vehicles with spray equipment and 810 tractor mounted sprayers have been deployed for effective locust control, as per requirement on different days.

For effective control of locusts beyond scheduled desert areas, temporary control camps have been established in Ajmer, Chittorgarh, Dausa in Rajasthan; Mandsaur, Ujjain, Shivpuri in Madhya Pradesh and Jhansi in Uttar Pradesh, the ministry added. The ministry said it has received permission from civil aviation ministry for use of drones for locust control. "Two firms have been finalised through tender for use of drones for spray of pesticides for locust control," it added.

Currently, the Locust Control Offices have 21 Micronair and 26 Ulvamast spray machines which are being utilized for locust control. Meanwhile, supply order for procurement of additional 55 vehicles has been placed to strengthen the control potential. Adequate stock pesticide Malathion has been maintained at Locust Control Organisations.

Advisories have been issued to Rajasthan, Gujarat, Haryana and Punjab regarding the locust attack and necessary measures to be taken for effective control and pesticides that are to be used for effective locust control in cropped areas.