Ayodhya: Archaeologists yet to examine artefacts found at mandir site 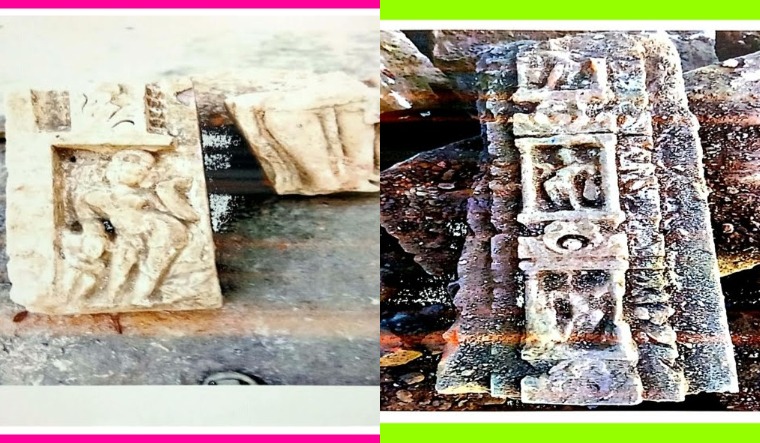 Some of the artefacts found in Ayodhya | Supplied

The artefacts found at the site of the Ram Janmbhoomi Mandir at Ayodhya have not yet been examined by the archaeological authorities though they have been informed of it.

Sharad Sharma, Vishwa Hindu Parishad (VHP) spokesperson based in Ayodhya, told THE WEEK, “The findings are of pink and black sandstone. We do not have any knowledge about the period they belong to. Once the archaeological authorities find that out, they will be displayed at a museum at the site.”

Work at the site of the Ram Mandir had restarted on May 11 after permission from the district authorities. The artefacts have been found since then, though the VHP released images to the media on Wednesday evening.

“All guidelines of sanitation, social distancing and masks have been followed. Three JCBs, one crane, two tractors and 10 labourers are at work,” said a statement released by the VHP.

The artefacts found during the levelling of the site include broken idols of gods and goddesses, flowers, urns, doorknobs and niches. In addition, seven black touchstone pillars, six red sandstone pillars and a five-feet carved artefact that looks like a Shivling (representation of Lord Shiva) have also been found.

Though seers in the city have said that the artefacts point to the existence of a temple and validates the verdict of the Supreme Court in November 2019, the VHP has not issued a formal statement to that effect.

Acharya Satyendra Das said, “The findings are clear evidence of the fact that a mandir was brought down to build the mosque. Our faith was always unwavering on that”.

Such findings of artefacts are not new. In 2003, the Archaeological Survey of India, on the directives of the High Court, had carried out an excavation of the then disputed site. It had found artefacts dating back to the 13th century BC, covering the Kushan to the Gupta periods. The ASI had also recovered some remains of what seemed like a Jain temple. These findings were referred to in the Supreme Court verdict to say that the Babri Masjid was not built on vacant land but over a structure that was 'not Islamic'.

No outsiders, including the media, are allowed at the current work site where the local police have been standing guard.