Two female doctors were injured in the attack, case registered against unknown people 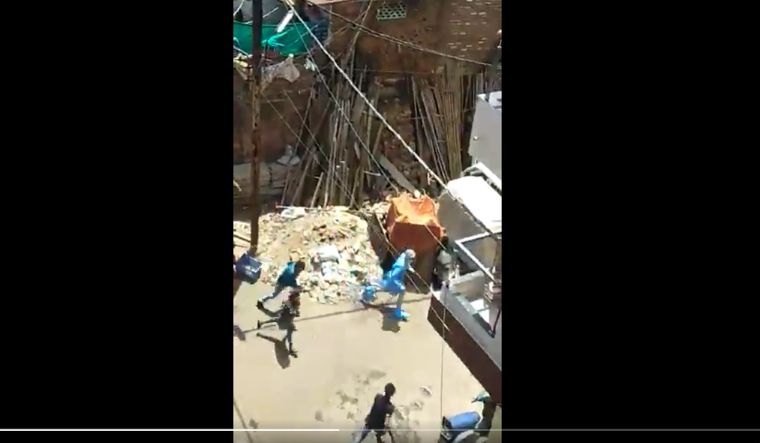 Healthcare workers and civic officials who were in an Indore neighbourhood to screen residents for coronavirus in Madhya Pradesh were attacked by angry locals on Wednesday. Two female doctors were injured in the attack and had to be rescued by police.

A video of the incident has now gone viral on social media. In the video, two healthcare personnel in personal protective equipment (PPE) can be seen running away from the mob who started pelting stones at them in Tat Patti Bakhal area of Indore. The group of locals becomes a mob of around 100 angry residents shouting abuses, throwing sticks and stones and chasing them down the narrow lane.

#WATCH Madhya Pradesh: Locals of Tatpatti Bakhal in Indore pelt stones at health workers who were there to screen people, in wake of #Coronavirus outbreak. A case has been registered. (Note-Abusive language) (1.04.2020) pic.twitter.com/vkfOwYrfxK

The two women doctors suffered injuries on their legs in the mob attack. The health department team consisted of five people, including three doctors.

According to various media reports, a case has been registered against unknown people. A case of rioting will be pursued against the mob.

This is not the first incident of attack in India against healthcare workers who visit localities for coronavirus screening. Earlier, similar incidents were reported from Hyderabad in Telangana and Surat in Gujarat.

There were also complaints from doctors and healthcare workers that they were evicted from their homes by panicked landlords and housing societies.

Prime Minister Narendra Modi has urged people against mistreating doctors and healthcare workers as they battle to save the country from one of the most infectious viral attacks in recent years. He called doctors the "incarnations of God" and said those harassing them would face police action.