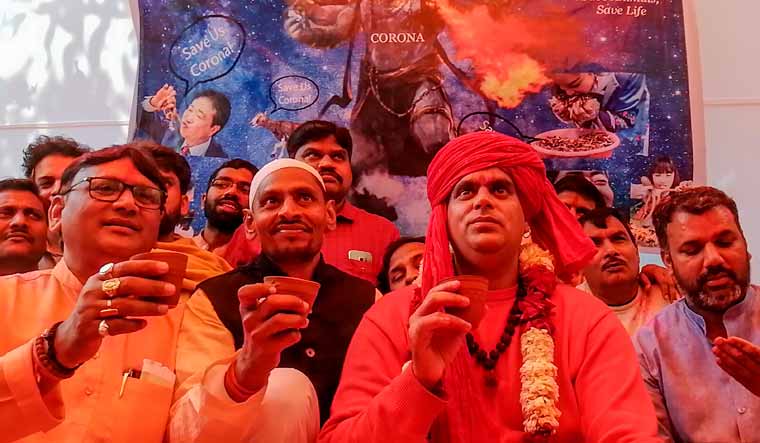 After a much publicized ‘gau mutra’ (cow urine) party, the Hindu Mahasabha chief has called upon couples to abstain from any ‘non-veg’ activities.

Chakrapani Maharaj’s latest injunction is that couples should avoid all intimate contact with each other. “For one whole year, couples must practise abstinence and constantly chant ‘Om Namah Shivay’,” he said. The injunction is extended to all adult boys and girls, too. The chanting can be in the name of any God one believes in and can be done by people of all religious faiths.

The Maharaj has been in the news for propagating numerous methods of saving the world from the novel coronavirus. From the burning of gum resin, to cow dung tilaks and offering a drink of cow urine to all foreigners coming into the country at the airport itself, he has made numerous suggestions.

“I have also suggested to the prime minister that gau mutra should be sent to heads of different countries, especially those who have been affected by the virus,” he told The Week in reference to Canadian Prime Minister Justin Trudeau’s wife who has tested positive for the virus.

Chakrapani Maharaj’s suggestion for abstinence stems from the four stages or ashrams of life that were prescribed in ancient Indian texts. “The grihast ashram (housekeeper’s stage) extended from the age of 25 to 50, after which came the vana prastha (stage of leaving for the forests). Now those distinctions have vanished and the world is blinded by lust,” he said.

For the period of abstinence to be fruitful, it should be practised in mind, speech and action. “The time should be used to expand the boundaries of your mind. The focus should be on study, on knowing one’s true self, on serving one’s family, one’s community and the nation,” he said.

“Ek doosre mein kaam nahin, Ram dekho” (Do not look for lust but for God in each other),” the Maharaj told The Week. “This will build goodwill and love among fellow humans,” he added.

After the success of the first gau mutra party on Saturday, the second party is to be held on March 25 in Haryana. “We are also planning gau mutra camps for easy availability,” he said.

On being asked about the quality of gau mutra, given that cows are injected for higher yield of milk and fed on urea rich fodder, the Maharaj said that certain conditions were to be followed for the urine to be effective. “The best is urine from a calf. It should not be taken from a pregnant, lactating or diseased cow. Neither should it be taken from stray cows who feed on rubbish,” he said.

If one found cow urine unpalatable, there was always the option of having gau mutra ark (distilled cow urine). Another way of having it was a concoction of cow dung and cow urine to which honey, sugarcane juice, bananas and coconut water were added.

Chakrapani Maharaj said that the Mahasabha had planned a series of parties all over the country for the welfare of the world. All parties would have the singing of bhajans and chanting. “We want to change the concept of what a party means,” he said.