CPI(M) to protest during Donald Trump's visit to India 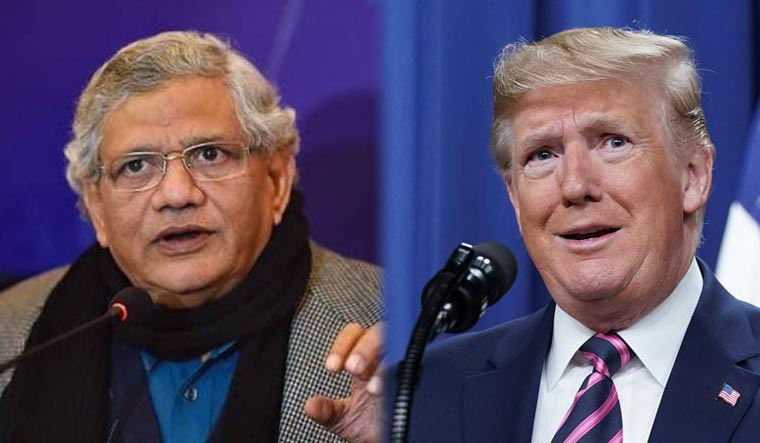 CPI(M) general secretary   Sitaram Yechury said on Thursday that his party will stage protest during US President Donald Trumps visit to the country later this month, as he was coming to boost American economy at the cost of India's interest.

Yechury said the Left workers will launch agitation wherever Trump goes during the tour on February 24 and 25.

"May be in Delhi or in Gujarat, the party activists will certainly protest", he said.

The CPI(M) leader said the protests would be held on two counts.

"Firstly, America is putting pressure and (Narendra) Modi is succumbing to completely open up our economy which is the gain they want to achieve in order to give support to Modi on issues like CAA, Article 370 and others, Yechury told reporters on the sideline of an anti-CAA rally here.

"That is the quid pro quo going on, which is not in Indias interest.

"This apart, we will be spending billions of dollars for buying US military equipments, to bailout US economy while destroying our own," Yechury remarked.

Replying to a question on the increse in LPG cylinder price, the CPM leader said his party has been protesting against it at many centres and places.

"The price hike is completely unwarranted. The international oil prices are not on escalating. In fact it is deescalating a little.

"This is all because of the crisis created in the balance sheets of our oil majors by the Modi government which started borrowing from them in terms of greater dividends and destroying the balance sheet," he alleged.

"In order to stablise the balance sheets, they are doing it (price hike of LPG cylinder). There is no necessity at all for increasing the price," Yechury said, adding the balance sheet is rectified in order to prepare the oil majors for disinvestment.

On the Union Finance Minister Nirmala Sitharamans "Green shoots" remark, Yechury said: "With due respect to the finance minister, she may be suffering from colour blindness."

Sitharaman had on Tuesday last said the economy is not in trouble and green shoots are visible with the country moving towards a USD 5 trillion economy.