Why did the European Union defer voting on its resolution against CAA?

"Friends of India prevailed over the friends of Pakistan," government officials said 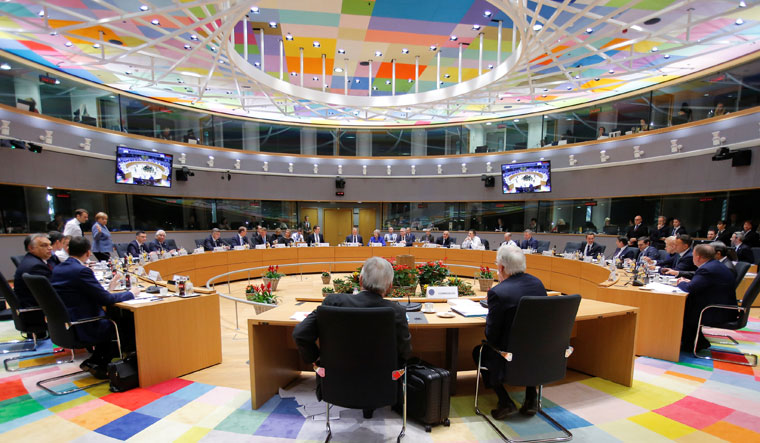 The European Parliament has decided to defer vote on a resolution against India's new citizenship law (CAA). The voting was scheduled for today. It has instead decided to take up voting against the CAA during its new session beginning March 2. Government sources told PTI that the deferment of the voting was a diplomatic victory, adding that friends of India prevailed over the friends of Pakistan in the European Parliament.

The Indian government has maintained that the CAA, which was passed by the Indian Parliament last month, is an internal matter of the country and stressed that the goal is to protect the oppressed minorities of neighbouring countries. It has been extremely critical of the move (resolution) in Brussels, which the European Commission—the executive arm of the economic bloc—has sought to distance itself from. "As members of Inter Parliamentary Union, we should respect sovereign processes of fellow legislatures, especially in democracies," Lok Sabha Speaker Om Birla on Monday wrote to European Parliament President David Maria Sassoli.

Six political groups of members of the European Parliament had moved a joint resolution against India's citizenship law, calling it discriminatory. The European Parliament motion was critical of any protection being denied to Muslims, and that although India shared a border with Bhutan, Burma, Nepal and Sri Lanka, the CAA does not bring Sri Lankan Tamils under its purview, who form the largest refugee group in India and who have been residents in the country for over 30 years. "Amnesty International India has pointed out that the CAA does not bring under its purview other persecuted minorities, including Muslim populations such as the Rohingya in Burma, Ahmadis in Pakistan, Hazaras in Afghanistan and Bihari Muslims in Bangladesh," it noted.

"Strenuous efforts of outgoing British MEP [Member of European Parliament] Shaffaq Mohammad to have a resolution passed by the European Parliament against India on the penultimate day before Brexit were defeated," a source told PTI.

The government has been maintaining that the CAA is a matter internal to India and it was adopted following a due process through democratic means. A move by a group of MEPs to totally reject the resolution against the CAA was thwarted at the EU Parliament.

Why was voting deferred?

India reached out to almost all countries of the powerful bloc, trying to persuade them against going ahead with the resolution against the CAA. Sources said the European lawmakers agreed to delay the voting to get a direct perspective from about the CAA from External Affairs Minister S. Jaishankar who is scheduled to visit Brussels to prepare the ground for Modi's visit in mid-March.

The move is also considered as an attempt to not jeopardise Prime Minister Narendra Modi's visit to Brussels in March for a bilateral summit with the 28-member bloc. The EU lawmakers also wanted to wait for judicial review of the contentious law by India's Supreme Court.

Eventhough voting on the resolution was deferred till March, the debate on CAA progressed in the European Parliament on Wednesday. The debate opened with a statement by Helena Dalli, the vice president of the European Commission and High Representative of the Union for Foreign Affairs and Security Policy, who spoke strongly in favour of the "rich, frank and open" relationship the European Union (EU) shares with India. She highlighted Prime Minister Narendra Modi's upcoming visit to Brussels in March for the 15th India-EU Summit.

"We believe that it is the role of the Supreme Court of India to assess the compliance of the law with the Constitution and we are confident that the ongoing judicial process will contribute to appeasing the tensions and violence witnessed over the past weeks in the country," said Dalli, who concluded the debate with a message to "pursue and intensify" dialogue with India as a "respected democracy" and valued EU partner.

Two Indian-origin MEPs, Dinesh Dhamija and Neena Gill, were among a host of members who spoke up in India's favour to point out elements of "disinformation" around the CAA and the NRC within the parliamentary motion. Thierry Mariani, a French MEP, alluded to the "hand of Pakistan" in the motion being tabled, while others condemned it as meddling in another country's internal affairs.

Pakistan-origin MEP Shaffaq Mohammed and others such as S&D's John Howarth and VERTS/ALE's Scott Ainslie described the CAA as a "highly discriminatory" legislation and alleged that the EU had crumbled in the face of India's diplomatic lobby and prioritised trade and business interests over human rights concerns by postponing a vote on the motion.

"The only lobby that has won today is that of common sense and respect," countered ECR's Polish MEP Ryszard Czarnecki. Earlier, the European Parliament had announced that the vote on the motion would be postponed to the plenary session in March.

"Following a decision by MEPs at the opening of Wednesday plenary session in Brussels, the vote on the resolution on India's Citizenship (Amendment) Act (CAA) 2019 has been postponed to the March session," said a statement from the European Parliament.

One of the groups behind the motion, the Progressive Alliance of Socialists and Democrats in the European Parliament (S&D), said the reason for the postponement was because the CAA was undergoing a legal process in India. "As the Supreme Court in India will rule in the coming days linked to this issue and, as such, the law may be adapted, it was considered better to vote on the resolution in the European Parliament when there is full clarity on the situation," a spokesperson said.

However, another group GUE/NGL, objected to the postponement, saying they "disagreed" with the delay.

What the resolution says

The resolution takes note of the United Nations High Commissioner for Human Rights statement last month, which described the CAA as "fundamentally discriminatory in nature", and also of other UN as well as the European Union (EU) guidelines on human rights as it calls on the Indian government to "repeal the discriminatory amendments". "While the CAA's stated goal of protecting persecuted groups is welcome, an effective national asylum and refugee policy should be just and holistic in nature and apply to all those in need," it notes, describing the CAA as "discriminatory in nature and dangerously divisive".

There is also a reference to the Indian government's "push" for a nationwide citizenship verification process, the National Register of Citizens (NRC), which it says "aims to strip Muslims of their citizenship rights while protecting those of Hindus and other non-Muslims". The new citizenship law passed by Parliament in December 2019 offers citizenship to non-Muslim persecuted religious minorities from Pakistan, Bangladesh and Afghanistan.

India has been witnessing massive protests against the new law, with opposition parties, civil rights groups and activists saying granting citizenship based on religion is against the Constitution's foundational principle.