Explainer: Kalapani territory dispute between India and Nepal, and upcoming talks to resolve it 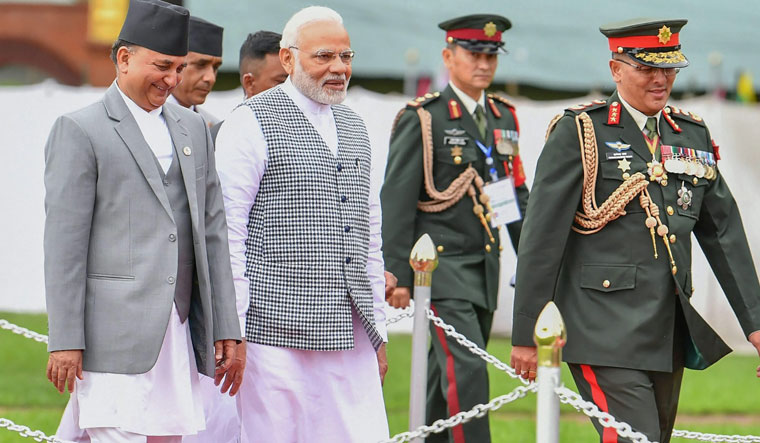 In November 2019, India released fresh maps of the then newly created Union Territories (UTs) of Jammu and Kashmir, and Ladakh, along with a map of India depicting these UTs. In the maps, Pakistan-occupied Kashmir was part of Jammu and Kashmir, while Gilgit-Baltistan was included in Ladakh.

An unlikely third party objected to the fresh illustrations of Indian borders. The Nepal government lodged a protest against the inclusion that Kalapani area in India's far West, claiming it as Nepalese territory. Kalapani, they claimed, was a part of the Darchula district of Nepal, while the Indian map placed it under the Pithoragarh district in the state of Uttarakhand. MEA spokesperson Raveesh Kumar then stated: "Our map accurately depicts the Indian territory. The fresh map has not revised our boundaries with Nepal. The boundary delineation exercise with Nepal is ongoing under the existing mechanism. We reiterate our commitment to finding a solution through dialogue in the spirit of our close and friendly bilateral relations."

The claims against the Indian maps were that, according to the Sugauli treaty between Nepal and British India in 1815, Mahakali River that runs through the Kalapani area was acknowledged as the boundary between the two countries. The region lies close to a geographically significant tri-junction with China (Tibet), and Indo-Tibetan border police has marked its presence in the region.

Another territory dispute revolved around Narsahi-Susta in Bihar.

Initially, Nepal's foreign ministry responded, "Nepal government is committed to protect its international border, and any border related issue relating to the two friendly countries need to be resolved through diplomatic channel on the basis of historical documents and evidence," the foreign ministry said.

On November 18, Nepal's Prime Minister K.P. Sharma Oli said that he would ask India to withdraw its forces and asserted that its "patriotic government" will not allow anyone to encroach on "even an inch" of its territory. Students across Nepal took to the streets protesting ‘Indian occupation of Nepali territory’. Oli had then called for an all-party meeting, which included former prime ministers and ex-foreign ministers. Leaders and other participants at the meeting asked him to take up the issue with India immediately.

On December 26, former Nepalese prime minister Baburam Bhattarai said that border disputes can be resolved through talks, underlining that Kathmandu cannot harm New Delhi's security interest. Bhattarai, speaking at a programme organised by Nepal-India Friendship Society to bid farewell to Indian ambassador Manjeev Singh Puri, said India and Nepal should try to understand each other's concern. Underlining that "Nepal cannot harm India's security interest", the co-chairman of Nepal Socialist Party said there is a need for a highest political level meeting between the two countries to address the issues relating to Kalapani and Susta borders.

How did Indo-Nepal relations pan out in 2019

India's relations with Nepal continued to grow in 2019 with high-level bilateral visits and increased energy collaboration, including the inauguration of the first-ever cross-border petroleum pipeline in South Asia, amidst China's heavy investments in the landlocked country. Nepal enjoys a special significance in India's foreign policy due to its geographical, historical, cultural and economic linkages. The people of the two countries maintain close bonds through marriages and family ties, also known as 'Roti-Beti ka Rishta' (relation of food and family). The Himalayan nation, sandwiched between India and China, witnessed political instability for many years before the pro-China Left alliance came to power in the historic polls in December, 2017.

Though the year began with Nepal banning the use of Indian currency notes of Rs 2,000, Rs 500 and Rs 200 denominations—a move that had an impact on Indian tourists visiting the Himalayan nation where Indian currency is widely used the bilateral relations remained firmly on track, notwithstanding the minor hiccups. The bilateral engagements kicked off in February with Nepal-India Joint Secretary-level meeting in Pokhara during which the top officials from both the sides reviewed the bilateral trade and transit treaty. Foreign Secretary Vijay Gokhale called on Prime Minister Oli in Kathmandu in March and held talks on a wide range of issues, including railways and waterway projects, with the top Nepali leadership. The two sides also reviewed progress of post-earthquake reconstruction of projects in housing, education, health and cultural heritage sectors. India has pledged an assistance of $250 million to Nepal for the reconstruction projects.

PM Modi and Oli also jointly inaugurated the 69-km long Motihari-Amlekhjung oil pipeline through video conference in September. The pipeline was constructed with Indian assistance of Rs 324 crore. This was the first cross-border petroleum pipeline constructed in the South Asian region.

On the other hand, China has been investing heavily in the landlocked nation in recent years, continued its engagements with Nepal with high-level visits. Chinese President Xi Jinping travelled to Nepal, becoming the first head of the Communist nation to visit Nepal in 23 years, and announced Rs 56 billion aid to help the country's development programmes. During his visit, China agreed to upgrade the Araniko Highway linking Kathmandu with Tibet that was shut down since the 2015 earthquake and conduct a feasibility study of trans-Himalayan railway at the earliest as per Nepal's request. It has been widely felt that Nepal's Communist government is inching closure to its northern neighbour.