A techie from Chennai helped identify the location 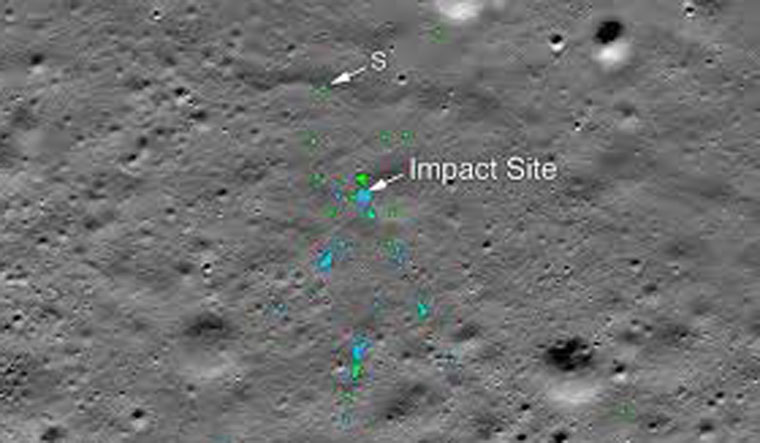 On September 26, NASA released a mosaic image of the lunar site where India's Vikram lander crashed. NASA released an image taken by its Lunar Reconnaissance Orbiter (LRO) that showed the site of the spacecraft's impact (September 6) and associated debris field, with parts scattered over almost two dozen locations spanning several kilometers.  The organisation invited the public to search it for signs of the lander.

Now, Shanmuga Subramanian, an engineer from Chennai, contacted the LRO project with a positive identification of debris— with the first piece found about 750 metres northwest of the main crash site.

Blasting off in July, India had hoped with its Chandrayaan-2 mission to become just the fourth country after the United States, Russia and regional rival China to make a successful moon landing, and the first on the lunar south pole. The main spacecraft, which remains in orbit around the moon, dropped the unmanned lander Vikram for a descent that would take five days, but the probe went silent just 2.1 kilometers above the surface. Vikram, with rover 'Pragyan' housed inside it, hit the lunar surface after communication with the ground-stations was lost during its final descent.

Days after the failed landing, the Indian Space Research Organisation (ISRO) said it had located the lander, but hadn't been able to establish communication.

ISRO had just 14 days to re-establish link with the lander, which, after a hard landing, lay tilted on the surface of the moon. Why 14 days? September 7, when the launch happened, was the beginning of a lunar day—equal to 14 earth days— and the mission life of the lander and rover is one lunar day. After the lunar day ends, around September 21, the part of the moon where Vikram landed would be shrouded in darkness, rendering the solar-powered batteries of the lander obsolete. Communication was then cut off.

The LRO had first attempted to snap images of the rover on October during a flyby on September 17—though bad lighting due to the dusk timing obscured the site. The LRO passed over the site again on October 14, under better lighting conditions, spelling hope that the lander’s physical condition could be identified at last. But, NASA still had found no evidence of the lander.

"The Lunar Reconnaissance Orbiter imaged the area of the targeted Chandrayaan-2 Vikram landing site on October 14 but did not observe any evidence of the lander," Noah Edward Petro, the Project Scientist for the LRO mission, had then told PTI in an exclusive email interaction. Petro said that the camera team carefully examined the images and employed the change detection technique—using a ratio of an image from prior to the landing attempt to the one acquired on October 14. "It is possible that Vikram is located in a shadow or outside of the search area. Because of the low latitude, approximately 70 degrees south, the area is never completely free of shadows,” John Keller, Deputy Project Scientist LRO Mission, had then told PTI.