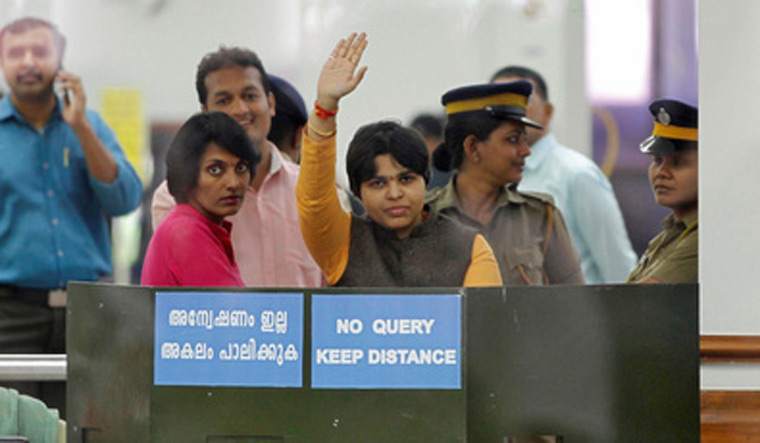 (File) Trupti Desai (left) inside the Kochi Airport in 2018 | Reuters

Women's rights activist Trupti Desai announced on Tuesday that she would be returning to Pune from Kochi by midnight after the Kerala Police refused to give her protection for her planned visit to Sabarimala. Desai had arrived at the Kochi Airport early on Tuesday and had declared she would visit Sabarimala, irrespective of whether she was given security.

had indicated that it would not provide protection to activists to enter Sabarimala.

Soon after her arrival at Kochi Airport, Desai was taken to the Police Commissionerate in Ernakulam, where a large number of activists of rightwing groups arrived.

The activists belonging to the Sabarimala Karma Samithi staged protests outside the Commissionerate and demanded that Desai abandon her plans to visit Sabarimala. The protesters, who included a large number of women, dispersed after the police assured the activists would not be allowed to proceed.

According to media reports, Desai had demanded a "written statement" from the Kerala Police that she would not be provided protection to visit Sabarimala.

Meanwhile, Bindu Ammini, an activist who was attacked with chilli powder by a rightwing activist, claimed she arrived in Kochi after a request from Desai. Bindu Ammini rejected allegations by a minister in the Kerala government that Desai's plans to visit Sabarimala was "part of a conspiracy". She warned of filing a contempt of court case against the Kerala government for not providing security to the activists.

Interestingly in November 2018, Desai had to abandon plans to visit Sabarimala after Hindu activists protested her arrival at the Kochi Airport. Desai returned after a 'standoff' that lasted hours, with rightwing activists gathering outside the airport.