SC likely to pronounce its judgment on Saturday 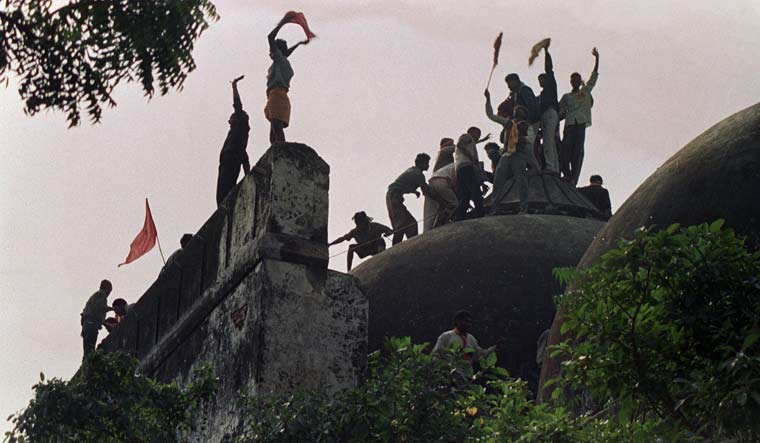 [File] Right wing activists wave banners as they stand on the top of a stone wall and celebrate the destruction of the Babri Mosque in Ayodhya on December 6, 1992 | AFP

The Supreme Court is likely to pronounce its judgment in the Ram Janmabhoomi-Babri Masjid land dispute case on Saturday. Here is a chronology of events in the politically-sensitive case.

1949: Idols of Ram Lalla placed under a central dome outside the disputed structure.

1950: Paramahansa Ramachandra Das files suit for continuation of worship and keeping the idols.

1981: Uttar Pradesh (UP) Sunni Central Waqf Board files suit for possession of the site.

February 1, 1986: Local court orders the government to open the site for Hindu worshippers.

April 3, 1993: ‘Acquisition of Certain Area at Ayodhya Act’ passed for acquisition of land by Centre in the disputed area. Various writ petitions, including one by Ismail Faruqui, filed in Allahabad HC challenging various aspects of the Act. Supreme Court exercising its jurisdiction under Article 139A transferred the writ petitions, which were pending in the High Court.

October 24, 1994: Supreme Court says in the historic Ismail Faruqui case that mosque was not integral to Islam.

March 13, 2003: Supreme Court says, in the Aslam alias Bhure case, no religious activity of any nature be allowed at the acquired land.

March 14: Supreme Court says interim order passed should be operative till disposal of the civil suits in Allahabad HC to maintain communal harmony.

September 30, 2010: Allahabad High Court , in a 2:1 majority, rules three-way division of disputed area between Sunni Waqf Board, the Nirmohi Akhara and Ram Lalla.

August 8, 2017: UP Shia Central Waqf Board tells SC mosque could be built in a Muslim-dominated area at a reasonable distance from the disputed site.

September 11, 2017: Supreme Court directs Chief Justice of the Allahabad HC to nominate two additional district judges within ten days as observers to deal with the upkeep of the disputed site.

November 20, 2017: UP Shia Central Waqf Board tells SC temple can be built in Ayodhya and mosque in Lucknow.

March 14, 2018: Supreme Court rejects all interim pleas, including Swamy’s, seeking to intervene as parties in the case.

April 6, 2018: Rajeev Dhavan files plea in Supreme Court to refer the issue of reconsideration of the observations in its 1994 judgement to a larger bench.

July 6, 2018: UP government tells Supreme Court some Muslim groups were trying to delay the hearing by seeking reconsideration of an observation in the 1994 verdict.

September 27, 2018: Supreme Court declines to refer the case to a five-judge Constitution bench. Case to be heard by a newly constituted three-judge bench on October 29.

October 29, 2018: Supreme Court fixes the case for the first week of January before an appropriate bench, which will decide the schedule of hearing.

November 22, 2018: Supreme Court dismisses public interest litigation (PIL) seeking direction to organisations and public at large to “behave” and not air their views that can spoil the atmosphere till it decides the title dispute case.

December 24, 2018: Supreme Court decides to take up petitions on case for hearing on January 4.

January 4, 2019: Supreme Court says an appropriate bench constituted by it will pass an order on January 10 for fixing the date of hearing in the title case.

January 10, 2019: Justice U U Lalit recuses himself prompting Supreme Court to reschedule the hearing for January 29 before a new bench.

January 27, 2019: Supreme Court cancels the January 29 hearing due to non-availability of Justice S A Bobde.

March 6, 2019: Supreme Court reserves order on whether the land dispute can be settled through mediation.

May 9, 2019: The three-member panel submits interim report in SC