Keeladi excavation and different dimensions of the 'language war'

“The findings have again proved that Tamil is the oldest language" 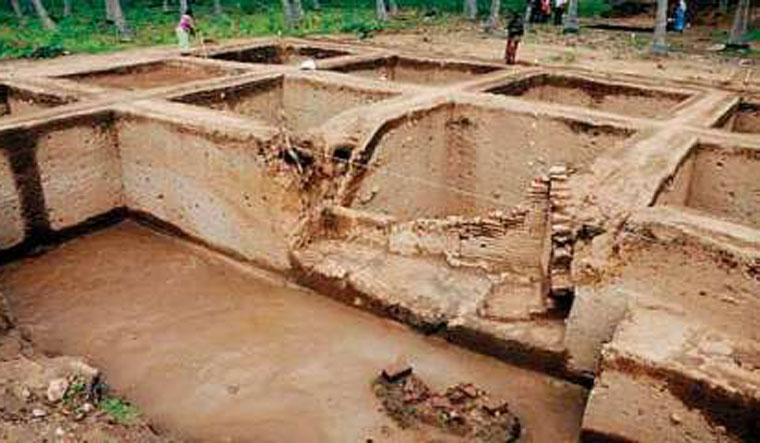 On September 19, the Tamil Nadu Archaeological Department (TNAD) released a report Keeladi-An Urban Settlement of Sangam Age on the Banks of River Vaigai. The report reveals "cultural deposits", which were discovered in excavations in Keeladi near Sivaganga in Tamil Nadu, were dated to a period between "6th century BCE and 1st century CE".

The products could be dated as far back as 580 BCE, the report noted. The evidence provided by the dig: A settlement by the Vaigai plains, which was urbanised in Tamil Nadu around 6th century BCE.

The report found: The recent scientific dates obtained for Keeladi findings push back the date of Tamil-Brahmi to another century—6th century BCE. These results clearly ascertained that they attained the literacy or learned the art of writing as early as 6th century BCE. In short, the Sangam era, which marked the largest social and cultural developments in Tamil Nadu, could be much earlier than 300 BCE when it was assumed to have commenced.

Another finding: But it is to be noted that this site didn’t yield any objects meant for worship so far. This has sparked a debate on the historical connotations of the findings, and the larger political aspect.

First, a short history primer, with regards to a THE WEEK report on two scientific papers in Science and Cell. Genetic and archaeological studies have long indicated three major waves of migration into India. The first one is the Out-of-Africa (OoA) migration that gave us the earliest Indians 60,000 years before.

Secondly, in the early Neolithic period, it was believed there was an influx of Iranian farmers from the Zagros region, mixing with the earliest Indians to produce a population strain commonly known as the Ancestral South Indians (ASI). The latter largely populated the Harappan civilisation, spread over 2600 and 1900 BCE, and considered one of the largest urban societies of its time with Dholavira in Gujarat, Mohenjo Daro in Sindh and Rakhigarhi in Haryana as some of its major centres.

Thirdly, in the turn of the second millennium (2000 BCE), when the IVC was in a stage of decline, traditional literature claims an influx of central Asian Steppe pastoralists (referred to as the Aryans), who brought with them Vedic culture and Indo-European languages including the first iterations of Sanskrit. ASI mingled with the pastoralists, producing a second population strain, Ancestral North Indians (ANI).

Almost all mainland Indians are a mix of ANI and ASI in differing proportions. The steppe ancestry is more pronounced in sections of traditional upper castes, as David Reich, geneticist at the Harvard Medical School, wrote in his study Reconstructing Indian Population History. The reports in Science and Cell found incontrovertible evidence for an 'Aryan movement' post the decline of the IVC: Steppe pastoralist ancestry is absent in the Harappans. This could bear out the inference that the ‘Aryans’ arrived at the later, declining stages of the IVC.

Coinciding with the arrival of the pastoralists, we find a south-eastern movement of the IVC people. That is, they are believed to have moved to an area that is now commonly referred to as south India. Where they migrated to was the big question, with ancient urban settlements not forthcoming in archaeological excavations. Until Keeladi, that is.

The political repercussions are manifold. A recent National Education Policy draft required students in non-Hindi-speaking states to study Hindi and English, along with their regional language. Parties in Tamil Nadu, including the DMK, on Saturday strongly opposed the three language formula, alleging it was tantamount to "thrusting" Hindi and wanted it junked. The issue had led to a major wave of 'anti-Hindi imposition' protests, with the Centre acquiescing in the end by amending the portion. Parties like DMK led by M.K. Stalin and MNM, led by Kamal Haasan, were at the forefront of the agitations.

The findings by the Tamil Nadu archaeological department buttress that long-held belief of the Dravidian parties that the Indus Valley Civilisation script was proto-Dravidian, related to Tamil, as opposed to Sanskrit (Prakrit) as some studies put it. To put it simplistically, this is the very essence of the Dravidian-Aryan debate in India.

Even much earlier, there have been speculations that the Harappans spoke a language resembling the now-defunct Iranian Elamite, which was hypothesised to be related to the Dravidian languages now spoken mainly in south India. Even now, Brahui—a Dravidian family language—is spoken in Balochistan. But, with the Indus Valley Script still undeciphered, no solid proof could be offered to back up the claims. The presence of Tamil-Brahmi in the 6th century BCE urban settlement could be a game changer in that regard.

Politically, Keeladi was always significant. A year back, Stalin had shot off a letter to Culture Minister Mahesh Sharma, seeking action on "stalled excavation" at Keeladi. Several personnel had even faced controversial transfers from the site. "While people of Tamil Nadu were anxiously waiting to know the true and ancient history of the state, in a sudden and surprise move, Archaeological Survey of India has been refused fund and permission to continue the excavation—though in northern and eastern States such excavations are being allowed liberally to continue even for more than ten years. People of the state were not only agitated over this calculated denial, but it also has become a great shock and disappointment to the people," he had then said.

"Each and every one in the state suspects whether the Central advisory board of archaeology is attempting to scuttle the excavations that will bring to light the prestigious and true history belonging to the people of Tamil Nadu. I sincerely hope that you will appreciate the fact that the sentiments of the people should not be in any way hurt by such unilateral and unjust decision of Central Board of Archaeology of India."

After the archaeology department report, Stalin reportedly wanted the BJP government at the Centre to ensure that the Keeladi site was declared a "protected monument" and an “international museum set up to display exhibits”.

Madurai MP Su Venkatesan, a CPI leader and state committee member, and one of the most vocal proponents for the continuation of Keeladi excavation, told The New Indian Express, “The findings have again proved that Tamil is the oldest language and the similarities in the markings discovered in Keeladi and Indus Valley are new keys to rewrite Tamil history.” The CPI(M) has urged the State and Centre to take steps to expand the excavation at Keeladi to bring to fore the site’s archaeological richness. CPI(M) Tamil Nadu State Secretary K. Balakrishnan expounded upon the necessity to expand excavation at the site.