Andhra Pradesh: Why the TDP is protesting in Palnadu 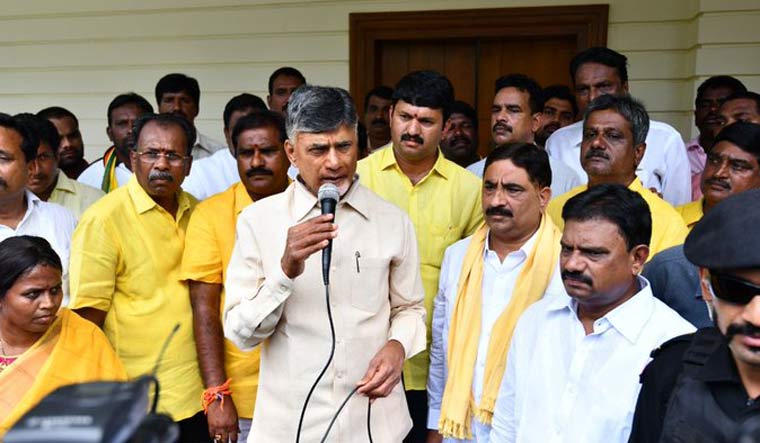 Palnadu has a great history. It is not without any reason that it is called ‘Andhra Kurukshetra’.

The region is remembered for a battle fought in the 11th century, which immortalised many heroic characters. Even today, the term ‘Palnadu pride’ is worn as a badge of honour by the people hailing from the region. Palnadu covers parts of Guntur and Prakasham districts in Andhra Pradesh. Over the years, this belt has witnessed a number of factional feuds and deadly political rivalries.

On Wednesday, the opposition Telugu Desam Party (TDP) and the ruling YSR Congress Party seemed to have drawn inspiration from the spirit of the land as they braced up for first big showdown since general and Assembly elections took place.

The TDP has accused the ruling party of attacking its members in Palnadu. The TDP claimed that families of dozens of its cadre were put up in a rehabilitation camp near Guntur as they were allegedly bring targeted and false cases foisted against them. To highlight the alleged attacks, TDP supremo N. Chandrababu Naidu had called for ‘Chalo Atmakur’, a protest programme in which he would take the workers in the rehabilitation camp back to their village.

Naidu and his son and former minister Nara Lokesh were placed under house arrest by Andhra Pradesh police, who imposed Section 144 in Palnadu. The former chief minister decided to leave his home in Undavalli in Amaravathi capital region on Wednesday morning but was prevented from doing so. Speaking to the media at his residence, he said that he will participate in the Chalo Atmakur programme come what may and criticised the YSRCP government for detaining him. Naidu said around 120 dalit families connected to his party were affected and he would give them protection.

The Andhra Pradesh Police had informed that the TDP did not have the permission to go ahead with the protest programme. Several leaders of TDP were detained or placed under house arrest by the officials.

The DGP of Andhra Pradesh Gautam Sawang informed that Naidu had been placed under house arrest as he was intentionally increasing tension in the region and creating disturbances to law and order.

Meanwhile, tense scenes were witnessed outside Naidu’s residence as TDP workers tried to meet their leader.

The YSRCP also announced a ‘Chalo Atmakur’ programme on Wednesday. Several YSRCP leaders from the region said that their protest was aimed at highlighting the alleged harassment meted out to YSRCP workers during TDP rule.

A number of YSRCP workers, accompanied by MLAs A. Rambabu and V. Rajini, spoke to the media. They alleged that false cases were registered against them at the behest of local TDP leaders between 2014 and 2019. The YSRCP has further alleged that the TDP was resorting to malicious propaganda to defame the ruling party. The YSRCP has alleged that the TDP workers in the camp were being paid to put up a show as per the directions of the party. The Andhra Pradesh Police has not given permission for the YSRCP rally also.

According to political analysts, the TDP, which has been relatively quite since the last three months, is banking on the Chalo Atmakur protest to create a favourable impression in the state. Naidu aims to energise his cadre through this move, the analysts said. It has to be seen how long will this ‘Palnadu war’ last and who wins it.