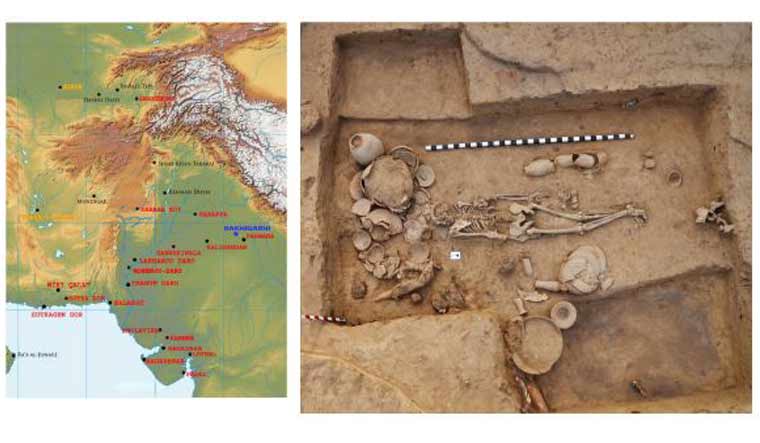 (Left) Geographic location of the archaeological site of Rakhigarhi and other significant Harappan sites, and (right) photograph of the burial and associated typical IVC grave goods | Image courtesy: cell.com

A major confusion surrounding the release of new data on DNA from an individual from Rakhigarhi has been circulating on social media. There have been a number of claims and counterclaims.

The DNA study was an attempt towards elucidating the genetic makeup of Harappan population and to investigate whether any migration pattern is visible through DNA analyses. Results of the study have been misinterpreted as being a ‘final nail in the coffin of Aryan invasion theory’. Aryan invasion theory has long been rejected. It just continues in the popular imagination since it is full of action and drama, which people crave for in entertainment and, I suppose, in history, too.

So, what does the newly published article essentially talk about? The paper published in the journal Cell, observes “A genome from the Indus Valley Civilization is from a population that is the largest source for South Asians. The population has no detectable ancestry from Steppe pastoralists or from Anatolian and Iranian farmers, suggesting farming in South Asia arose from local foragers rather than from large-scale migration from the West.”

Simply put, it says that the population of Indus Valley Civilization did not carry any gene that relates them to the first farmers of Fertile Crescent. That is, domestication of plants, or farming, developed independently in South Asia without any migration of the farming communities from Anatolia. The split of the genetic line between the South Asian population and population in Iranian Plateau happened before the advent of agriculture.

The Anatolian Hypothesis was developed by British Archaeologist Colin Renfrew, in his work Archaeology and Language: The Puzzle of Indo-European Origins (1987), by studying the distribution pattern of Indo-European languages. The hypothesis suggests that the speakers of Proto-Indo-European language migrated to different parts of the world carrying with them the knowledge of agriculture. The current genetic study, along with other studies on beginning of agriculture in different parts of the world, disproves this very hypothesis. It is now understood that agriculture developed independently in different regions of the world, without the need for migrating population. In fact, there are multiple centres of domestication of plants, one of the most important being the Indian subcontinent. Hence, the hunter gatherers of South Asia developed agriculture on their own without the aid of migrants from Anatolia where agricultural society had already been established.

Coming back to the question of Aryan migration, the loosely-called ‘Aryan’ gene—the R1a1 gene—which relates the present-day population of some parts of India to the Central Asian Steppe population, is absent in Rakhigarhi skeleton. Well, that is quite obvious. The migration of people from the Steppes of Central Asia into the Indian subcontinent is understood to have happened after the decline of Indus Valley Civilisation, so it is natural that their genes would not be found in the inhabitants of sites belonging to IVC.

This work is a major step towards a clearer understanding of our genetic lineages, similarities and differences. More DNA samples from individuals belonging to different periods in the pre-history of Indian subcontinent would throw more light on migration patterns and lineages.

The author is a PhD Fellow in the Dept of Archaeology & Ancient History, MS University of Baroda, Vadodara