The study claims Harappans and Vedic people are same 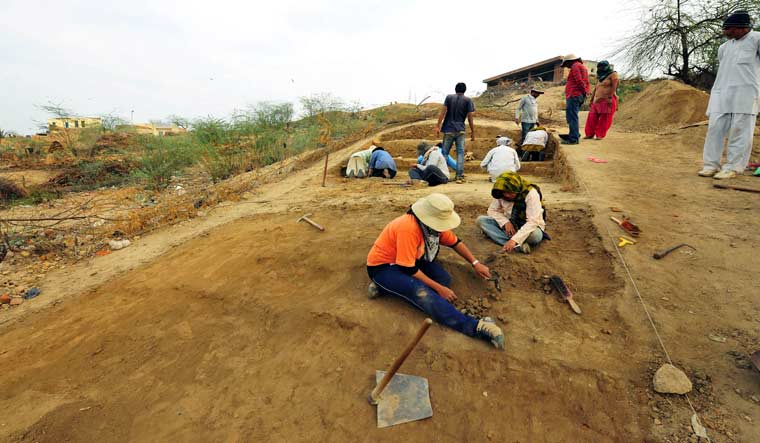 Rakhigarhi is the largest Harappan site in India | Aayush Goel

In a major finding that could impact the understanding of Indian ancestry, the DNA study of a 4500-year-old skeleton found in Rakhigarhi, in Haryana, suggests that modern people in India are likely to have descended from the same population.

These path-breaking insights came to light after scientists were able to sequence genome from the skeleton of a woman and study the archaeological evidence found in Rakhigarhi, a village located some 150 kilometers from Delhi.  Rakhigarhi is the largest Harappan site in India.

“The ancient-DNA results completely reject the theory of steppe pastoral or ancient Iranian farmers as source of ancestry to the Harappan population. This research also demolishes the hypothesis about mass human migration during the Harappan time from outside South Asia,” Prof Vasant Shinde, director of the Rakhigarhi project, said.

Shinde said the new breakthrough completely sets aside the Aryan migration or invasion theory. “The skeletal remains found in the upper part of the citadel area of Mohenjodaro belonged to those who died due to floods and not (of those) massacred by the Aryans as hypothesised by Sir Mortimer Wheeler. The Aryan invasion theory is based on very flimsy ground,” Shinde said, adding that the history being taught to us in text books should now be changed.

The DNA revealed that there was no migration or inclusion of any Iran or Central Asian gene into Harappan people. "There is a continuity till the modern times. We are descendants of the Harappans. Even the Vedic culture and (that of) Harappans are same,” Shinde said.

“This research, for the first time, has established the fact that people of Harappan civilisation are the ancestors of most population of South Asia. For the first time, the research indicates movement of people from east to west. The Harappan people's presence is evident at sites like Gonur in Turkmenistan and Shahr-i-Sokhta in Iran. As the Harappans traded with Mesopotamia, Egypt, Persian Gulf and all over South Asia, there are bound to be movements of people resulting into mixed genetic history,” he added.

These revelations assume political significance as there have been demands to rewrite the history books to say that Vedic people were the original inhabitants of the country and they did not come from Central Asia. “Our premise that the Harappans were Vedic people thus received strong corroborative scientific evidence based on ancient DNA studies,” he added.

Another significant claim in the study published in the scientific journal Cell, titled "An Ancient Harappan Genome Lacks Ancestry from Steppe Pastoralists or Iranian Farmers”, is that farming was not brought to South Asia by large-scale movement of people from the Fertile Crescent where farming first arose. Instead, farming started in South Asia by local hunter-gatherers.

As the study results were published, separate statements were issued by Harvard Medical School which had collaborated in the study.

"Even though there has been success with studies of ancient-DNA from many other places, the difficult preservation conditions mean that studies in South Asia have been a challenge," says senior author David Reich, a geneticist at Harvard Medical School, the Broad Institute, and the Howard Hughes Medical Institute.

In this study, Reich, along with post-doctoral scientist Vagheesh Narasimhan and Niraj Rai, who established a new ancient-DNA laboratory at the Birbal Sahni Institute of Palaeosciences in Lucknow, led the preparation of the samples. They screened 61 skeletal samples from a site in Rakhigarhi, the largest city of the Indus valley Civilisation. A single sample showed promise: it contained a very small amount of authentic ancient DNA. The team made over 100 attempts to sequence the sample. Reich says: "While each of the individual data sets did not produce enough DNA, pooling them resulted in sufficient genetic data to learn about population history."

The authors of the study, however, have a word of caution. “Analyzing the genome of only one individual limits the conclusions that can be drawn about the entire population of the Indus Valley Civilization.”