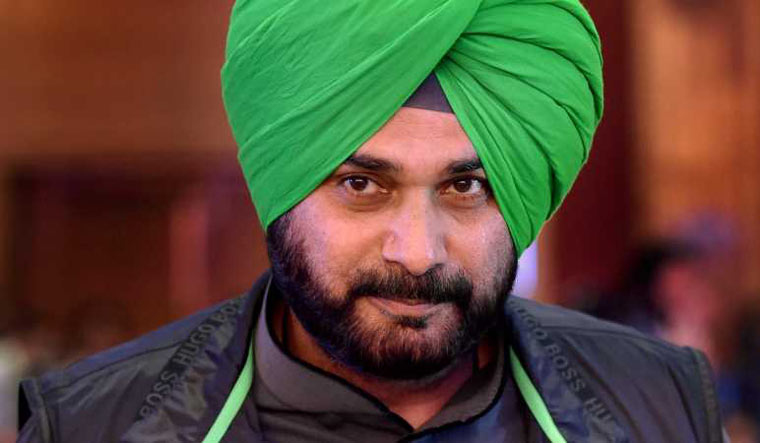 Controversial leader Navjot Singh Sidhu has been divested of the local bodies portfolio and made the minister for power and energy as Punjab Chief Minister Capt. Amarinder Singh reallocated portfolios of his cabinet colleagues.

This came at the end of a dramatic day when a defiant Sidhu boycotted the cabinet meeting and there were even speculations that he might be dropped from the cabinet.

A former cricket player and comedian, Sidhu joined the Congress ahead of the 2017 assembly elections in the state. The chief minister may have been okay with having Sidhu, who had turned against the Shiromani Akali Dal's first family –the Badals. The Badals were also the main rivals of the Congress leaders'. Sidhu had also turned against the BJP, which he quit before cooling his heels, doing no politics but only TV shows, as he hunted around for the right party. He had even met AAP supremo and Delhi Chief Minister Arvind Kejriwal. It was only then that he joined the Congress, saying it was at the behest of party president Rahul Gandhi.

Whether Sidhu and Singh got along personally at that point in time was not clear. Both focussed on the campaign. It was clear, however, that it was Singh who led the Congress in Punjab to a spectacular victory in the assembly elections, where the AAP became the main opposition party, and the SAD was humbled to a poor third position.

Sidhu felt his contribution deserved to be acknowledged by the Congress. Despite the general feeling that he may be no more than a star campaigner of the party across the country, he was made a minister in the state. Not the deputy chief minister which he hoped to become. From tourism and culture to local bodies, Sidhu's portfolios were changed. Not without reason.

When he was the minister  for tourism, his continued presence on television shows landed him in a controversy. Sidhu reasoned that he had to earn a living to maintain the lifestyle he lives. The chief minister saw no harm in that, if the Constitution was not violated, and referred the matter to the legal experts. It was okay for Sidhu to be on TV, and he continues to be seen regularly. But the chief minister decided to shift him out of the culture ministry. Punjab's culture has always been a joke, and Sidhu on TV would not be doing anything to bring it to a level where it is considered aesthetic and classic.

Sidhu took his role as the local bodies minister seriously, and there was no issue on that front. But Singh began seeing a defiant Sidhu pretty soon. When he was invited by fellow cricketer  Imran Khan for his swearing in as the prime minister of Pakistan, the Captain's advice, like that of others in the Indian establishment, was that Sidhu should not go. It is a personal invitation, said a stubborn Sidhu, who went in his personal capacity.

More came after Sidhu crossed the borders. He hugged Pakistan Army Chief Qamar Javed Bajwa, much to India's and Singh's ire.  “How can we tolerate that? How can our Army personnel who are getting killed by Pakistan-backed terrorists tolerate that?,” asked a furious Singh. But with time it appeared, that too, kind of settled down. But it had not.

Sidhu blamed Singh for his wife, Navjot Kaur, not getting the Congress ticket to contest Lok Sabha electins from  Chandigarh parliamentary constituency. He decided to tour the rest of the country instead of campaigning in Punjab, and eventually returned, it is believed, at the behest of Priyanka Gandhi, to add stardust to the Congress campaign. BJP had Sunny Deol , Hema Malini, Dharmendra, Kirron Kher and Anupam Kher all over the place.

But the show down didn't end. The chief minister, who had set his eyes on winning all the 13 seats, was disappointed at winning eight. He was particularly upset over the Congress's defeat in Bhatinda, where Sidhu, while talking of the sacrilege of the Granth Sahib during the Badal reign, had questioned the Congress government's failure to arrest the culprits. Singh believes that  had Sidhu not taken that stand, SAD's Harsimrat Kaur Badal  would not have won. Given the margin of a little over 20,000 votes, the chief minister is possibly right.

Right from the day Sidhu made the remarks against the Congress government, the chief minister has been angry. Now he has blamed Sidhu's performance as local bodies minister for the party's failure to do well in cities.

Sidhu, defiant as ever, stayed away from a cabinet meeting on Thursday, and live-streamed a press conference at his house. “It is a collective responsibility. My department has been singled out publicly. One must have the ability to see things in the right perspective. I cannot be taken for granted. I have been a performer throughout. I am answerable to the people of Punjab,” said Sidhu, as he adduced statistics to show the party had done well in the urban areas. Urban votes generally help the BJP which won all the three seats it contested as part of its seat-sharing arrangement with the SAD, which won only two out of 10 constituencies.