BJP may or may not win a seat, but it set the agenda for Lok Sabha polls in Kerala 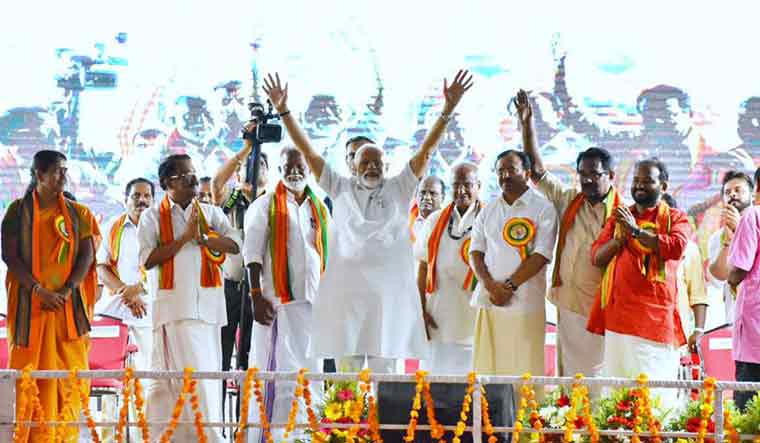 “It was 1948. Sardar Patel, while on a visit to Kerala capital, was travelling through the Chalai market. Suddenly, he asked the driver to stop (the vehicle). There was a green flag fluttering in one of the shops. He was shocked to see the Muslim League flag and asked accompanying Congress workers about how come the flag of a party that divided the country was up there. He demanded that the flag be removed and it was done. Only then, did he proceed (from the spot)...” Thus goes a story that is widely quoted at many BJP conventions in Kerala.

One may wonder about the significance of the 60-year-old incident in the current Lok Sabha elections. Well, the answer lies in the fact that Kerala, perhaps for the first time ever, witnessed an election where the political discourse was all about religion and caste. It was an election during which ideology surrendered to identity politics, thanks to the Sabarimala issue.

Though the Election Commission had barred political parties from using it, Sabarimala emerged as the central theme, or rather the only theme, dominant in the political narrative across Kerala. There was nothing covert in these discussions about faith—a sharp contradiction to the secular, tolerant fabric that the state had been always known for.

During the campaign phase, every Hindu candidate—from both the Congress and the BJP—competed to wear their Hindu identities on their sleeves. Most of these candidates appeared with sandalwood paste on their foreheads, and all of them frequented temples.

Naturally, the candidates from the Left front felt pressed to the wall by this overt display of religion. Soon, they also tried their hand at selling their caste and religious identities.

Ayodhya of the south

The entire (dis)credit for pushing Kerala into the cauldron of identity politics goes to the BJP. It set the agenda and every other party had to fall in line. While the BJP and the Congress competed with each other to prove their merit as the “guardian angels of faith”, the CPI(M) tried to save its skin by vowing that it did nothing to hurt believers' sentiments.

“Ideology has been subsumed by identity politics. It is quite sad that the only reference point in this election is Sabarimala,” said John Samuel, a public policy expert and leader of Ekta Parishad. “It is not that religion and caste were absent in Kerala's political scene. It was always there as a subtext; but this time it became the central theme,” he added.

It is a fact that Sabarimala has divided the Kerala society like never before and many feel that it was only natural for it to become the main topic of discussion during the election season. “Nobody will be able to stop us from using Sabarimala,” said BJP leader M.T. Ramesh.

The BJP did turn Sabarimala into a “golden opportunity”. The controversy gave enough leg room for the BJP; in no time, it has succeeded in turning the decades-long bi-polar electoral scenario in Kerala into a triangular one. The party started getting equal media space as the other two fronts and its candidates are getting equal, if not more prominence in the social media.

The Sabarimala issue was also used by the BJP leaders, including Prime Minister Narendra Modi, in all the southern states where Lord Ayyappa has a huge number of followers. “Sabarimala is our new Ayodhya,” a senior RSS leader, who is in charge of elections in Kerala and Karnataka, told THE WEEK.

The fact that Congress President Rahul Gandhi chose a constituency like Wayanad where the minority population is very high helped the BJP further. “Rahul Gandhi ran away from Amethi and found refuge in a place where majority of the country is a minority” is a preferred statement by PM Modi himself.

However, the Congress party is least worried. It hopes that the anti-incumbency against the central government and the Sabarimala factor would work in its advantage. The party, like the BJP, positions itself as the “protector of faith”. “We have always maintained that no government has the right to infringe upon the faith of anybody. While the CPI(M) trampled upon the faith and beliefs of the common man, the BJP turned the whole issue into a violent one. Keralites are basically peaceful people and they will vote for the Congress party,” said Congress leader K. Muraleedharan.

When Sabarimala became the sole reference point, the ruling LDF, which facilitated the entry of women into the hilltop shrine following a Supreme Court verdict in September 2018, is in the back foot. Many blamed the intrinsic handicap of the Left, especially the CPI(M), to understand and decipher faith. Chief Minister Pinarayi Vijayan, who took the SC verdict as a political agenda, is under scanner. “If the LDF manages to get a decent number of seats despite the Sabarimala controversy, the entire credit will go to Pinarayi Vijayan. But if the Left fares badly, then he will have to pay the price for miscalculation,'' said A. Raghunath, a political observer.

While the macro picture is certainly in favour of the UDF—thanks to the possible shift of upper caste Hindu votes from the Left and the strong consolidation of Muslim community in favour of the Congress—the BJP is trying all its strategies to bag its first ever LS seat from Kerala. The party had managed to secure its first ever assembly seat in the last assembly elections after decades-long efforts. This time, there is a three-corner fight in at least four Lok Sabha constituencies—Thiruvannathapuram, Pathanamthitta (where Sabarimala is situated), Thrissur and Palakkad.

At the same time, the fact that the BJP decided to concentrate more on the central and southern constituencies, ignoring Kasargode constituency in the north where it has strong roots, is also being curiously watched. “The BJP's main focus is not this election; this is just a preliminary for the 2021 state elections. Its decision to concentrate in the heartlands of Kerala is part of that,” said Raghunath.

While both the UDF and the NDA are playing the religious card, the Left does feel the heat. But they, certainly, are not showing it. “It is deliberate that the Congress and the BJP are using the Sabarimala card. But we are least worried,” said CPI(M) state secretary Kodiyeri Balakrishnan.

The reason behind this “unbelievable confidence” lies in the social engineering that the LDF has managed in the post-Sabarimala scenario. While the party does accept the reality that it may lose a good chunk of upper caste/class Hindu votes due to Sabarimala, the prevailing view in the LDF is that that loss will be compensated through dalit votes. “The party had been consistently losing the dalit votes in the previous four elections. But the Sabarimala issue has consolidated the dalits strongly in favour of the LDF. Their numbers would be more than double than of the Nair votes that the Left may lose,” said State Planning Board member R. Ramakumar, who is also a faculty at TISS.

This view was corroborated by Punnala Sreekumar, leader of Kerala Pulaya Maha Sabha (KPMS). “Those who opposed the entry of women in Sabarimala belong to a bygone era. The slogans of equality and reformation raised by the Left have found strong resonance among the backward castes,” he said. “It is only natural that media will notice the movement of upper caste Nair votes and will fail to notice the shift among the dalit votes,” he added. “Expect the unexpected on May 23.''

However, not everyone is ready to buy this. “The general mood in the state is totally in favour of the Congress. Both the majority community and the minorities are against the government. No amount of social engineering will be able to surpass it,” countered Joseph Vazhakkan, Congress leader. He also vouched that the BJP would not open their account in Kerala. Kerala CM Vijayan has also said repeatedly that the BJP would not win any seats in the state.

They might be right—the BJP may not open an account in Kerala this time. However, it has certainly won in deciding the agenda of the current elections.