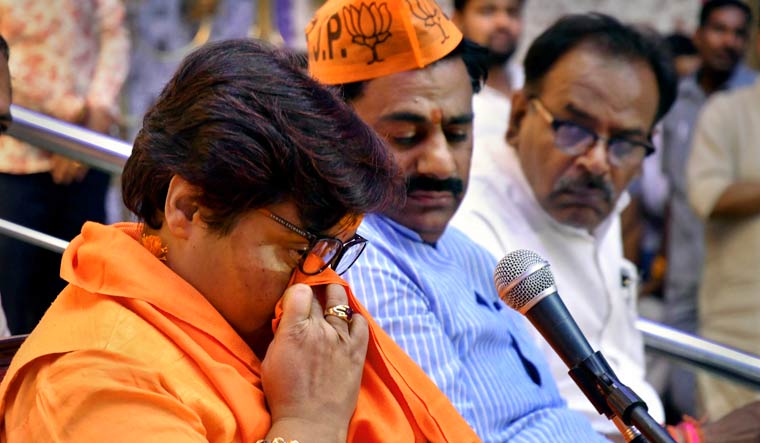 A day after prime minister Narendra Modi defended his party's ticket to Pragya Singh Thakur in a television interview, PTI reports that the Election Commission (EC) plans to issue a notice to the Malegaon-blast accused and BJP candidate from Bhopal, over her remarks against 26/11 martyr Hemant Karkare.

Speaking to PTI, District Election Officer and Bhopal Collector Sudam Khade said that “We took suo motu cognisance of the statement and sought a report from the assistant returning officer (ARO) on the matter. We got the report this morning and we are going to issue notices, which are returnable within 24 hours, to the organiser of the programme and the person who made the statement," told PTI.

Thakur sparked controversy on Thursday during an address to BJP workers in Bhopal, when she claimed that Karkare died because she had "cursed" him for torturing her.

However, after her remarks kicked up a row, she tendered an apology on Friday. “I felt that the enemies of the country were being benefited from it (my remarks), so I take back my statement and apologise for it. It was my personal pain,” she was quoted by an aide as saying.

Khade added that "We are going to send the ARO report to the EC." According to him, the organiser of the event where Sadhvi spoke had received permissionon the basis of the conditions under the model code of conduct, which was in force at the time.

According to another EC official, as per the conditions set before giving permission to the event, use of objectionable language to defame a particular person had been prohibited.

Out on bail, Thakur (48) has been discharged by a court on charges under the stringent Maharashtra Control of Organised Crime Act (MCOCA) in the 2008 case, but is still facing trial under other criminal provisions, including the Unlawful Activities (Prevention) Act.

The BJP on Wednesday fielded her from the Bhopal seat, where she is set to have a direct contest with Congress heavyweight and former Madhya Pradesh chief minister Digvijay Singh.

Her statement against Karkare raised a political storm Friday with opposition parties attacking the BJP and the Congress demanding an apology from Prime Minister Narendra Modi.

However, the saffron party distanced itself from her comments, saying it was her "personal view" which she might have made "due to years of physical and mental torture".