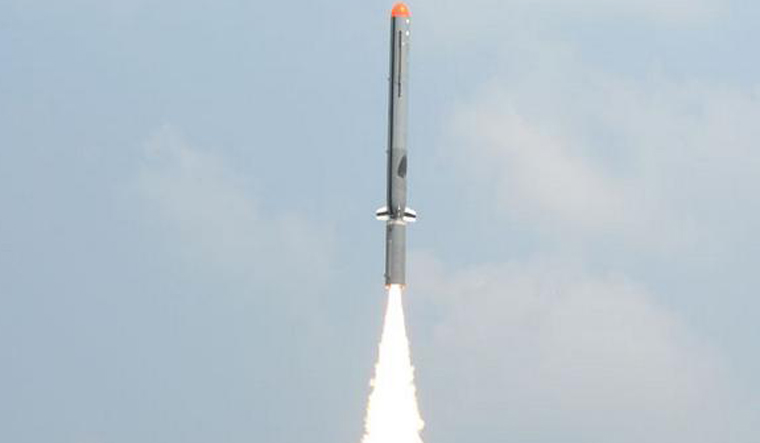 A Nirbhay missile test in 2014 | Twitter handle of PIB

India successfully tested its indigenously built Nirbhay cruise missile off the coast of Odisha on Monday.

According to media reports, this is the sixth test of the Nirbhay, which is a subsonic cruise missile, distinct from the supersonic Brahmos. The Nirbhay was first tested in 2013. The Nirbhay missile had a problematic development, with some of the early tests experiencing failure. Jane's Defence Weekly reported in February that problems related to the missile's flight control software and hardware had been rectified.

According to the Defence Research and Development Organisation (DRDO), the Nirbhay cruise missile uses a turbofan engine and uses inertial navigation and GPS guidance to reach its target. The Nirbhay has a range of around 1,000km. The Nirbhay is similar in concept to the US Navy's Tomahawk cruise missile. The Nirbhay can navigate to its target by flying past preset 'waypoints' on its route, often flying at very low levels.

According to Jane's Defence Weekly, the DRDO was to conduct the “final development trial” of the Nirbhay in April and the missile could soon be moving to “production-standard configuration, followed by the operational testing phase”. The publication quoted an official of the Aeronautical Development Establishment as saying there was a proposal to develop an air-launched variant of the Nirbhay within two-three years, which could be launched from the Su-30MKI fighter.

Cruise missiles like the Nirbhay are considered more versatile than the Brahmos as the former can be re-targeted more effectively in flight and can “loiter” in flight, scouting for targets. Subsonic cruise missiles are also lighter and smaller in dimension, allowing for deployment via submarine-torpedo tubes.