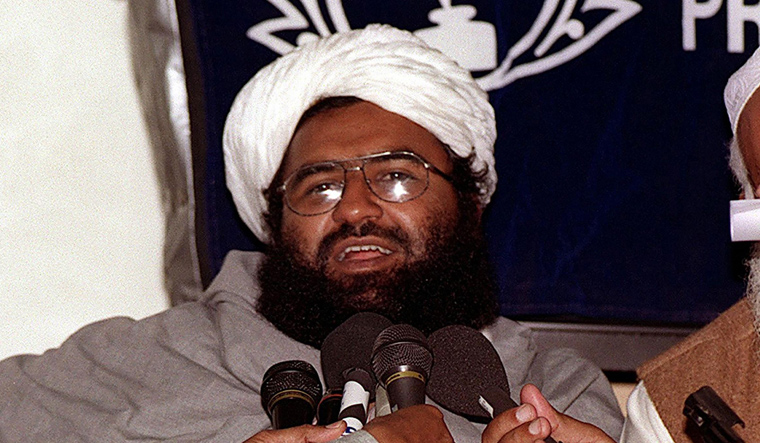 Massod Azhar, the founder of the dreaded terrorist group Jaish-e-Mohammad (JeM), is suspected to be afflicted with renal failure and is under regular dialysis at an army hospital in Rawalpindi in Pakistan, Indian security officials in New Delhi said on Saturday.

"Recent reports indicate that Masood Azhar is now afflicted with renal failure and is under treatment and regular dialysis at the army hospital in Rawalpindi, the headquarters of the Pakistan Army," a senior security official said.

Qureshi said on Thursday, "He is in Pakistan, according to my information. He is unwell to the extent that he can't leave his house, because he's really unwell."

The Jaish-e-Mohammad chief was a close associate of Osama bin Laden, terror motivator in several African countries and also known by many as the Pakistani cleric who brought jihad into the religious discourse at mosques in the UK, the official said.

The influence of the 50-year-old overweight terrorist mastermind was so huge that, when he was released by India in exchange for freeing the hijacked Indian Airlines aircraft IC-814 on December 31, 1999 in Kandahar, Laden hosted a banquet for him the same night.

In the banquet, Laden recalled how he and Azhar had first worked together in 1993, the official said.

Azhar was arrested for preaching jihad in Jammu and Kashmir in 1994. One of his British recruits, Omar Shaikh, as a member of the terrorist group Harkat-ul-Ansar (HuA), kidnapped four western tourists in India in 1994 in order to secure the release of Azhar.

However, security agencies succeeded in releasing the hostages and arresting Shaikh. Again in 1995, five western tourists were kidnapped by HuA and eventually killed in order to gain the release of Azhar.

Almost immediately after Azhar's release, Jaish-e-Mohammad was formed and it carried out its first suicide attack in Jammu and Kashmir in April 2000 by striking the Badami Bagh cantonment in Srinagar.

The 24-year-old bomber, Asif Sadiq, was one of Azhar's earliest recruits and a student from Birmingham. At this time, Azhar also began using several al-Qaeda recruits, another official said.

In1979-1989, after he suffered injuries in the Soviet-Afghan War, he was chosen as the head of Harkat-ul-Ansar's department of motivation.

In the early 1990s, Azhar became the general secretary of Harkat-ul-Ansar and visited international locations to recruit, raise funds and spread the message of pan-Islamism.

Among his destinations were Zambia, Abu Dhabi, Saudi Arabia, Mongolia, the United Kingdom and Albania, the second official said.

Azhar also went to Kenya to meet an al-Qaida affiliate in Somalia in 1993. In August 1993, Azhar entered the UK for a speaking, fundraising and recruitment tour with the message of jihad.

Azhar made contacts in Britain with people who helped provide training and logistical support for terrorist plots.

In January 1993, Azhar visited Bangladesh along with Sajjad Afghani, a terrorist leader, to facilitate the intrusion of Afghani to India.

The Jaish was responsible for the attack on the Indian Parliament on December 13, 2001, in which nine security personnel and officials were killed.

On January 2, 2016, a heavily armed group of the Jaish attacked the Pathankot airbase in which seven security personnel were killed. The Jaish also carried out the attack on the Uri brigade headquarters on September 18, 2016, killing 17 soldiers and injuring 30 others.

On February 14 this year, the Jaish carried out a suicide attack on a CRPF bus in Pulwama in Jammu and Kashmir, killing 40 jawans.