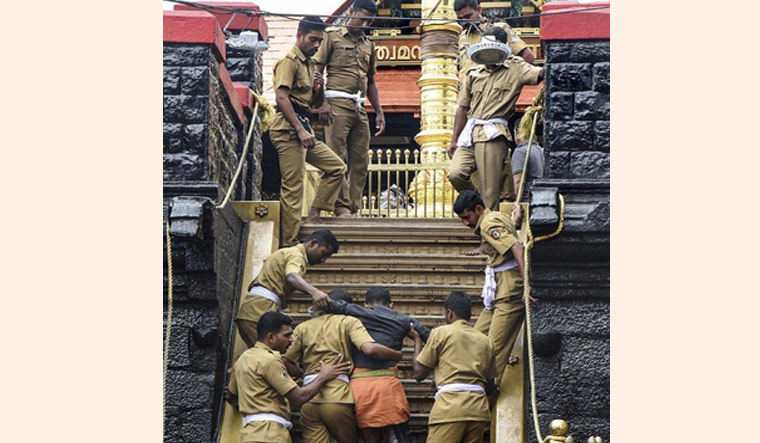 Policemen helps the devotees to climb up the 18 sacred steps for offering prayers at the Lord Ayyappa shrine, in Sabarimala | PTI

Nobody knows exactly when girls and women of reproductive age were forbidden from offering prayers at Lord Ayyappa shrine in Sabarimala, but a 19th century British survey report says the ban was in place even 200 years ago.

Amid the rancour-filled debate and protracted protests over allowing girls and women in the 10-50 years age group into the temple, the colonial era document compiled by two British military officers is considered a vital document by those who believe the ban was part of a centuries-old tradition and should continue.

The Supreme Court's historic September 28 verdict lifting the ban, hailed by rights activists but panned by traditionalists, has set off intense protests by the Hindu right as also political parties like the Congress and the BJP.

According to the "Memoir of the Survey of the Travancore and Cochin States", published in two volumes by the then Madras government, women of menstruating age were denied entry into the Sabarimala temple even two centuries ago.

Though Benjamin Swain Ward and Peter Eyre Conner, lieutenants of the Madras Infantry, completed the survey by the end of the year 1820 after nearly five years of research, it was published in two volumes in 1893 and 1901.

"Old women and young girls may approach the temple, but those who have attained the age of puberty and to a certain time of life are forbid to approach as all sexual intercourse in that vicinity is averse to this deity (Lord Ayyappa)," the report said.

Justice Indu Malhotra, the lone woman judge and the only dissenting voice on the 5-judge Constitution Bench that overturned the ban dubbing it as unconstitutional, had in her order referred to the Ward and Conner's survey.

Noting that the report is an authentic historical document on the erstwhile princely states of Travancore and Cochin (Kochi), historian M G Sasibhooshan said the ban was an "unwritten law" for a long time.

"As mentioned in the report, there were restrictions for women belonging to a particular age group in Sabarimala. It was informal but unwritten law for decades," he said.

The restriction, however, got legal ratification and acceptance following a Kerala High Court judgement in 1991, he said.

Sasibhooshan, however, said on "very, very rare" occasions some women in the traditionally barred age group visited the hill shrine unaware of the custom.

The survey report has detailed discription of "Chowrymulla", as the place was referred to by the two officers.

At one place the report says the hill shrine was dedicated to "Chowrymulla Shasta" (Lord Ayyappa), while in another the document calls it the "temple of mountain deities".

The Memoir says the small temple covered with copper plates was built on an elevated mound faced with stone.

It also has references to the flight of 18 granite steps called 'pathinettam padi'. The sacred steps were later covered with plates made of 'panchaloha', an alloy of five metals— gold, silver, copper, iron and tin— during the 1980s, according to temple sources.

The survey report says even in those times the temple attracted a huge inflow of pilgrims.

"The annual festival takes place on the 12th of January and continues for a period of 5 days. Devotees from the most remote parts of India visit it, the number yearly amounting to 10,000 to 15,000," it said.

Reprinted by the state-run Kerala Gazetteers Department in the year 1994, the Memoir also talks about people making gold and silver offerings at the steps in times of distress like sickness.

Besides, the Memoir talks about the large flocks of elk, buffaloes, wild sheep and elephants in the "swelling hills" of Sabarimala, located on the mountain ranges of the ecologically fragile Western Ghats.

While the survey report suggests existence of the ban on entry of women of reproductive age group into the shrine, rights activists insist there were several instances of them visiting the place.

T K A Nair, a career civil servant and adviser to former prime minister Manmohan Singh, said his 'choroonu', the first rice feeding ceremony of a baby, was performed at Sabarimala with his mother feeding him in her lap in 1939.

Kannada actress Jayamala's claim that she had touched the idol of Lord Ayyappa, the shrine's eternally celibate deity, when she was 27 had sparked a row.

There were also claims that the queen mother of the erstwhile Travancore princely state Sethu Parvathy Bayi had visited the temple when she was in the barred age group.

Sasibhooshan, however, said the Travancore royal family had already clarified the matter.

"It is true that the queen mother had visited the shrine at the age of 42 years. But the royal family had made it clear that her uterus had been removed and so she was eligible to go and offer prayers at Sabarimala even at that age," he said.

Akkeeraman Kalidasa Bhattathirippad, a former president of Yogakshema Sabha, an organisation of Namboodiri Brahmins of Kerala origin, said the restriction was a centuries-old custom.

Bhattathirippad, who is also the patron of Thantra Vidya Peeth, said purification rituals were carried out whenever the head priest came to know that women and girls in the age group of 10 and 50 had entered the temple because of lack of awareness about the custom.

Though 55 days have gone by since the Supreme Court delivered its historic verdict, no woman or girl of the barred age group has been able to set foot in the hallowed precincts of the temple.

Several women made valiant but vain efforts to trek to the hill shrine but were turned back by obstreperous protesters.