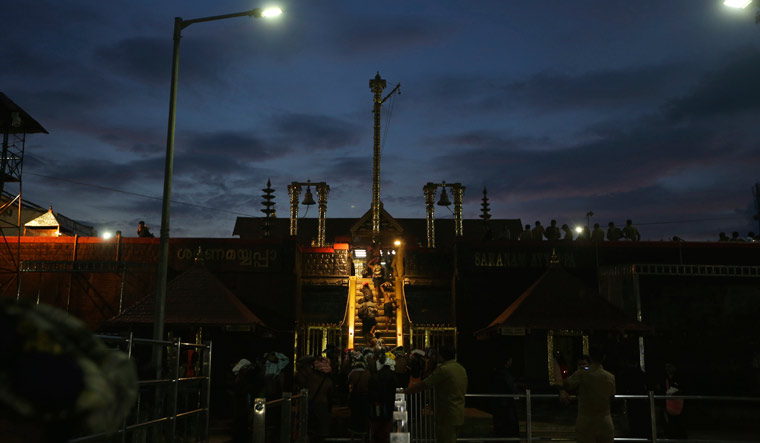 The Kerala government on Monday strongly opposed a plea by a BJP functionary, seeking to restrain non-Hindus and non-idol worshippers inside the Sabarimala temple, saying the hill shrine was a "secular temple" where devotees of all faiths visit for offering prayers.

In its preliminary objection filed in the court against BJP functionary T.G. Mohan Das's plea, the government submitted that it was an openly debated fact that Sabarimala was originally a place of worship which belonged to tribals.

There is also another school of thought that it was a Buddhist temple and the word 'Saranam' was derived from Buddhism, it said.

Das argued that the entry of non-Hindus and non-idol worshippers into the 'Sannidhanam' (temple complex) violated the Supreme Court verdict and rules of the Kerala Places of Public Worship (Authorisation of Entry) Act, 1965.

Rejecting the claim, the CPI(M)-led state government said it was a historically accepted fact that Sabarimala is a secular temple, where entry of devotees is not restricted on the ground of any caste or religion.

It pointed out that en route to Sabarimala at Erumeli, there is a mosque 'Vavar Palli', where all Ayyappa devotees, irrespective of caste and religion traditionally offer prayers and only then proceed towards Sabarimala.

The government said the famous 'Petta Thullal', an essential part of the Sabarimala pilgrimage, starts from the Vavar mosque.

It submitted that the famous 'Harivarasanam', the lullaby of Lord Ayyappa, was sung by Padma Bhushan awardee K.J. Yesudas, who is a Christian by birth.

The singer is understood to be a Lord Ayyappa devotee and used to visit Sabarimala and pray there, the government said.

The state said it was a well known fact that several Christians and Muslims are devotees of Lord Ayyappa and go on a pilgrimage to Sabarimala every year.

It said the Waqf Board, Muslim organisations, Vavar Trust, Christian organisations and tribal outfits were necessary parties before taking any decision on the petition.

The government also said when larger public interest of different religions and secular issues was involved, the issue cannot be adjudicated by the court without publication in newspapers and the media.

Earlier, considering the petition by the BJP functionary, the high court had observed that the Lord Ayyappa temple belonged to all and it was a shrine where devotees of all faiths could enter to offer prayers.

Kerala has been on a boil after the September 28 Supreme Court verdict, permitting women of all age groups into the Sabarimala temple, with right-wing and Hindu outfits on a warpath over the state government's decision to go ahead and implement the top court verdict.

The hill shrine had recently witnessed protests by devotees against the attempt by some young women, including journalists, to enter the temple.

The Kerala High Court had recently come down heavily on the agitation at Sabarimala.