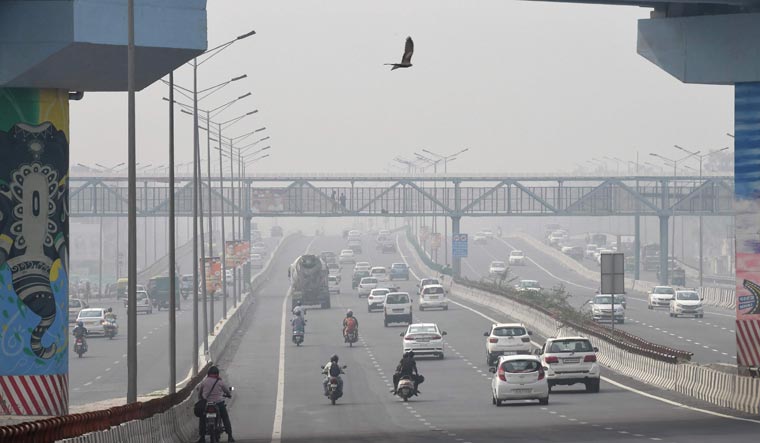 India Gate is doing the disappearing act again. The landmark monument of New Delhi was invisible from Rajpath even at noon on Thursday, thanks to the cloak of smog that has fallen over the capital city. The Air Quality Index (AQI) pointed in the Very Poor category for most parts of the city, and in fact, all the other cities in the National Capital Region—Ghaziabad, Noida, Gurugram and Faridabad. Worse, the System of Air Quality and Weather Forecasting and Research (SAFAR) has predicted that the next three days, too, will continue to remain at Very Poor. A Very Poor AQI is categorised as that which causes respiratory illnesses on prolonged exposure. It is one scale below Severe, a dark red alert when even healthy populations get affected. Last November, Delhi had hit Severe on the AQI scale.

At 3 pm on Thursday, the Air Quality Index recorded 391 in Anand Vihar and 310 at the Income Tax Office (ITO) area.  These recordings are a cause for concern so early into the season, and also because of the rate at which the air quality has deteriorated over this week, dropping from Poor to Very Poor almost overnight.

The concern is even more because this time, the authorities had made some mitigation efforts. The wheezing thermal power plant at Badarpur retired from service a few days ago. The authorities have also constructed peripheral expressways to prevent entry of vehicles, not bound for Delhi, into the city. There has been effort to create awareness among farmers of neighbouring states of the hazards of burning crop stubble, a practice that worsens air quality at a time when the region is at its most vulnerable. It is the time of temperature inversion (due to specific meteorological factors), which means a layer of cold air is trapped under a layer of warm air, thus the pollutants suspended in the cold layer cannot escape. It is also a time when there is very less air circulation, no wind to take the pollutants away.

Last year, the authorities had put in place the Graded Response Action Plan (GRAP), which entails certain actions to be taken as air quality worsens. When in the Very Poor category, it will have to soon order all diesel run generators to shut down, increase frequency of public transport like buses and metros, and enhance parking fees. However, given that the metro is stretched to its limit already, and there is a well reported shortfall of buses, there is not much that can be done by way of enhancing public transport. Also, since most of the parking spots are unauthorised, it is not easy to hike the fee. Anyway, in the absence of augmented public transport, authorities will find it difficult to ask commuters not to get their cars out.

So, Delhiites will have to gasp it out this season as well. Already, smog related ailments are on the rise, with respiratory troubles, wheezing, coughing and migraines being widely reported.

The Arvind Kejriwal government is making plans of sprinkling water from high rises in a bid to wash down pollutants, but if the experiment last year was anything to go by, it would only mean a waste of water and effort.