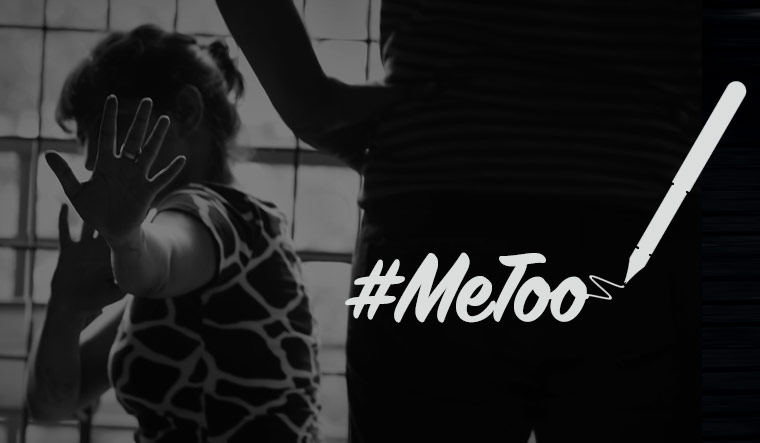 A year after the #MeToo movement spread on social media thanks to Hollywood celebrities and weeks after Tanushree Dutta's renewed allegations against Nana Patekar, the aftershocks of rage against sexual harassment are now shaking Indian media houses.

In the past few days, senior journalists of both 'traditional' print organisations as well as new digital outlets have been accused on social media by former women colleagues of having indulged in sexual harassment. Many women, working with various establishments, are talking of how senior colleagues have given them the proverbial 'glad eye' and attempted to proposition them blatantly. The accusations have been re-tweeted and shared by numerous users with #MeToo.

Not only have mainstream publications such as the Times of India and DNA been confronted with allegations against its senior journalists, but attention has also been focussed on the effectiveness (or lack thereof) of in-house complaints committees against sexual harassment in media houses. Nearly all such accounts have criticism of media organisations turning a blind eye to the glad eye of senior editors and journalists.

THE WEEK attempts to piece together just a handful of the allegations here and will be putting up updates.

K.R. Sreenivas, the current resident editor of the Times of India (Hyderabad edition) was accused by Menon, a one-time colleague, of touching her thighs while dropping her off after work in Bengaluru in 2008. Menon also tweeted similar allegations, purportedly shared privately to her by other women, who claimed Sreenivas harassed them or shared lewd social media messages. Menon also alleged the mechanism to register complaints against sexual harassment with the human resources department of Bennett Coleman and Co. Ltd (BCCL), which owns Times of India, was ineffective. 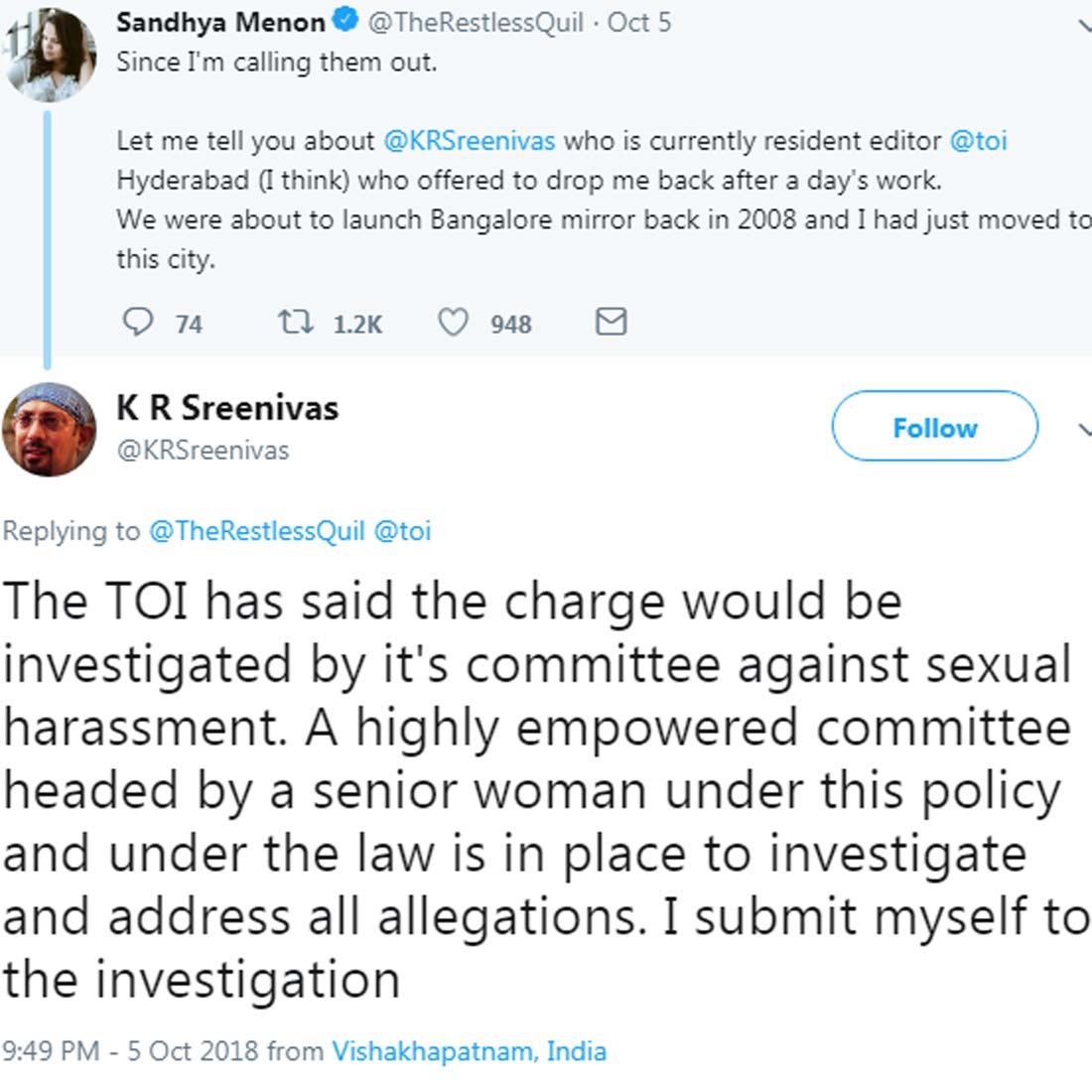 Sreenivas responded to the allegations in a tweet to Menon, saying, “The TOI has said the charge would be investigated by it's committee against sexual harassment. A highly empowered committee headed by a senior woman under this policy and under the law is in place to investigate and address all allegations. I submit myself to the investigation.”

In another tweet, Menon claimed during her time with DNA, the publication's then editor in-chief in Mumbai, Gautam Adhikari, forcibly kissed her after dropping her off at night. Sonora Jha, a journalist-turned-academic now settled in the US, responded to Menon and revealed another instance of abuse by Adhikari when he was the executive editor of the Times of India. Jha, who was chief of the Metro bureau of the Times of India in Bengaluru, alleged Adhikari forcibly kissed her in a hotel in 1995. 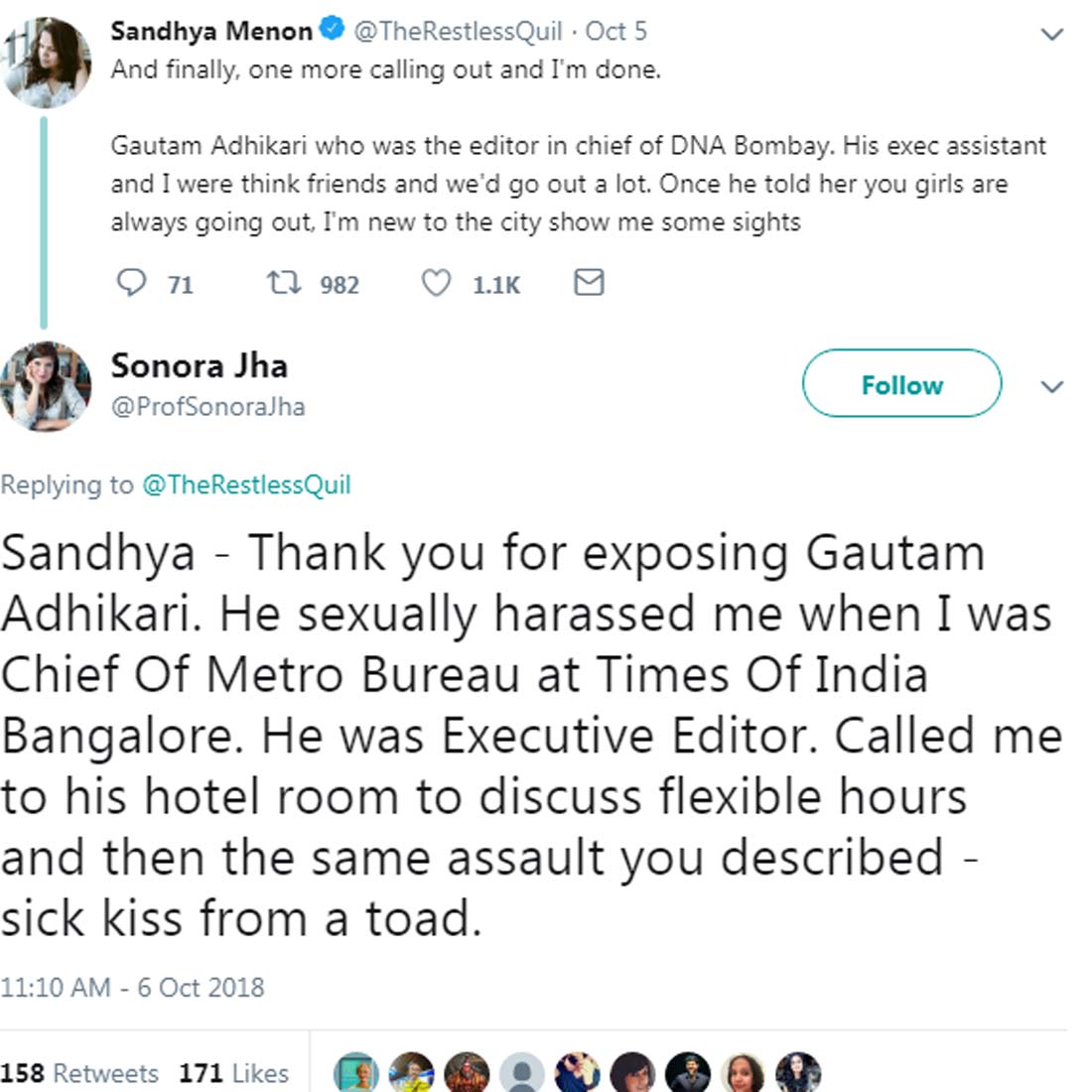 Menon also mentioned that when she was working with the Hindustan Times in 2005 in Mumbai, she was sent a lewd message by Manoj Ramachandran, its associate editor in Delhi.

Similarly, a former Hindustan Times correspondent, Avantika Mehta accused senior journalist Prakash Jha of sexual harassment. Mehta posted screenshots of Whatsapp conversations between her and Jha on Twitter. Following the allegations, Jha has stepped down as the political editor and bureau chief of the Hindustan Times.

Wild allegations about me are doing the rounds on Twitter. ⁦@thewire_in⁩ too has been dragged into it. Here’s my statement about it. I would also urge fellow professional journalists not to fall for rumour and innuendo. pic.twitter.com/6J4uCIOwnv

Sidharth Bhatia, a founder editor of The Wire, a news and analysis portal, was accused by two Twitter users, Bharti Shukla and Remya Sanyal, of passing lewd remarks during his time at DNA, which he helped found. Bhatia issued a formal statement on the allegations on Monday, denying the incidents and claiming he had no knowledge of the two as fellow employees at DNA.

It's not just the mainstream print and digital outlets that are facing the storm. Rama Dwivedi, who works for Outlook, on Saturday put up a post on Facebook detailing how Kashmiri journalist, Fahad Shah, who was her one-time boyfriend, inappropriately touched her at a party. Dwivedi alleges Shah, founder-editor of the online magazine Kashmir Wallah, also molested a mutual friend at the party.

In a Facebook post on Sunday, Shah offered an “unconditional apology” to anyone who felt his behaviour was inappropriate, but claimed the allegations were a “vilification” campaign by his former girlfriend and her friends.

The outpouring of outrage and explosive revelations about sexual harassment by senior colleagues appears to be continuing on social media, with more women journalists coming out into the open, while others who had anonymously complained of harassment are publicly owning up to their statements.