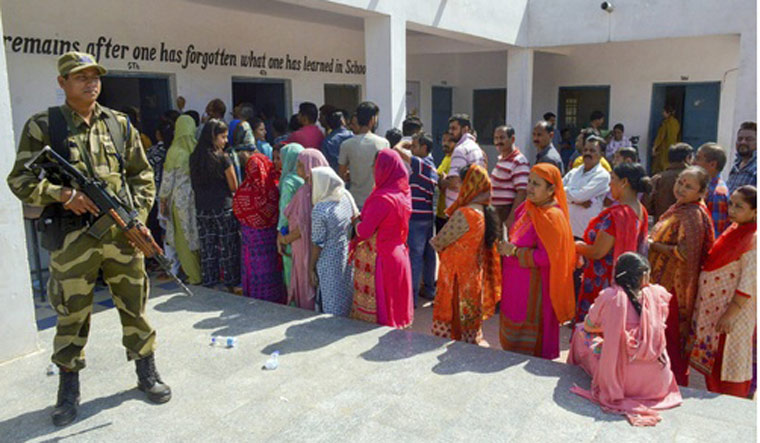 The polling was by and large peaceful | PTI

Amid threats of militant attacks and a boycott call given by the separatists, Kashmir valley recorded a dismal 8.3 per cent polling in the first phase of the civic body polls on Monday. The figures were released by the chief electoral officer of Jammu and Kashmir.

Compared to Kashmir, the Jammu region showed greater enthusiasm in the polls with 61.92 per cent voter turnout. Jammu's Poonch recorded a polling percentage of 73.1 and Rajouri 81.

The polling started at 7am amid tight security and ended at 4pm in 83 wards of Kashmir. Only 7,057 out of 84,692 eligible voters turned up to vote.

The polling was by and large peaceful, an official said.

In south Kashmir's Anantnag district, a mere 7.3 per cent voters showed up at the booths. In Budgam, the voter turnout was 17 per cent.

The National Conference and the Peoples Democratic Party had said they were boycotting the civic polls as the Centre failed to come to the defence of Article 35 A of the Constitution in the Supreme Court. The article, which bars outsiders from settling down in Jammu and Kashmir, has been challenged in the Supreme Court by an NGO backed by the RSS on the contention that it was added in the Constitution by a presidential order and not by an act of Parliament.

In the build-up to the polls, many panchayat ghars and offices were set ablaze by the unidentified persons in south Kashmir.

Some of the candidates withdrew their nominations and circulated the videos of the act on the social media. There were also rampant militant attacks on political workers in the wake of the elections. Two NC workers were killed and another sustained injuries when suspected militants fired at them at Karfali Mohalla in Srinagar. The incident created panic in the area, leading to withdrawal of nominations by candidates.